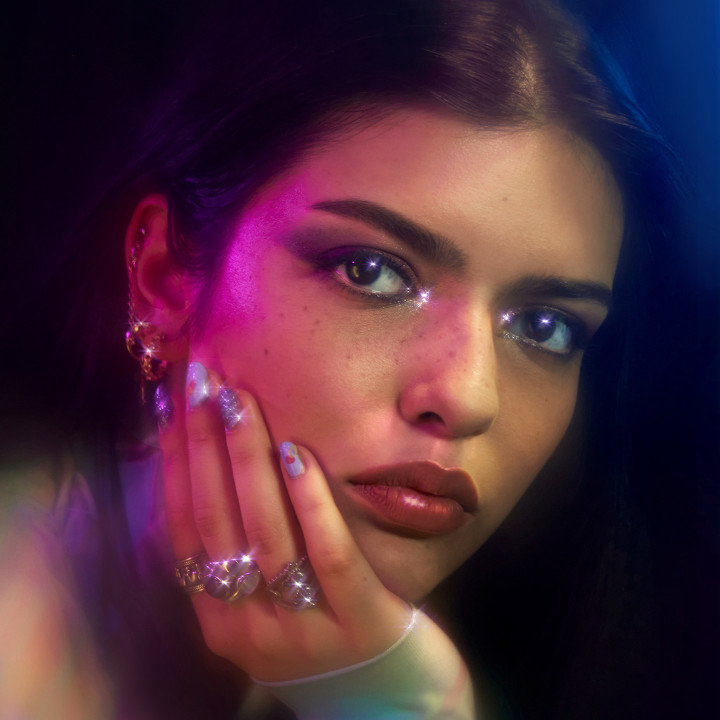 "I try to grasp the weird in between feelings that everyone has but no one describes, like where you feel like you should be happy but you're not, or, if you're at a party, and sort of tune out." yunè pinku's music bottles this disembodied feeling of detachment. The South East London-based newcomer layers wistful, syrupy vocals over production that draws from the UK rave canon but with a restless, textural slant. It's music for pre-drinking while applying eyeliner; the messy afters; the 8am Uber journey home.

For the past four years, yunè pinku has been making music from her bedroom, only sharing her material with close friends and family. For the first two years, she didn't include vocals: it was just "weird soundscapey stuff on GarageBand and I just sort of did it all by ear -- and I still do, to be fair," she says. As well as using her own soft vocals, she'll also record people having public arguments or shouting down the phone, enjoying making something serious sound so silly. "You can make some really interesting things because you can turn voices into sounds," she says. "There's so many different ways of doing it."

In her music, yunè pinku (yunè comes from a nickname she had as a kid and means 'cloudy' in Japanese, while pinku nods to her love of claymation penguin show Pingu) taps into many facets of being a young person in the early 2020s. A love letter to the dancefloors that have been deeply missed throughout the pandemic, her music also expresses an apathy that comes with having your life torn apart at such a crucial time, as well as inhabiting a world at the mercy of capitalism and climate change. "There's an accidental anxiousness to like the music I make," she describes. "Over lockdown I think a lot of people had the time to re-evaluate the relationships they cared about and as we were forced to have a better relationship with ourselves, I think people realised the relationships that weren't doing them any good. So some of my lyrics try to address this bitter or let-down energy to them, I suppose."

Half-Malaysian and half-Irish, yunè pinku grew up in London while never feeling like she was fully welcome there. "It's funny being mixed-race and growing up somewhere where neither parents are from, it's like you belong everywhere and nowhere," she says. She also notes the broad gender gap in electronic music today -- and has found first-hand that women in the industry are expected to work harder. Although she's active in music circles in the city, "I'm yet to meet a girl who produces, really," she says, although adding that "it's still a fairly male world, and I like the idea of being a girl who stays feminine being bang in the middle of all of that."

Traces of her childhood spent growing up in London can be heard in the shuffly garage rhythms of her production, although as a teen she was more into 70s and 80s music like Joni Mitchell, The Kinks, and the Bee Gees than hip-hop or grime. Nowadays, she likes "more experimental, tech stuff where people do something cool vocally with a tune -- like combine things that you wouldn't think to put together." Eartheater is now a big influence on her ("I love how [she] makes these kind of grimy, tech beats and then puts these really church-like, holy vocals over them -- it's the juxtaposition") while Easter and Yeule inspire her vocally, and production-wise she loves Sorry, Photek, SASSY 009 and Prince Innocence.

Having collaborated with rising Australian dance star Logic1000 on 'What You Like,' yunè pinku is on the cusp of releasing her debut solo EP. First single 'Laylo' layers mesmeric dance hooks in clever, textural ways, and is "mainly about having fun but more so in the random way, like taking a train journey to a party, and keeping this bravado or toughness about you," she says. "The project overall is about sort of anxiously attending things and the constant sense of trying to be tougher." 'Bluff' employs scuttly garage drums with golden era UKG bass stabs, while 'Affection' takes on a dubby bassline reminiscent of experimental early 00s post-dubstep, with her voice like a synth cutting into the production.

As well as Logic1000, yunè pinku has been co-signed by Joy Orbison, who invited her to contribute a guest mix to his Radio 1 residency. "I was so happy they took a chance on me, especially considering I didn't have anything out there yet," she says.

Despite her music being influenced by four-to-the-floor sonics, yunè pinku actually prefers smaller parties to all-out raving. "Clubs are just very threatening spaces a lot of the time," she says, "because you have to keep your guard up the whole time, and then there's like the journey back late at night. People get so weird in clubs. It's kind of ironic because I'm weird about going out but then I make dance music, which is a bit funny."