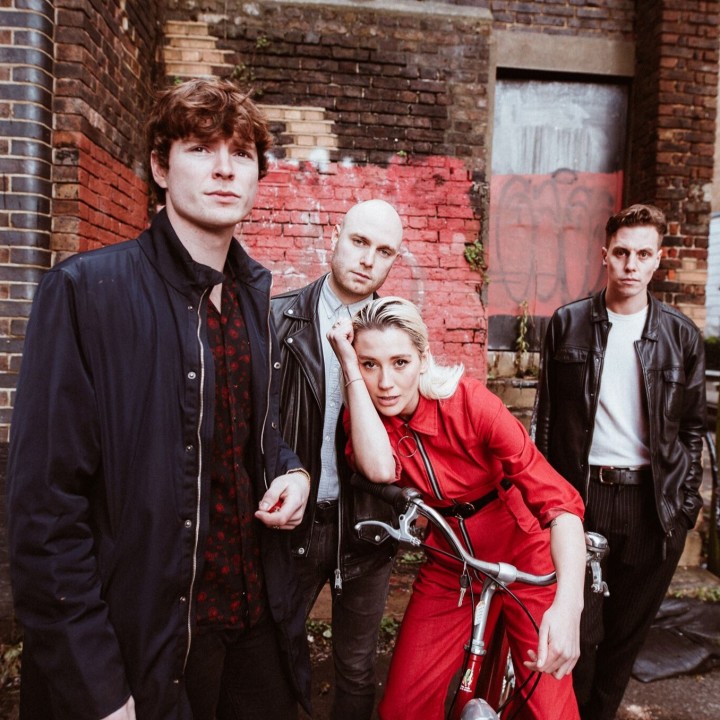 What do you get when you mix tight, raucous riffs, a profusion of pop hooks and uncontainable, frenetic live energy? YONAKA: a four-piece band from Brighton who you can’t quite pin down, but you don’t have to. Because while there is no blueprint to their irresistible, foot-stomping sound, there are many ingredients, and the band weave them into their music like different coloured sequins, somehow making them feel completely fresh in the process.

YONAKA (named after the Japanese word for “dead of the night”) – moved to Brighton in 2010 and met at university four years after. They had each been playing in various bands beforehand, but it was only until they began writing and performing together that everything fell into place, on a creative level. “We just clicked – it was a really weird feeling. We gelled so easily,” Theresa, YONAKA’s formidable vocalist, remembers. “We did our first show just one month after forming the band, and we knew from that moment.”

Since that first gig, they’ve earned a reputation for their exhilarating, eclectic live shows in venues and festivals across the country, where they’ve been known to throw themselves across the stage like water-soaked electrical appliances that have just been plugged in – it’s quite a sight to behold. “We want our audiences to leave our shows feeling really fiery,” Theresa says, laughing. “We want them to have the same adrenaline rush as we do. We actually have this core crew of people that come to all of our shows and they go fucking nuts. It’s been so good to see that grow.” And it would appear that YONAKA’s adrenaline-fueled shows have become quite the ticket, with the band not only quintupling their venue sizes over the past year – in the UK, they went from playing The Borderline to Camden’s Electric Ballroom in a mere 12 months - but they also scooped a support tour with Bring Me The Horizon across the UK and Europe at the end of 2018, bestowing 18,000 faces across the run. “The tour was incredible,” says Theresa. “It made me realise what I wanted this band to stand for and it made us more confident, partly due to the scale of the shows we were playing. We realised that we can do this and we’re ready for it. Being on stage is a liberating process for me; you share your secrets, your vulnerabilities, your life experience. What you love, and what you hate. I have a message to say and I want to deliver that to as many people as possible. As a songwriter and performer, you practice your art for years and you never stop practising, but when it comes to a gig, you have a 30 minute window to show that room what you’re made of: that’s when I come alive.”

Off stage, they’ve unleashed a sundry of tracks and EPs, each managing to bottle that same infectious live energy and DIY spirit. Early release “Ignorance” was an in-your-face grunge pop song, with Theresa’s rich, melodic vocals spread over thwacking drums and the sort of bass line that makes hips and bodies gravitate towards the pit. “I can’t believe I’m in this mess, I can’t stay here, ignorance is not bliss to me,” she sings, before the track explodes. “That track is about feeling alone and lost and like you’re not fitting in,” Theresa explains. “But, you know, it’s also about having an awakening about that and realising that you do have your own place and that you are strong.”

While Theresa was raised on the harmonious heartbreak of The Temptations, The Shangri-Las and The Marvelettes, George and Alex (the bassist) were blasting out Nu Metal and rap classics in their hometown bedrooms, while Rob (the drummer) was watching live videos of AC/DC and Iron Maiden and flicking through music video channels like Kerrang! and Scuzz as a teenager. These days, their listening habits are like pick ‘n’ mix – from Earl Sweatshirt and Kendrick Lamar to Jeff Buckley and Amy Winehouse – an openness and appreciation for music that shows itself both through their avid conversations on the subject, and their genre-subverting musical output.

Move forward, after the release of three EP’s - Heavy, Teach Me To Fight and CREATURE [the latter two saw the band take on production duties] - oh, and lorded as 2018’s 3rd most-tipped band in Great Britain - it was last year’s breakthrough track “Fired Up” that was a true watershed moment for YONAKA. The impassioned slice of pop rock garnered momentous radio support across Radio 1, peaking at No.1 on their Specialist Chart and earning spins from the likes of Annie Mac, Jack Saunders and Greg James.

And now, as the new year starts to unfold, YONAKA are on the cusp of releasing their long-awaited debut album Don’t Wait Til Tomorrow; an 11-track visceral assault on the emotions that delves deep into Theresa’s inner psyche. The album tackles the raw emotions of love, as well as the experiences of mental health on both a personal level to Theresa, and those close to her. “The album title is about reaching out when you’re struggling and getting the help you need,” says Theresa. “I’ve experienced depression and anxiety, as have lots of people around me. I want people to know it’s ok not to be ok. We all need to find a way to cope and speak out about our problems. It’s easy to feel alone in your thoughts but I want to help install that there will always be somebody to talk to…”

Recorded at their regular Brighton haunt, self-produced by the band and engineered by bassist, Alex Crosby, the process has been a cathartic one for the quartet. As a band who’ve commanded a stellar cast of producers over their earlier recordings such as Rodaidh McDonald (The xx, King Krule), Ross Orton (Arctic Monkeys) and Tom Dalgety (Pixies, Royal Blood), what brings one of the most exiting debut UK guitar acts to take on the dizzy heights on self-production, especially when signed to a successful label? “We’ve worked with different producers over our career and as a result of that, it really grew our confidence,” says bassist, Alex Crosby. “But, personally, I’ve always been super passionate about the art of recording and producing. Just like Theresa does with her songwriting, I’m always pushing myself. I love taking sounds and textures that shouldn't really work and melding them together, or employing more modern mixing techniques within a band context. A few of our songs on last two releases were self-produced and we were really happy with the results – we were up for the challenge.”

Front and centre of their musical output, YONAKA consistently refuse to shy away from being in their feels; they haven’t yet released something that isn’t lyrically personal and sonically passionate – they just dive straight in, headfirst. And their union of balls-to-the-wall album tracks are anything but. “Was it hard putting some of my experiences into words? At times, yeah,” Theresa reflects. “Penning and recording the album was a really emotional experience as I was documenting all the dark stuff that resides inside me. We’re super proud of it.”

In the current landscape of low-key bedroom producers, anaemic pop acts and reluctant indie bands, the sound of YONAKA stands out like Satan bursting through the gates of heaven. With music that is brimming with life and chaos, they take you by the scruff of the neck and force you to listen - in the best way possible.