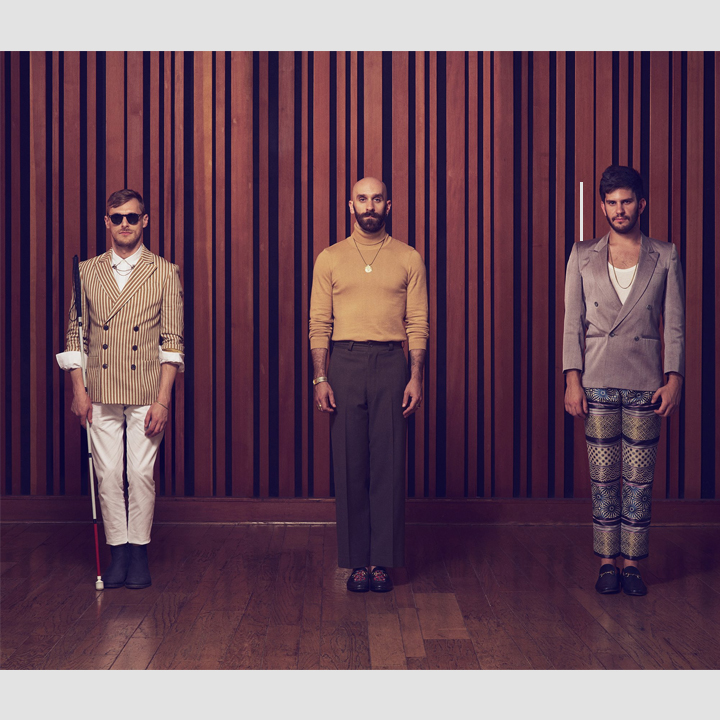 X Ambassadors’ debut album VHS reflects on the events that shaped lead vocalist and lyricist Sam Harris and his older brother, keyboardist Casey Harris’ life growing up in Ithaca, NY. “It was us looking back on everything that made us who we are,” says Sam. The gold-certified album, which Rolling Stone called “bombastic rock that’s as stomping as it is diaristic, leavened by big-tent pop hooks and a hint of hip-hop swagger,” debuted at No. 7 on Billboard’s Top 200 chart and spawned the double platinum-selling “Renegades,” which spent 12 consecutive weeks at No. 1 on the Alternative chart, and the double-platinum “Unsteady,” which went Top 10 at Alternative, Hot AC, and Top 40 radio. The success of VHS sent X Ambassadors on a nearly two-year touring odyssey that found them winning over fans around the world and performing at the Lollapalooza, Bonnaroo, Life is Beautiful, and Shaky Knees festivals, among others, and establishing themselves as a world-class rock band.

Their rise has been studded by an impressive list of accomplishments. The band, which also includes Sam’s college friend, Los Angeles-raised drummer Adam Levin, were nominated for an iHeartRadio Music Award, two Teen Choice awards, two Billboard Music awards, and an American Music award. They guested on tracks by Eminem, The Knocks, Zedd, Skylar Grey, Lil Wayne, Wiz Khalifa, and their KIDinaKORNER labelmates Imagine Dragons (“Sucker for Pain”). “Collider,” a song they wrote with Rage Against The Machine’s Tom Morello, was chosen as the soundtrack to ESPN’s season-long college football marketing campaign. Sam co-wrote a song for Rihanna called “American Oxygen,” produced by Alex da Kid and Kanye West. And finally, at last year’s SXSW, Sam and Casey sat in with The Roots, performing two X Ambassadors songs and a cover of Sam Cooke’s “Bring It On Home To Me.” “That was a dream come true for me,” Sam says. X Ambassadors returned the favor by inviting The Roots to co-headline the band’s inaugural Cayuga Sound Festival, which took place in Ithaca in the fall of 2017. “We wanted to give back to the community that raised us,” Sam says of the festival, which was curated by the band, and featured K.Flay, The Knocks, and Tei Shi on the bill. Proceeds were donated to the city’s Community School of Music and Arts, where Sam took music and dance lessons as a kid, along with other local programs and organizations.

Ithaca looms large in the story of X Ambassadors. Not only did it serve as major thematic inspiration on VHS, but Sam cites returning to their hometown to headline a sold-out fundraiser for the city’s State Theatre in May 2016 as one of his highlights of the last two years. “My teachers and mentors were there, my mom was there,” he recalls. “She came up on stage and sang ‘Georgia on My Mind’ with me while Casey accompanied us. It was really incredible. Everything kind of came full circle in that moment.”

X Ambassadors’ rise, however, has not been without its sacrifices. But from the challenges sprang the best music the band has ever recorded, including “Joyful” — which will appear on the band’s second album due from KIDinaKORNER/Interscope later this year. The piano-driven, gospel-inflected song is a full-throated hymn to gratitude that finds Sam spine-tinglingly pushing the boundaries of his already soulful vocal delivery. “‘Joyful’ is probably my favorite thing I've ever written, and our favorite thing that we've ever created as a band,” Sam says. “It came at a moment that was very raw and vulnerable for us. We were just on the precipice of the presidential election and the world felt like it was turning upside down, and my life felt like it was turning upside down. This song just came together within a day or two. It was a very emotional year and I had to learn how to really appreciate what I have and be in the moment. This song speaks very directly to that idea.”

Sam also drew inspiration from watching how his brother, who has been blind since childhood, handles things. “Casey has always been a very inspiring person for me through all of the troubles we've had and through everything he's been through himself,” Sam says. “He has the ability to just be grateful for everything he has in his life. I’ve never seen anything like it.”

“Joyful,” Sam says, became the thematic touchstone for X Ambassadors’ new record. “That was our starting point. We wrote that and thought, ‘Okay, this is something new. This feels genuine to us and to who we are.’ It’s got soul, it’s got heart, and it has that classic feel to it. It’s really an homage to some of the artists we grew up loving, like Ray Charles, Joe Cocker, Otis Redding, and The Band. Once ‘Joyful’ was done, we were like, ‘Let’s do it. Let’s go all the way.’”

The band has been pushing itself to infuse every new song with a soulful feeling. “These are influences we’ve had forever but I think I held back a lot on the last record,” he says. “I was so focused on coming up with something that would really open doors for us that I forgot to use my voice to its fullest extent.” Not any longer. The album’s first single, “Ahead of Myself,” is an impassioned, fervid song inspired by Sam’s tendency to jump into things before thinking them through. “That’s the story on paper, but in reality, it tells a much bigger story,” he says.

X Ambassadors’ fans got a taste of the band’s current sonic direction with three songs released in 2017, the rollicking “The Devil You Know” (which was featured in a trailer for the upcoming Tom Cruise film American Made), the slow-burning “Torches” (which was heard in the film Transformers: The Last Knight), and the inspirational “Hoping,” which was written in the days after the presidential election. For six months, all proceeds from “Hoping” went to benefit the American Civil Liberties Union (ACLU), which is fighting Donald Trump’s immigration ban, among other things. X Ambassadors also performed at a benefit concert to support Planned Parenthood on the eve of International Women’s Day at the Roxy in Los Angeles in March of 201.

“I believe that life and politics are inseparable,” Sam says. “And this is a time when a lot of people are feeling very scared, so to show a bit of solidarity can't hurt. And we really, truly believe in human rights and equal rights for everyone.”