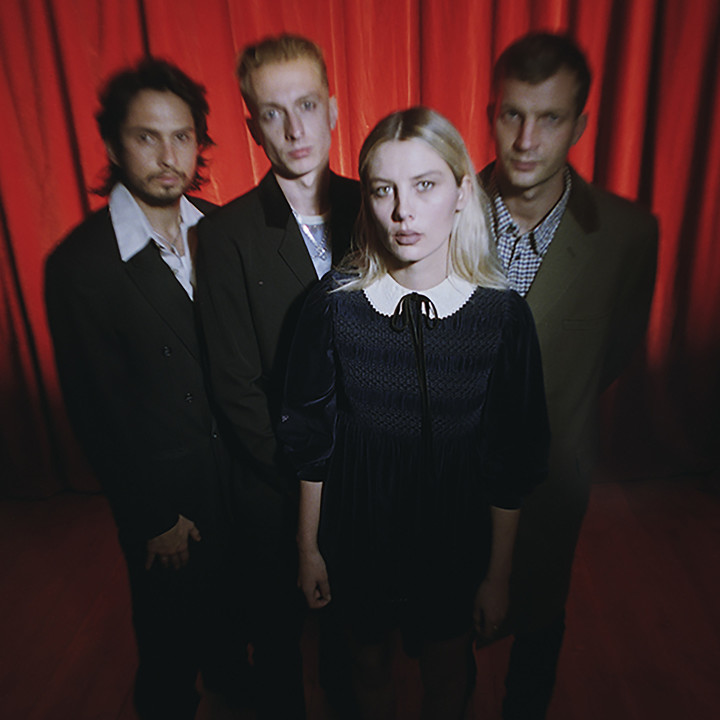 Wolf Alice are Ellie Rowsell (vocals, guitar), Joff Oddie (guitar, vocals), Joel Amey (drums) and Theo Ellis (bass). Since forming, the band have seen their 2015 gold-selling debut album My Love Is Cool soar to #2 on the UK charts, their sophomore album Visions Of A Life win the 2018 Hyundai Mercury Prize, and have picked up a GRAMMY nomination for Best Rock Performance. For their Visions Of A Life world tour, the band played a massive 187 shows -- including a sold out Alexandra Palace, London and 2 sold out dates at Brixton Academy London. The band have graced the stage at various worldwide festivals including the Pyramid Stage at Glastonbury. 2021 sees the band return with their third album 'Blue Weekend' to be released on 4th June.

Many like minds answered the call. Since Wolf Alice's debut album My Love Is Cool was released back in 2015, they received a Grammy nomination for Best Rock Performance for their Top 10 Alternative single "Moaning Lisa Smile," were named one of Rolling Stone's 10 New Artists You Need To Know, had several headline tours and performed at major festivals including Coachella and Lollapalooza. That is on top of all of their achievements in their home base of the UK, which include a debut at No. 2 in the UK charts, nominations for the prestigious Mercury Prize and a Brit Award, winning the NME Award for Best Live Band and a campaign that culminated in a Gold certified album. Add to that the mother of all global tours, which saw them crisscross the UK, the US, Australia, Japan and Europe, their song "Silk" appearing on the Trainspotting sequel T2, and being selected to be the musical heart of 24 Hour Party People director Michael Winterbottom's fictionalized documentary On The Road that premiered at the 2017 SXSW film festival, and that adds up to the sort of success that many young bands must wait years to achieve.

"The past two years were such amazing highs and then really extreme lows that you've never encountered before," says Ellie. "That's this album." It's such disorientating details, miniature epiphanies and tiny apocalypses from an extreme ride and the lull that came after, that make up Wolf Alice's second record, Visions Of A Life.

It's the classic story. You slog your ass off to make your debut, you tour like a demon, you hit the heights, you get no sleep. Then, when you finally come off the road, you come home to an empty house. "There's some extremely concentrated emotional fluctuation," says bassist Theo Ellis.

Instead of floundering or foundering, Wolf Alice channeled their restless energy into a forward motion. "On the first record maybe we were trying to hold back certain aspects, stylistic things," says guitarist Joff Oddie. "With this one, we thought 'we can do what we want.'"

Regrouping in London, they spent intense weeks in the rehearsal room, working out their experiences in a wealth of new material. When it came time to pick someone to help hone it down, a coincidental name popped up. Justin Meldal-Johnsen, who has played with the likes of Tori Amos, Nine Inch Nails and Beck, had also worked on Tegan and Sara's Heartthrob, M83's Hurry Up We're Dreaming, and Paramore's After Laughter. Ellie, however, recognized his name from the Raveonettes Pe'Ahi, the only album she'd ever looked up to see who produced it. The rest of the band remembered seeing him play with Beck at Electric Picnic. "We all watched that show and went 'That's one of the best shows we've ever seen, and that bassist is fucking mad and cool,'" says Theo. "And then somehow we ended up making a record with him, which is a nice bit of the world working its magic."

Visions Of A Life is packed with surprises for those who think they know what Wolf Alice's shtick is. A gauntlet is hurled by the exhilarating rage-rush "Yuk Foo," the first track released from the sophomore album. "You bore me, you bore me to death," screams Ellie. "Deplore me? No I don't give a shit." Who is the "you" being addressed -- or perhaps more appropriately, being dressed down -- though?

"We wanted to make it open to interpretation, so that anyone who was frustrated at something could have it as their anthem," says Ellie. She herself was inspired by "being sick and fed up of certain expectations... for me a lot of it is about being a young woman. Even the shit, everyday wolf-whistle thing. As I get older, I feel like 'Why have I always put up with that?' When I sing that kind of song, it's everything that I want to do when that happens."

It's a good time, of course, for anthems of anger. "I think almost everyone feels frustrated right now, don't they?" says Ellie. "And petrified as well," adds Theo. "I read the news this morning and I was physically scared."

The band themselves have been doing their bit to do something positive with that frustration and fear. Ellie and Theo set up the Bands For Refugees movement, after the horrors of Europe's migrant crisis and the lack of compassion shown in many quarters shocked them into action. In the run up to the UK election, the band used their social media to urge young people to make their voice heard. "It's just growing up and realizing the potential of what you can do with the platform you've been given," says Joff. "I think you have to do everything you can to stay hopeful," says Ellie. "Nothing gets better if you're hopeless."

Though political turmoil seeped into the emotional extremes of Visions Of A Life, it's fundamentally a personal album, and one of great growth for Wolf Alice.

Helping them through these emotional and sonic leaps was Meldal-Johnsen. Recording at engineer Carlos De La Garza's Music Friends studio in Eagle Rock, California, he created a safe, collaborative environment for them to grow, but also pushed them further. "He can play and hear notes you don't even know exist," says drummer Joel Amey. "He's working at such a high level that you just wanna try and be on the same level."

You can hear the results in the swaggering monster-folk-rock of "Sadboy," offering a buck-up to miseryguts everywhere and of all genders. And their progression and maturity as songwriters is particularly obvious in the beautifully paced, sweet and slow-burning of the single "Don't Delete The Kisses," a dizzyingly romantic track that tells of the delicious agony of unspoken love between friends over softly twinkling guitar and a steady rhythm. It's a sentimental love song for people who didn't do sentimental love songs until they fell sentimentally, ridiculously in love. "How awful is that, I'm like a teenage girl!" Ellie sings. "I might as well write all over my notebook that you 'rock my world.'

Intense emotion of a quite different kind pervades "Heavenward," written about the death of a friend. It's one of the biggest songs Wolf Alice have ever done, a cloudburst of shoegazey guitar and vaulting vocals (Ellie's voice here is a much stronger, expressive thing than ever). "I'm gonna celebrate you forever," Ellie promises. "You taught us things we all should learn."

Listeners will be surprised, meanwhile, by "Beautifully Unconventional," a muscularly grooved beast of a track that's a sister in spirit, if not sound, to Bikini Kill's "Rebel Girl." It cements Ellie's reputation as the foremost smasher of whatever pop's equivalent of the Bechdel test is, following up her ode to young female friendship on "Bros." "I wrote it about one of my friends," she says. "My feelings towards her reminded me of the film Heathers, where everyone is a Heather and you find your other non-Heather... a 'you can be my partner in crime,' sorta thing."

You might have noticed the word "friend" comes up a lot in relation to Wolf Alice. More than anything, that's what these feral children are and what they celebrate. The intensity of success -- something that breaks or at least tests many young bands -- brought them only closer together.

"It's a weird thing," says Theo. "I hope I'm not jinxing it by saying this but we really do spend a lot of time together... we know each other so well, intricately well, more than you would have in marriage. It's so close that it almost takes on a new state rather than like a relationship or like a friendship. Maybe it's not very necessarily healthy..."

If it sounds this good, how can it be wrong? Here's to Wolf Alice, a reason for downhearted feral children to keep faith with the future.

Visions Of A Life is out on September 29 via Dirty Hit / RCA.