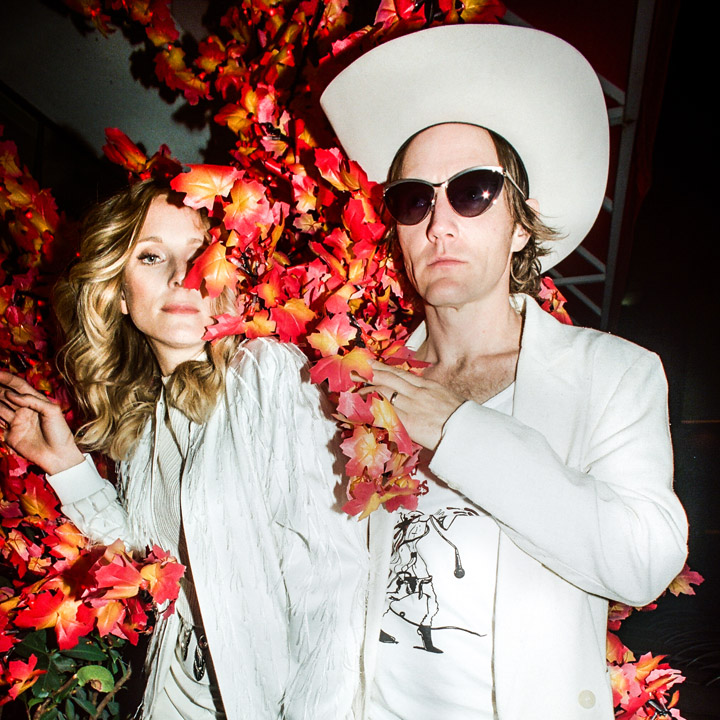 Glam and sleaze, desert grit and subway rats, scum-bags and fakers, hot messes and cold shoulders: welcome to the world of Whitehorse, a rock duo from Toronto.

Whitehorse began as something of a folk duo, but quickly outgrew that box with their inventive instrumentation and resistance to expectation. The duo moved into 'space cowboy' twang territory on the debut apocalyptic full-length The Fate of the World Depends on This Kiss, a fitting title lifted from a Wonder Woman comic. From there, Whitehorse expanded the intergalactic atmospherics with Leave No Bridge Unburned, a chase-scene-velocity acceleration into rock n' roll, with lethal riffs and near indecent vocal heat. Most recently, the duo rebuilt early electric blues for The Northern South Vol. 1, which showcased the duo's adventurousness and enviable guitar collection.

The duo's profile has grown exponentially with each release. The pair now sells out Massey Hall, Canada's most prestigious venue. Last year, Whitehorse won a Juno Award and performed on the award's live television broadcast to millions. Press highlights in the USA, include airtime on NPR's Morning Edition and Weekend Edition, and coverage from Rolling Stone, the Wall Street Journal, Paste and more.

With the new single "Boys Like You," Whitehorse once again mixes things up, adding hip-hop producers and processed beats, and expanding their studio sound with samplers, vintage drum-machines and more. The result is a song that is an irresistible fusion of 90s guitar rock riffs and Brit pop-inspired swells with futuristic, cinematic production.