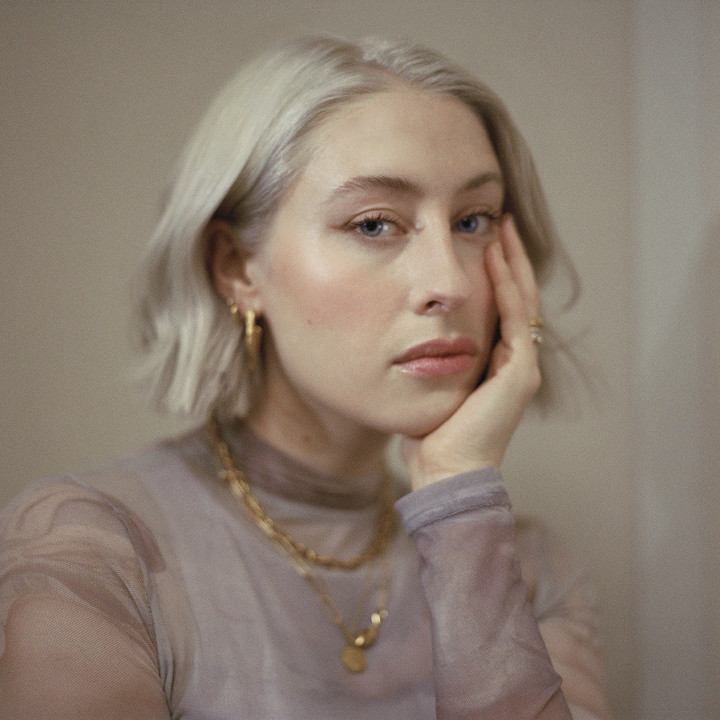 If I Saw You Again, Violet Skies' seductive debut album, arrives as the stars align for the Chepstowborn-and-raised singer, songwriter and producer. With more than 20 million streams of her past two EPs, riding high on hits co-written for Diana Ross, LEON, Mabel and Tiesto and on the back of a breakout duet with Billy Lockett from this year's Love Island, the musician is on the brink of becoming a household name.

Completed while locked down in L.A. last year, If I Saw You Again is proof that, in pop as in life, timing is everything. Ten sparse, searingly-honest, sensationally-sung tales of love and loss involve paths crossing and meetings missed, mix actual events and imaginary scenarios and capture Violet Skies on the rise after a rollercoaster ride during which she came close to quitting music.

"I'm a real believer in fate," says Violet, currently splitting her time between L.A. and the UK. "I couldn't have made this album at any other time. There's a definite sense of destiny to it."

The death of her beloved Nan in 2018, the fallout from a bad break-up and a new relationship are at the heart of bold, bewitching, melody-led songs set to piano and guitar and purposely uncluttered by production. The oldest tracks date back to 2017, the most recent were written last summer.

"I love production, but I wanted to give these songs space to breathe," says Violet, whose mesmerising vocals switch between high and haunting and low and hypnotic. "Sometimes less means more. Up close, you hear every word.

"In lockdown, I learnt to play guitar. I sat with the demos of songs I've collected over the past few years and thought a lot about how I wanted them to sound -- warm and comforting, completely real. There's electronic stuff, synths and weird moments as well, but this is the most bare my music has ever been."

Violet Skies' first taste of fame came unexpectedly in 2013 when her DIY debut single, "How The Mighty," exploded on Soundcloud. Jamie Cullum and Huw Stephens helped it take off at radio and within six months, a hyped Violet was on stage at Glastonbury and playing everywhere from SXSW and Eurosonic to gigs in Germany and China. But what should have been fun soon turned sour.

A run of bad luck, bad managers and a break-up sent her home to Wales in 2016 unsure of her future. For her writing, however, it proved a turning point.

"Something clicked in my brain," she says. "Suddenly I didn't care what anyone thought and I started to write honest songs. I lost the shame about what had happened to me and it changed my life almost overnight."

Invited to writing camps from the US to Sweden, Violet Skies became an in-demand songwriter. At one, she met the producer Charlie McClean (1D, Little Mix, Leona Lewis) and, with aid of a grant from PRS, the pair launched sheWrites, pioneering, female-only writing camps which have since taken off around the world and led to the pair's co-writing Diana Ross's current single "I Still Believe."

Meanwhile, her own songs found her a new manager and a deal with Kobalt. In 2019, she released the acclaimed EP I'll Buy A House, a kiss-off to the ex who had cheated on her, and by autumn had her first chart hit with Mabel & Tiesto's "God Is A Dancer."

The pandemic proved productive. In L.A. to write for other artists, Violet Skies found herself stuck and decided the time was right to record her debut album. Last spring's EP Lonely, featuring a song co-written with longtime friend Finneas and a title track later re-recorded as a duet with the Swedish star Molly Hammar, hinted at her pared-back new direction. But it was learning to play guitar which proved key to If I Saw You Again's stark, yet intimate sound.

"There is a lot of guitar on the album, learning to play in lockdown was a revelation. It opened the door to simplifying the songs. I went back to the tracks I'd held back, which I knew were special but hadn't released, and reworked them."

"My life has changed since I wrote some of them. Plus, my voice has improved. Singing them now, they feel different, as though I'm coming from a different perspective, yet none has lost any meaning. If anything, they mean more to me now."

If I Saw You Again takes its title from remembering her grandmother, at whose home in Pontypridd she hid when her life was falling apart, "It also refers to my relationships, past and present."

"If I saw her again, what would we discuss?" asks Violet. "I ask a lot of questions on the album. I muse a lot about loss and death. Essentially, it's a collection of songs about people I've lost and found, about meetings or lack of meetings. Who decides when people's paths cross?"

Meeting her now boyfriend, producer Micah Jasper (who contributes to the album) in the US in 2017, set the ball rolling on several songs, among them the spectral spine chiller Jupiter, the breezy beauty "When Are We Gonna Do This" and the misleadingly titled, sunny singalong "What If One Of Us Died."

"I knew Micah a week before I had to head home and for the next two years we were in a long distance relationship," she says. "'Jupiter' is about Venus and Jupiter meeting once every seven years. 'When Are We Gonna Do This' is me asking when the relationship will become real, which we both knew was inevitable. 'What If One Of Us Died' proves my perhaps a little morbid fascination with death."

The album opens with the sensual, part acapella "Settle," written when Notre Dame was on fire and California was under snow.

"I was in LA, watching the news and it felt like the world was ending," says Violet. "I sat on 'Settle' because I knew it would open the album. It's a warning not to settle for the state of how things are -- whether in your own life or the world at large -- just because it's too much effort to change. It's about urgency and time."

The acoustic guitar-led "We Don't Get Along" is about falling out of love, while "The Internet" finds her happy for her ex as she looks him up online.

"When I first wrote about him I wanted revenge," she says. "But now I want to thank him, I hope he's ok. If he hadn't cheated on me, I wouldn't be where I am now."

Three tracks were written remotely in lockdowns last year. "Never Be Cool" captures her inner nerd, the swotty, choir girl at school who will always be with her. The ballad "Love You Better" is about refusing to change to stop a partner from straying. "Hey God, It's Me," written in her PJs on the sofa with her newly purchased acoustic guitar, questions the meaning of death and features a sample of her, her Mam and her late Nan laughing, which she found by chance in her voice notes.

The album closes with "Over The Valley," a gorgeous, gripping tale told from her grandmother's perspective which starts with the sound of thunder.

"Whenever there were storms, my Nan would open her front door and sit on the step and we'd watch the weather together," says Violet. "I cried my eyes out when I wrote that song, the nutcase Brit in L.A. with a couple of co-writers I'd never met before. Even now when there's a storm, I hear my nan speaking to me."

As both a writer and an artist Violet Skies is soaring. A finalist at Max Martin's Denniz Pop Awards last year and with sheWrites now a publishing company, with camps taking place around the globe, she has to pinch herself that the teen who started out playing pubs in Chepstow and came close to giving up, finally has the debut album she dreamed of.