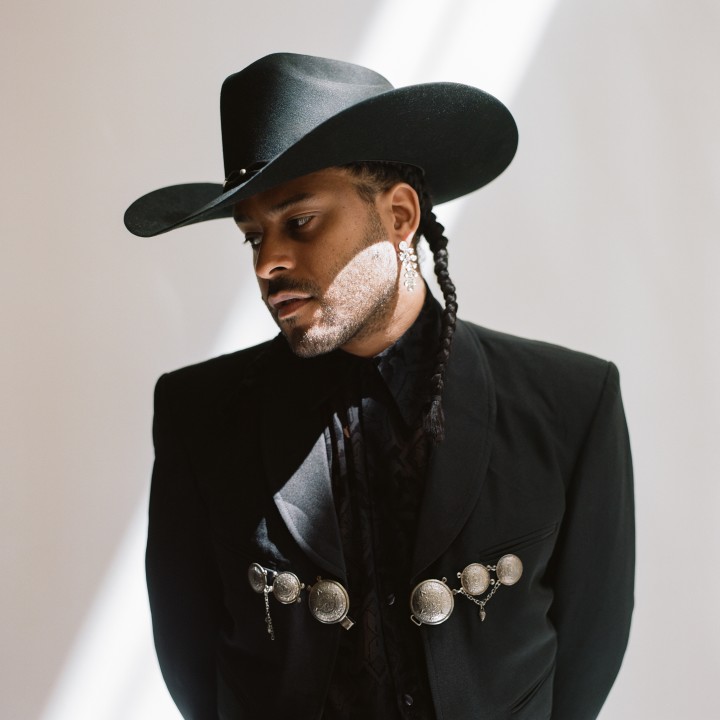 On “Runaway,” the final song on Twin Shadow’s upcoming fourth album, Caer, George Lewis Jr. sings: “I knew the crash was comin’, I felt it in my blood.” “Sometimes I feel like I have to take a fall to essentially get to the next phase of my life,” Lewis says about the lyric. “It's happened over and over. I've been through so many musical phases and through so many relationships with friends and lovers. I always feel like I'm standing on the edge of a cliff, looking down and thinking, ‘This is the only way forward: onto the next thing.’ It’s sort of destructive, but I guess I thrive on rebirth.”

Falling is a theme that surfaces throughout the album, which is why Lewis called it Caer -- the Spanish word for “to fall.” The album serves as a powerful lens through which Lewis explores his own personal sense of falling, as well what he has observed about a world that feels as if its declining. On a larger scale, Caer feels extraordinarily current, given what’s going on culturally and politically right now. “The patriarchy is falling apart,” Lewis says. “Our perceptions of who we are as human beings, because of technology and machines, are falling apart. We’re living at a breaking point, and a lot of the themes on the album are talking about these fault lines.” Lewis refers to such fissures on “Saturdays” (which features Haim). “It’s a love song,” he says. “’Saturdays’ is the heaven place you go to when you're in love or even with friends, feeling your youth. But it’s also about my feeling that the world is starting to tear itself apart and maybe we’re falling through the cracks. But when you’re laying in bed next to someone you care about, none of that seems real.”

It’s not entirely surprising that Lewis wrote an album about falling and trying to get back up, given that Caer is the first Twin Shadow album to be released after Lewis emerged from a challenging two years that were characterized by a struggle with depression and a catastrophic bus crash involving himself and 12 of his band members and crew, which affected and eventually led to the end of a two-year romantic relationship. The turbulence began while Lewis was on tour supporting his 2015 album Eclipse. “My year was all planned out,” he says. “I was supposed to tour the U.S. and Europe and it all went up in smoke. At the same time, I had this beautiful person come into my life on that tour, but I was in denial, after the accident, of the amount of physical and emotional pain I was in and the relationship definitely suffered as a result.” Having sustained an injury that could have left his hand unusable, Lewis was fortunate enough to undergo successful reconstructive surgery.

To heal, Lewis holed up in a house on the beach in the Venice neighborhood of Los Angeles with his then-girlfriend. He rented a studio in Malibu and tried to write, but he could feel that another crash was coming, this time a romantic one. He wrote the song “Little Woman” about his impending break-up. “I started to wonder about being male as a destructive force,” he says of the song. “Is it inherent? Why, in the face of someone who cared so much about me, who took care of me, and who appreciated me, was I considering running away? But ultimately the song becomes a song of praise for women and I realize how blessed I am to have experienced love with this person.”

Lewis eventually set up a studio in a tiny guest house he rented in Echo Park and considered the events of the past two years, including the idea that falling in love in 2017 was a radical act of bravery. “Does anybody have the guts to truly fall in love in a real way these days?” Lewis asks. “Do I? We are so distracted and have so many options available to us that it paralyzes us. So this idea of falling in love feels courageous.” In the song “Brace,” Lewis sings about “Tom Petty waiting on a free fall / Sometimes we brace / And then we fall…” “That song was a breakthrough for me after dealing with the repercussions of my breakup,” he says. “It’s kind of a thank you to someone I met who positively inspired me. I don't think of this record as a breakup record. I think of it as a ‘me-getting-myself-back-together’ record.”

To that end, Lewis wants the new songs to create a warm feeling in the listener. “I want people to be comforted by them, that the music might open up a new way of being emotionally, like a warm bed that someone can get into,” he says. “I want there to be that flash of recognition, like, ‘Yeah, I know what Saturdays feel like. I know what bracing and falling is. I know what it's like to hold back and then to let go. I know what it's like to blow up a relationship because you don't know what else to do.’”

Lewis feels that Caer is something of a sister record to his 2010 debut album, the lush, gauzy Forget, in that it’s a record that grows with you. More is revealed the more time you spend with it. Lewis is part of a lineage of artists who constantly evolve, but still manage to create the soundtrack to people’s lives, like Prince and David Bowie. “Those are the artists who just keep giving it to you forever. It's ‘forever’ music. To me, that's the greatest thing in the world.”