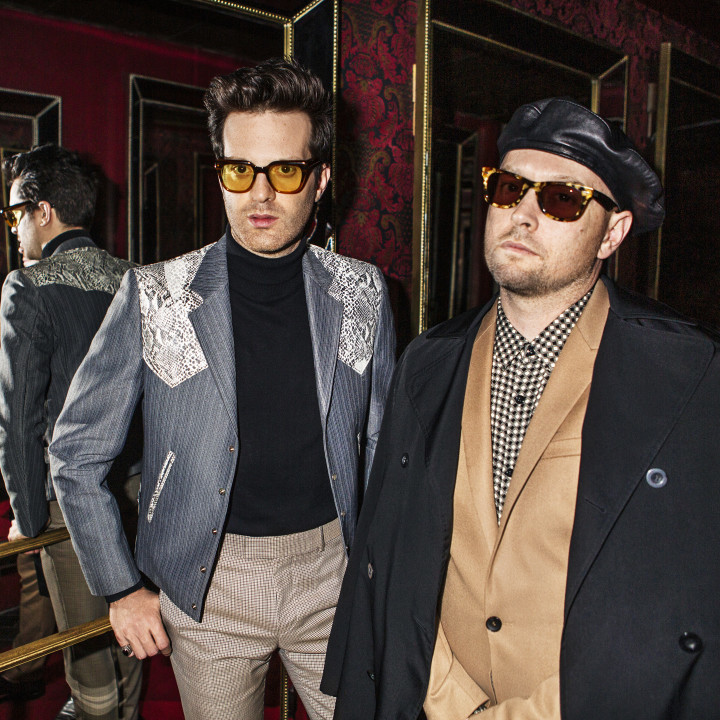 "The only time you wear a Tuxedo is when it's time to party."

So said legendary West Coast player Snoop Dogg on the opening track of Tuxedo II. The blessing of the Doggfather was of special importance to Mayer Hawthorne and Jake One, whose second album found them at forefront of the new wave of gangster boogie - one that owes as much to G-funk as Pfunk. This is the territory of pre- and post-hydraulic low riders: a mélange of Cali boom-bap, analog synth bass and elegant funk that resonates truth and authenticity in an era where so many are faking it.

Bonding over a shared love of Chic, Parliament and the other signs in the greater funk Zodiac, Mayer Hawthorne (Aquarius) and Jake One (Taurus) were early predictors of the sea changes that American music would undergo in 2016. Their first release in March of 2015 debuted at #1 on iTunes America's RnB charts, christened as “Dance floor catnip” by the Boston Globe, and “Pure disco-funk hot fire” by Okayplayer. The sophomore album on Stones Throw Records was premiered with a special performance on Jimmy Kimmel Live and dubbed as “Straight-up funk magic” by Noisey. Considering their individual successes (Mayer's four solo albums, Jake's production work for the likes of Drake, Future, The Weeknd and De La Soul) and eight GRAMMY nominations between the two of them, it's no surprise that their powers combined have yet again yielded an absolute slapper, perfect for dance parties in 2019 and beyond. Tuxedo’s body of work, while wholly original, is an exercise in honoring its forebears, recalling the futurefunk wobble of Zapp, Gap, Jam/Lewis and Junie Morrison, while nodding lyrically to Mtume, Jodeci and Cameo. The crystallization of the song’s concept comes courtesy of its message of universal love; thanks to the signature combination of soul and pop sensibility that have come to define Tuxedo's hooks.

"This is celebration music..." says Mayer in a recent interview with NPR, one of the many outlets to cover Tuxedo's rise – see NPR’s Tiny Desk. After all - the transcendental ritual of the party and the rippling self-affirmation of the funk are of one spirit: the spirit of self-love...of self-expression. Tuxedo’s music is a modern testament to unity and positivity in trying times. It is a reminder that the dance floor will always be there to welcome you, whoever you are.

Do you Fux with the Tux?