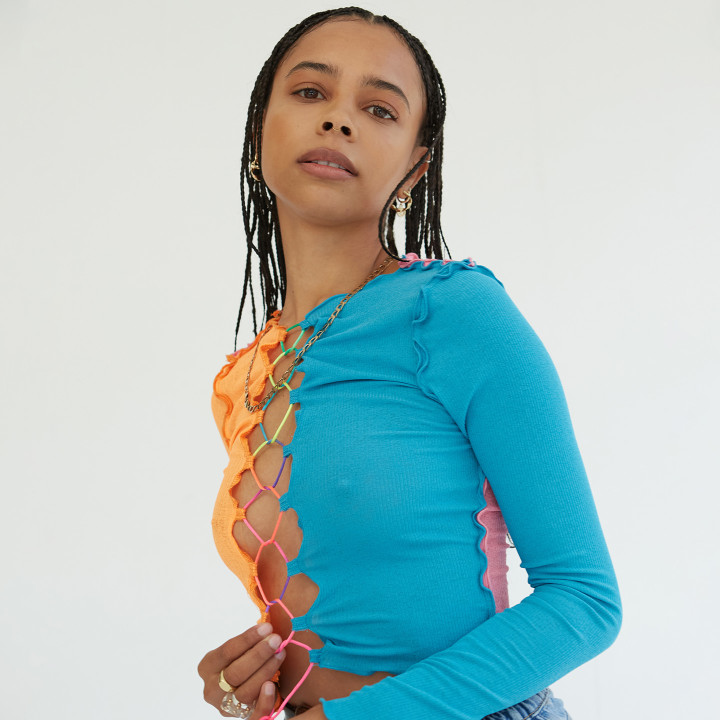 Named BBC Radio 1’s “Future Artist” for January 2021, “Star of 2020” by BBC Introducing and tipped as “one to watch” by NME, Mixmag and DJ Mag, TSHA is a London based artist who is rapidly emerging as one of the most exciting young talents coming out of the capital. Forthcoming EP “Only L’,’ produced entirely by TSHA and due for release in August, showcases a confident creative who is constantly developing and refining her own distinct feel and sound.

Entirely self-taught, TSHA released her debut EP “Dawn” in 2018, setting out her stall as an artist with an ear for warm, groove-laden basslines and bright, melodic hooks. Her follow- up single ‘Sacred,’ released in 2019, immediately caught the ear of Bonobo, who included it on his “fabric presents” compilation album. TSHA’s debut on Ninja Tune’s Counter Records imprint -- ’Moon’ -- was immediately hailed as one of Billboard’s ‘Best New Dance Tracks,’ while in the UK, Pete Tong named ‘Moon’ as his ‘Essential New Tune’ on BBC Radio 1. Most recent EP “Flowers,” her first on Ninja Tune, was without doubt her most ambitious and accomplished body of work so far, the EP featured collaborations with Gabrielle Aplin and Malian griot music group Trio Da Kali.

TSHA kicked off 2021 with her debut BBC Essential Mix as well providing Annie Mac with a Mini-Mix on BBC Radio 1. TSHA featured as the first ever ‘Future Artist’ at BBC Radio 1 and her interview with Jack Saunders on the station aired alongside plays of singles ‘Change’ and ‘Sister.’ ‘Change’ was first played by Annie Mac on her BBC Radio 1 show and was then moved onto the R1 Playlist as BBC Introducing ‘Track of the Week.’ Support for TSHA on the airwaves includes Pete Tong, Danny Howard, Jamz Supernova, Flava D, Huw Stephens on BBC Radio 1/1Xtra plus big support from Mistajam at Capital. TSHA has also hosted shows on Worldwide FM, Rinse FM (UK and France) and Reprezent. Towards the end of 2020, TSHA contributed a ‘Mix Up’ mix for Australian national radio station Triple J and a ‘Midnight In A Perfect World’ mix for US radio station KEXP. Prior to the release of “Flowers” EP, Bonobo previewed track ‘Demba (feat. Trio Da Kali)’ on his OUTLIER show on NTS radio.

Support across DSPs has already been immense for TSHA in such a short timespan, amassing over 31M+ streams across digital platforms. Singles ‘Sister’ and ‘Change’ have received fantastic Spotify coverage including New Music Fridays in over 15 territories including the US and UK, plus editorial playlists such as mint (5.5M), Chill Tracks (2.7M), Dance Rising (1.9M), POLLEN (1.3M), Massive Dance Hits (1.2M), Chillout Lounge (1M), Fresh Finds (714K), Friday Cratediggers (297K), Deephouse Delight (138K), TOP SHELF ELECTRONIC (111K) and many more. TSHA has graced the cover of UK House Music (671K) and Friday Cratediggers (305K) and Altar (250k) respectively and has previously provided a playlist takeover on Spotify’s All Night. A Spotify global mobile home banner supported the release of her “Moonlight” EP. TSHA currently curates her own Spotify playlist titled ‘Dusk Till Dawn’ which features an eclectic mix of artists including Jon Hopkins, Suzanne Kraft, Jacques Greene and Channel Tres.

Amazon Music made ‘Sister’ their Song of the Day on New Year’s Eve 2020. Furthermore TSHA was featured on an Amazon billboard placement in New York City to promote the New Years Eve 2020 playlist. Amazon Music UK hadv also previously featured TSHA in their annual “Ones to Watch list for 2020” alongside Celeste, Arlo Parks, Squid and Bbeabadoobee. In honor of Women’s History Month, YouTube created a number of genre playlists highlighting women of the biggest genres & put TSHA on the cover of their ‘Women Of Electronic’ playlist with ‘Sister’ as #1 track.

(CONFIDENTIAL) In the next few months, TSHA will be creating a multitude of mixes for shows like Mixmag’s Lab LDN (airing 18 June), Sirius XM Virtual Festival Memorial Day Weekend (airing 31 May), WNYL’s New Arrival’s show (which airs on 16 big Entercom properties like KROQ in LA, Alt 92.3 in NYC, etc), and Femme House w/LP Giobbi on Diplo’s SiriusXM Channel. The latter will also include an interview with TSHA.