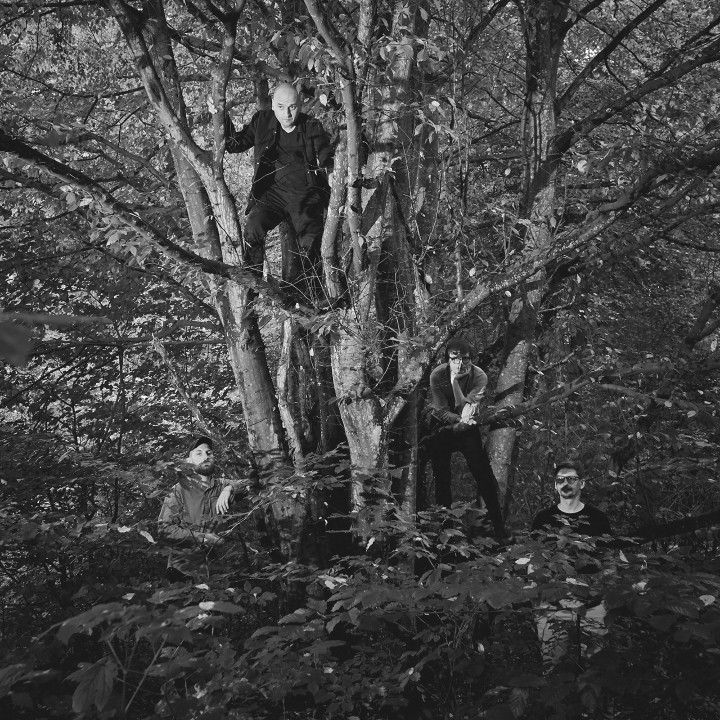 In the 1963 introduction to his dystopian novel, Bend Sinister, Vladimir Nabokov talks of how the book's plot -- one of subterfuge, betrayal, imprisonment and death -- "starts to breed in the bright broth of a rain puddle." This oblong pool, "shaped like a cell that is about to divide," reappears throughout the text as an ink blot then an ink stain, spilled milk, an image of ciliated thought, a footprint and the imprint of a human soul.

Nabokov's puddle could be the perfect metaphor for the music of Trupa Trupa. An entity that shapeshifts and documents different circumstances, but music that still reflects a single, inevitable truth. The band's make up is key here; Trupa Trupa consists of "four friends and captains" with different personalities: something that creates, in the words of singer Grzegorz Kwiatkowski, "troubles," which lead to "both a democracy and a polyphonic situation." We could also look to their formidable back catalogue and sift through a body of work that can often sound hard, or blunt; akin to the offhand and oblique stories of a backwoodsman. But this bluntness is carefully couched in abstractions or clever patterns, courtesy of suggestive phrases and the imposition of tonal or rhythmic moods. It is also set off against the most beautiful and uplifting pop music. A conundrum, of course, but then one doesn't look into Nabokovian puddles for 'likes.'

One element of the Gdansk band's music is always there, in plain sight. Trupa Trupa look to confront evil; exploring, in Kwiatkowski's words, "the wasteland of human nature where hatred and genocide are not just distant reverberations of Central European history but still resonate in contemporary reality." The band often does this openly and without compromise; even if the lyrics love to deal in metaphor or intrigue. And yet, and maybe strangely in a world increasingly addicted to proclaiming "its own truth" online, Trupa Trupa still revels in making truthful music that needs no instant affirmation. On this new release, for example, the crushing plod of 'Sick' is driven by the lines, "I don't know how to tell you that you're sick." Brilliantly evocative and double-dealing, it is a line that brings to mind both recent events and countryman Andrzej Żuławski's 1971 film, The Third Part of the Night, where the metaphor of sickness is graphically and symbolically used to describe a society dealing with the pressure of both a physical and mental occupation. Here, the processed noises sound like they mutate, or decay as they progress; a sonic petri dish that reminds us that sometimes we have no control over the way things pan out.

Inevitably, COVID hangs over everything like a broody rain cloud. Grzegorz Kwiatkowski talks of a "visible paranoia" in the studio during the recording of B FLAT A. "COVID also affected us. So our dark stuff was in my opinion even darker because of this super strange, frightening atmosphere all around us and inside of us." According to Kwiatkowski the record -- worked on when an American tour had to be canned at the last minute -- is a "kind of a study of disintegration and decomposition." Maybe the powerful track, 'Uselessness' documents this, where the sometimes overbearing arrangement drives home the core message. The music feels oppressive and threatening, almost physically forcing the listener into the position of those who feel useless in the face of such an assault.

Though still carrying the weight of unseen or unheard histories, whether ancient or modern, B FLAT A is the release where the provincial math rock, woozy psychedelia and heavy folk elements finally coalesce in that most unfashionable of things, a sound that can fill a stadium. The band has always been able to shake the roots of any mountain in terms of making a noise but their new record showcases a new, outward-looking sensibility that could moonlight as the kind of sludgy, primetime pop-rock music that Pink Floyd once ensnared half the world's youth with. Listen to the airy 'All and All' for example, with its gentle, organ bound melody. It could be a Beatles fly by, or a lost snippet from that period when Rick Wright took over song duties from Syd Barrett in the Floyd. In this regard it seems now that their last two releases, 2019's Of the Sun and 2017's Jolly New Songs were brilliant teases, "existential" records that played footsie with the listener, promising many brilliant things only to disappear into a mist with a wink and a nod. B FLAT A is a much more upfront affair, armed with a quiver full of sonic arrows such as potential world hit, 'Uniforms.' This track, with its Guided By Voices-style simplicity, boils down all the nefarious, quixotic, algorithmic thoughts about "belonging" to a terrifying statement, "I wanna be all my uniforms." The rumbling percussive pay off adds a certain irony as we stare at our own reflections, or more likely, bawl it out in affirmation whilst waving our lighters in the air. When asked whether the band would fancy revamping the formula that brought the world Live Aid, Kwiatkowski was blunt. "Not at all. Actually we really don't like this kind of art. And our heroes are bands like Fugazi, Sonic Youth or the Velvet Underground and a lot of other stuff such as Glenn Gould or Schubert. And anyway, sometimes our gigs look like real hell. Very often before gigs I ask sound engineers and the light people to literally destroy everything. We give them total freedom but with this one suggestion: let's make a very intensive rollercoaster situation."

B FLAT A also foregrounds one of Trupa Trupa's great strengths -- maybe an unfashionable one for these LCD times -- namely, their collective ability to make incredibly tactile, physical music. The band approaches this task in a number of ways; sometimes like that of a master craftsman carving an ornate chair. Or a welder repairing a tank that's been knocked up in a sortie. Regardless of the situation, nothing is left to chance, there is never the idea that the song and the texts have to undergo an awkward introduction after both have been created. Because of this B FLAT A is perhaps their most alert and "focused" record to date; it signals an intent and a placement of sound. Tracks like 'Far Away,' 'Kwietnik' and 'Twitch' are driven by tough, strident beats and growling guitar passages, inhabiting an interesting hinterland; one in view of the camp fires set up by Goth and post rock. The record even treads water into metal territory, running off with a Rush lick like a dog with a bone.

Never forget that this music can be a lot of fun, too. A love of opera and the power of Ohm have guided recent gigs. The band members also believe in "family friendship vibes" and "great, openhearted cooperation," a rarity in the music industry. Kwiatkowski: "Year by year our family is bigger and stronger. We met so many great people on our way and these relations are as important as art. And all of this creates some kind of ethical landscape, which is also very, very important for us and for our art." Cryptic, funny, possessing of a great moral force, Trupa Trupa is a band for these times, whether we are ready for them or not.