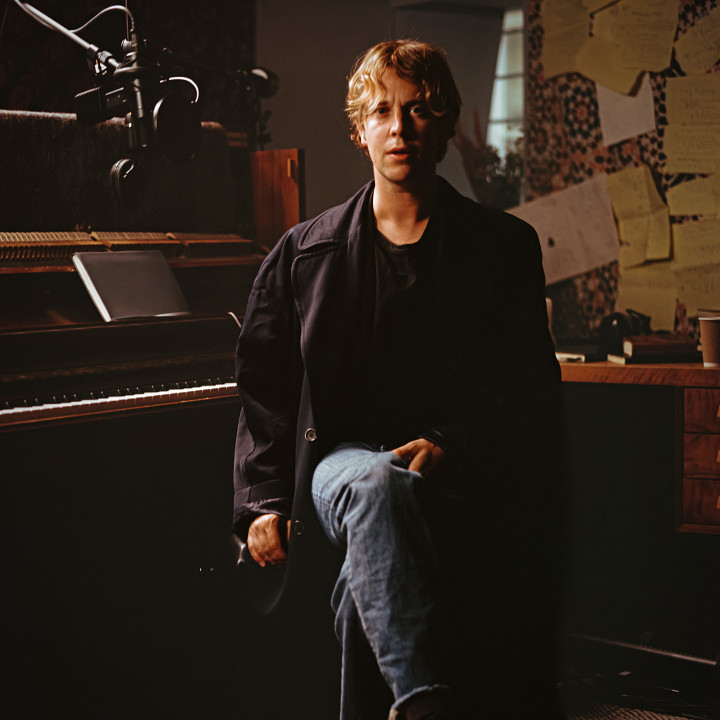 Away from all the noise of his various successes -- three UK top 5 albums including the platinum-selling, chart-topping Long Way Down; two top 10 singles; a 2013 Brit award for Critic's Choice -- there's one thing that's always kept Tom Odell grounded: songwriting. A classic songwriter in the mould of Elton John (a big fan, actually), Odell -- who was awarded a prestigious Ivor Novello for Songwriter of the Year in 2014 -- relied on his passion more than ever when it came to crafting his fourth album, the pop-leaning, emotionally-healing monsters (released July 9th). After a dark period of mental health stalked most of his 2018 and 19, Odell wrote his way through it, eventually letting down his guard and pouring his feelings on everything from anxiety to capitalism, toxic masculinity to politics, into a 16-track opus that feels like both a daring creative rebirth and a solidifying of Odell's strengths. It's all there in lead single, numb, which opens with Odell's unadorned vocal over sparse piano -- "I hold my hand over the flame, to see if I can feel some pain," he sings -- before eerie, wheezing electronics and layers of clipped beats cloak the song in a sticky sadness.

"I was writing songs like I always did but it wasn't until I started writing about stuff that was contributing to my mental health problems that I felt like a record was forming," he says of the album -- his first since 2018's 70s rock-leaning Jubilee Road -- which was started in May 2019 and finished in Odell's home studio between lockdowns in 2020. That thematic turning point came in the shape of the single monster, which grabs hold of numb's inky molasses and confronts it head on. With the sky-scraping chorus ("you're just a monster and I'm not scared") initially inspired by Trump, and more specifically climate change activist Great Thunberg's staring him down at the UN Climate Summit in 2019, the song soon morphed into something more abstract; a self-help mantra for Odell's ongoing battle with anxiety. "It's about trying to tell myself that this thing I'm feeling is not real," he says. "It always used to happen in bathrooms -- I'd be out somewhere and then I'd walk to the bathroom and my heart would go at a million miles per hour and I'd feel like I was about to collapse, and I'd try to tell myself it was fine. That it will pass. That it's a state of mind."

Odell has been working as a musician in the public eye since he was 21 when self-penned debut album Long Way Down earned him a number 1 album, a top 10 single (the epic Another Love) and a Brit. Now, 30, it's clear to Odell that the whirlwind around his debut kickstarted a work ethic that eventually became an obsession. "Just wanting to completely lose myself in it but to a damaging extent I think." It reached an apex in September 2019 when Odell, fresh off touring Jubilee Road, went straight to LA to start writing the next album. "Then this chronic anxiety that I'd had for a couple of years just got worse -- I was very lonely, I was drinking way too much, and it just got really bad." He takes a deep breath. "I was taking Valium everyday to try and just not have a panic attack. I was seeing multiple psychologists over there." Plans were made to fly to Nashville to work with producer Mike Elizondo (Fiona Apple, Twenty One Pilots) but were swiftly cancelled after Odell woke up one morning "and I couldn't do anymore music." He knew something had to change. "It was like I'm going to end up with something terrible happening," he sighs. "I used to sit on Santa Monica beach and look at the planes taking off from LAX and just dream of being on one." In the end he flew back home, went straight to his parent's house and slowly got better. "That was the point I started writing these songs."

Slowly but surely, Odell alchemised that experience into music. He also realised his broader lyrical horizons needed to be matched by a musical expansion, with a lot of the songs on monsters -- created alongside songwriter Laurie Blundell and producer Miles James -- leaning into a more electronic, bedroom pop sound that Odell has steadily become obsessed with over the last few years. It wasn't always that way, mind you. "I really turned my nose up at anything that was made on a computer," he laughs. "I just didn't like pop music. Some of that was my issue and some of it was that pop music wasn't that good four or five years ago -- it's so interesting now. I hear lyrical subjects that I don't think anyone's heard in pop music before. I felt like I was getting caught up in that fire and suddenly I was so excited." This new found love of DIY electronic pop chimed with the pandemic's arrival and songs were crafted in a more threadbare way around instruments he had at hand, like Moog synths. It was a move underpinned by both necessity and a desire to explore. "It was the inhibition of not being able to use a full band that pushed things forward," he says. So eerie synths and head-rattling beats augment the frayed-around-the-edges, impassioned rallying cry of fighting fire with fire ("I'm sick of white messiahs"), while money -- which rails against society's obsession with capitalism, while also pointing at the reflection in the mirror -- is built around a driving pulse of echo-laden beats and crunchy, metallic percussion. On numb, which was inspired by experimental musician Mica Levi's soundscapes, synthetic textures are painstakingly fused with acoustic flourishes. "I would say there was this period before it all unravelled in LA where I was just disconnected," he says of numb's lyrical inspiration. "I felt bogged down, like I was beginning to lose that sense of lightness."

fighting fire with fire , numb and monster also touch on ideas around prevailing toxic masculinity and its effects on body-image issues. "In monster, I like the idea that I'm singing the chorus to myself -- this idea of body image and never being good enough. You look in the mirror and it's like 'you're just a monster.' Those low self-esteem moments that we all have." That theme also permeates the fragile, heart-breaking piano ballad and future single, lose you again, which pores over a fractured relationship and rails at the stoicism that bleeds out of men being afraid to show their feelings. While the album's topics are often heavy, there's a lightness of touch that means Odell is able to pull off pop's greatest trick; hiding sadness in bright, joyful melodies. It's there on the buoyant pop shimmer of me and my friends, inspired by a homeless person Odell met briefly in LA who called him out on his patronising need to help her, and the pastoral, 60s-inspired guitar figure that flutters around the broken tales of the lush tears that never dry.

As a testament to his enduring popularity, Tom Odell was invited to perform on BBC1 Graham Norton TV show (watch here)...whilst more recently he appeared on the James Corden Late Late Show (watch here) with another intimate performance. At the same time Odell's fan base continues to grow exponentially with his new sound and direction. He has gained over 4 million new monthly listeners since the start of the year, with ⅔ of his audience under 25. Despite joining TikTok relatively recently, his heavily engaged videos have been viewed over 15 million times and his first ever single Another Love has had a resurgence in popularity amongst a new generation, becoming a viral hit and entering the UK official singles charts again!

Four albums into his career and Tom Odell has made a record that feels free of expectation. Free of other people's perceptions of who he is as an artist. While it was darkness that inspired him he's managed to transform that into a multi-layered, genre-bending pop album full of light, and hope, even in the strangest of times. monsters also represents the start of chapter two in Odell's ongoing musical journey. "I feel like I'll be doing this for as long as I can," Odell smiles. "I also feel like I do it for the right reasons -- because I love making music." He's confident, too, after a difficult few years lost in the wilderness. "I feel like I've got shit to say and I'm good at what I'm doing now."