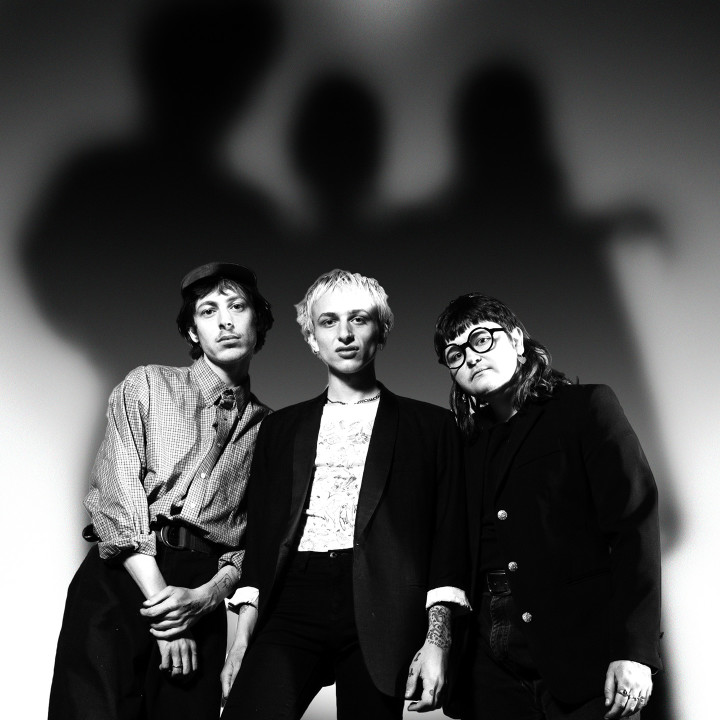 Bound by circumstance, identity, and creative spirit, three trans multi-instrumentalists founded THUS LOVE in 2018 in Brattleboro, Vermont. But the shared experience of Echo Marshall (she/her), Lu Racine (he/him), and Nathaniel van Osdol (they/them) runs much deeper, tracing its roots to poor, rural towns where it was difficult to find communities to call their own. That feeling of loss and solitary longing lies at the heart of their debut album, Memorial, and has also, paradoxically, cemented their powerfully close connection in THUS LOVE. The band lived together in a one-bedroom apartment above downtown Brattleboro during the entire recording process, with Marshall cordoning off a room to build a studio from scratch. "I had always been intrigued by the technicalities of recording," explains Marshall. "But I never really had the motivation to learn until this project came into existence. We all realized pretty quickly that the only way to get the results we wanted -- an album that affirmed who we genuinely are and our friendship -- was to record it in our home."

Reflecting the intimacy of its creation, Memorial is a highly personal document, exploring alienation from society, from one's own body, and the agonizing grief of letting go. Musically, the band combines their love of post-punk with a loose, eclectic experimental streak that owes as much to van Osdol's jazz collection as it does to Marshall's classical training as a cellist. The result is an album that breathes new life into a notoriously cold and often distant musical genre, imbuing it with a startling sincerity and vulnerability. The unflinching, emotive directness of THUS LOVE's music serves as both a cathartic release as well as a fitting backdrop for Marshall's anxious tales of lives lived on the margins -- those who spend weeks at a time without a place to call home or who are forced to deal with a society that in many ways still refuses to acknowledge something as basic as one's identity. Marshall, Racine and van Osdol have experienced it all on a very personal level, and also see it as their obligation to amplify the voices of those who continue to struggle. Says Marshall: "What I hope we're able to accomplish with THUS LOVE is to redirect opportunities to those who haven't had them and to create communities in the kinds of places where we grew up. We want them to know they're not alone."