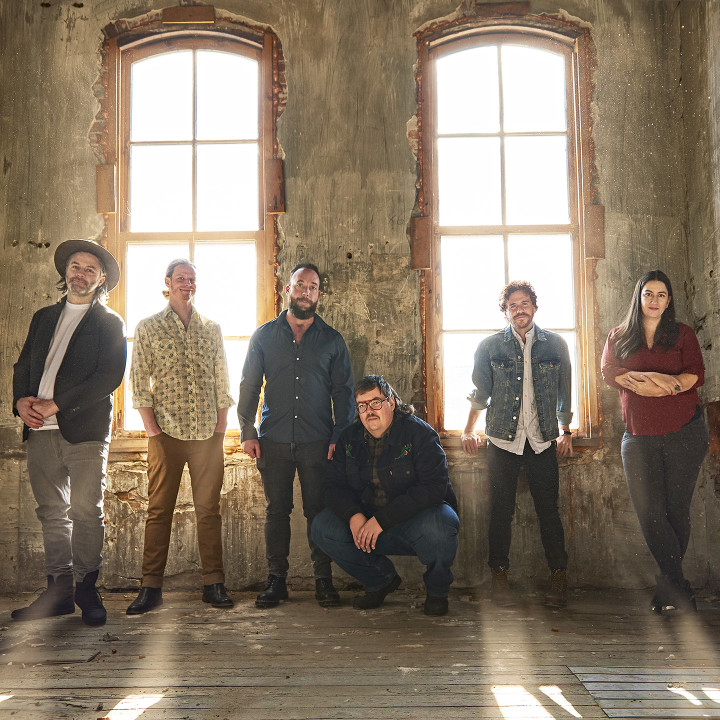 As the front man of The Strumbellas, Simon Ward can attest that balancing work and family life ain’t easy. Over the past few years, the musician spent a great deal of time touring with the indie rock sextet, traversing the globe and delivering standout performances at festivals including Bonnaroo, Lollapalooza and Austin City Limits. The other side of the coin, for Ward, is a bustling home in small town Canada with his wife and three young children. His constantly juxtaposed life is the thread that weaves its way through the fourth studio album, with Rattlesnake, a collection of sleek, bright songs that elevate their sound to frenzied new heights.

“This album is about one main character: this guy, me, who’s out there following his dream to have his music heard, but at the same time, he’s just trying to get home,” says Ward. “The reason it’s called Rattlesnake is because it’s about him facing his fears head on. Shedding his skin, evolving, and realizing he’s got these three kids that he’s responsible for. Little humans, they’re more important than anything. They have a way of really anchoring you.”

Rattlesnake, released March 29, 2019 via Glassnote, is a testament to Ward’s personal growth and evolution as told through nine emboldened tracks. The album, recorded on the band’s home turf in Kingston and Toronto, Ontario, is a musical step forward from the to-the-rafters scrappy folk aesthetic of their earlier work. For the album, The Strumbellas, made up of Ward (lead vocals, acoustic guitar), David Ritter (keys), Jeremy Drury (drums/percussion), Isabel Ritchie (strings), Jon Hembrey (electric guitar) and Darryl James (bass), teamed up with producer Tim Pagnotta (Walk the Moon, Elle King) and co-producer Brian Phillips, with the goal to capture the electricity of their live show with a decidedly more stylistic upbeat bent.

“This is even more of an exploration of those types of sounds,” says Ritter. “We really connected musically with Tim. We knew immediately that he could help us find out how big we could push our sound -- how upbeat, fast, exciting, heart racing a Strumbellas record could get. It felt like pushing ourselves to the limit of that possibility.” Adds Ward, “Tim understood how to take folky, roots songs, keep them centered around the acoustic guitar, but work with us to deliver them with a nice wallop of white-hot lightning.”

Lead single “Salvation” crackles with an aerobic gallop, and is already gaining traction on Billboard’s Alternative Songs chart. Elsewhere on Rattlesnake, they keep the energy sustained with the breezy dust up “Running Scared (Desert Song),” which Ritter describes as “desert folk,” while the chugging “We Were Young” is a love letter from Ward to his wife. But The Strumbellas also have a more melancholy meditative side, too, scaling back the swelling theatrics for the wistful acoustic guitar-strummed “The Party” and heart-eyed closer jam “All My Life.”

The Strumbellas, coming off of a banner few years, show no sign of their stride shortening. The group released Hope in 2016, which spawned the massive hit “Spirits,”.

The single hit No. 1 on the Billboard Alternative Songs chart and made sizable dents in Germany, Canada, Italy and France. Amid touring the world, they won the iHeartRadio Music award for Best New Alternative Rock Artist of the Year in 2017, and collected the JUNO Award for Single of the Year ahead of Drake, The Weeknd and Shawn Mendes.

For The Strumbellas, though, accolades are secondary to the connection that their music has with their fans. “I think it’s important that people feel something when they listen to music,” says Ward. “That’s my favorite thing: When I put my headphones on and it triggers something in me. It’s my hope that this music makes people feel something they may not have otherwise felt that day.”

“We’ve heard from people previously that our songs have helped people through difficult times, times when they felt alone, times when they felt not quite right for the world,” says Ritter. “I hope this record continues to do that, nestles into the nooks and crannies of someone’s life exactly the way they need it to.”