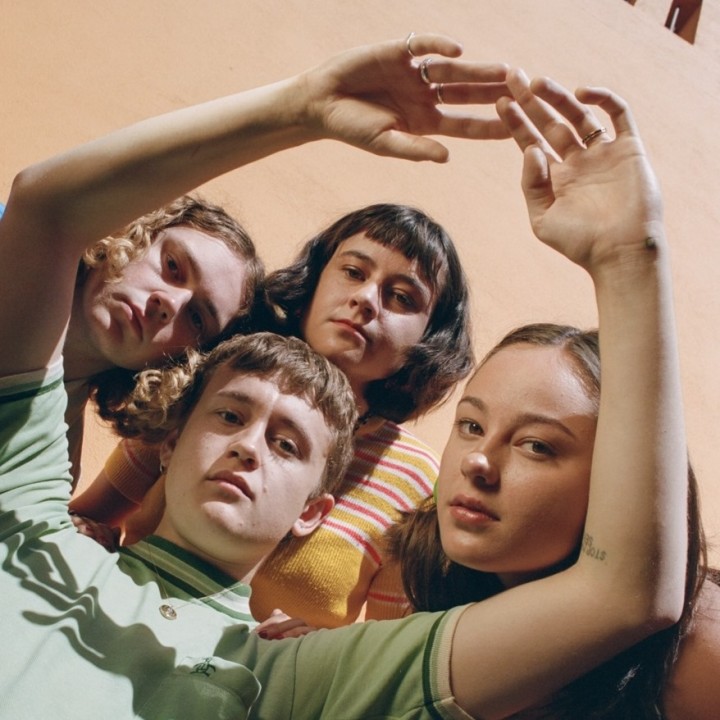 Defiant in the face of existential dread, The Orielles were always going to approach their second album with nothing but stellar levels of intent. Disco Volador sees the 4-piece push their sonic horizon to its outer limits as astral travellers, hitching a ride on the melodic skyway to evade the space-time continuum through a sharp collection of progressive strato-pop symphonies.

"Its literal interpretation from Spanish means flying disc but everyone experiences things differently. Disco Volador could be a frisbee, a UFO, an alien nightclub or how you feel when you fly; what happens to your body physically or that euphoric buzz from a great party," suggests bassist and singer, Esme. "But it is an album of escape; if I went to space, I might not come back."

Voyaging through cinematic samba, 70s disco, deep funk boogies, danceable grooves and even tripping on 90s acid house, Disco Volador is set to propel The Orielles spinning into a higher zero-gravity orbit. Written and recorded in just 12 months, it captures the warp-speed momentum of their post-Silver Dollar Moment debut album success; an unforgettable summer touring, playing festivals like Green Man and bluedot, and deepening their bond whilst witnessing the sets of their heroes Stereolab, Mogwai, and Four Tet. Disco Volador's library catalogue vibes stem from a band lapping up and widening their pool of musical discovery whether nodding to Italian film score maestros Sandro Brugnolini and Piero Umiliani, or the Middle Eastern tones of Khruangbin and Altin Gün. "All the influences we had when writing this record were present when we recorded it, so we completely understood what we wanted this album to feel like and could bring that to fruition," tells drummer, Sid. "This is the sound of where we are at, right now."

Returning to Stockport's Eve studios where the band cooked together, went swimming, took walks, and relaxed in the soundwaves of an occasional gong bath, Henry, Sid and Esme called a family reunion under the watchful whisker-twitching of studio cat, Adam ("He was probably a producer in a past life," they say). With keysman Alex now adding texture through his classically trained know-how, they re-joined engineer Joel, and producer Marta Salogni (Liars, Björk, The Moonlandingz) whose vast expertise of drones, delays and mad effects were so intrinsic to their Disco Volador vision -- sketched out by the band in Sharpie doodles on the studio wall. "Marta is so positive, she has a great way of getting the best out of us," guitarist, Henry tells. "Marta is the 5th Orielle," affirms Sid. "Because we'd worked together before, we were even tighter; it's a shared mind-set." For Marta, the feeling is mutual; "It's sonic tidying really, the band just do their thing and I work with that."

Built from instrumentals around the concept of "boogie to space, space to boogie," Disco Volador's energy comes from the melodic fission of tension and release. Recurring motifs explore space, not only of earth's celestial atmosphere, but also what happens within the gaps and how sound manipulation has the power to carry, or displace, its listener. "We like throwing in wide curveballs by taking the music somewhere different then figuring our way back... like jumping off," says Henry. "Jez from ACR taught us about pauses and that's massive on this record; space can be the most beautiful part of a song." In fact, by unleashing the tension with their own smattering of esoteric noise through delay pedal fuckery, the layered poetics on 'Whilst The Flowers Look' and 'Memoirs of Miso's saxophone stylistics (loaned by Glasgow band Lylo's Iain McCall), filling voids is exactly what gives the album its magic. "Those unplanned moments are great," Sid says, "mistakes can become something special. For these next shows we'll have to change our tech spec up so much!"

At times haunting and unsettling, Disco Volador's film-like structure flows from fact to fiction. Its tales are culled from waking life as easily as they become a soundtrack for lucid dream sequences. Watching Foley-inspired 70s thriller Berberian Sound Studio whilst recording may account for the album's dynamic sound effects -- created with Eve's array of instruments plus Henry's flexatone -- a Secret Santa gift from Esme. Lynchian outros capture the album's thematic dread as they spiral into infinity and pave the way for potential loops, imitating the fades between the songs of the band's summer DJ sets. Brian Eno-inspired dreams about a rocket-fuelled mission may or may not have inspired 'Rapid' or 'Come Down On Jupiter' after ideas sunk deeper into their subconscious. "I'd been reading about phenomenology and Czechoslovakian writer Milan Kundera's ideas about existence; the weight of your own body, what you feel and how that interacts with your surroundings," hints Esme, at possible inspiration behind the lyrics.

Whilst the future of the world and its current cosmic wasteland might be up in the air, The Orielles' new album has its feet beating out a much-needed four to the dancefloor. Welcome to Disco Volador; time really does fly when you're having this much fun.

Exclusive Booking Agency for The Orielles: Worldwide except North America