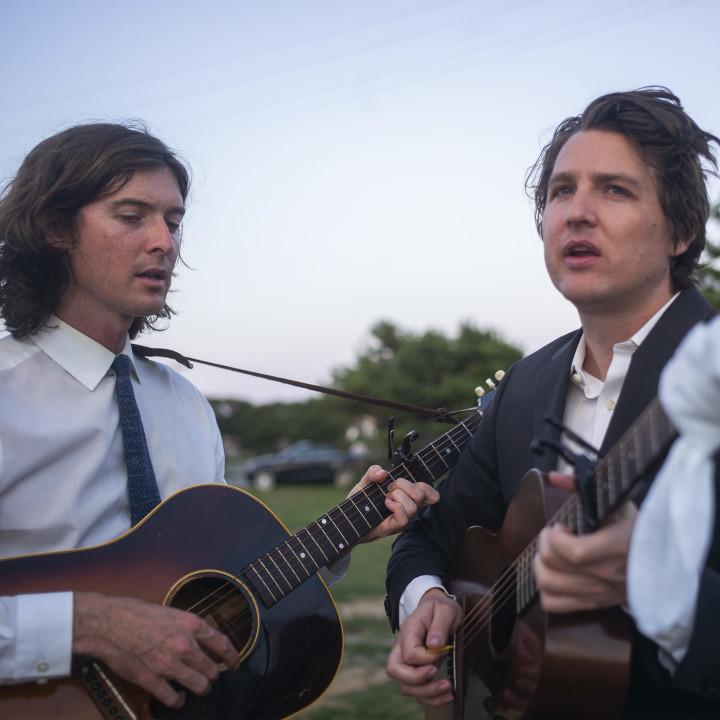 Completing their seventh studio album was a hard-won victory for The Milk Carton Kids, but I Only See the Moon was worth the effort for Kenneth Pattengale and Joey Ryan. "It feels like returning to something that's natural and comfortable, and also just as inspiring and new as when we first met," says Pattengale, who formed The Milk Carton Kids with Ryan in 2011.

What started as a three-week recording session in the fall of 2021, with Pattengale producing the contemporary folk duo himself for the first time, stretched into a months- long project that found the pair digging deeper into their craft than ever before. With a new studio of their own in Los Angeles and the realization that they were in no hurry, The Milk Carton Kids took the time they needed to be fully satisfied with I Only See the Moon.

"I haven't been as happy with the collection of songs that we've put on record probably since our first record, and it's because of a lot of the lessons we've learned over the years, including giving yourself time and space," Ryan says.

The three-time Grammy nominees sound refreshed on 10 new songs distilled to the essence of The Milk Carton Kids: two voices blended together in spellbinding harmony, accompanied by subtly perfect acoustic instrumentation. Turns out that's a tough sound to get just right, but I Only See the Moon shows just how much Pattengale and Ryan were willing to work for it.

Your last album, The Only Ones, came out in 2019. Things have changed since then.

Pattengale: It's totally a different world. For me, a number of life changes lined up where I moved back to Southern California, I got married, I sort of planted roots a little more deeply. I'm 20 minutes from Joey's door now, rather than the last decade, where I've lived 3,000 miles away and 1,600 miles away. And we found a studio space in North Hollywood that is available 24 hours a day, so we have a new opportunity to collaborate in the way that we hadn't in a decade.

Ryan: We were starting to fall in love with our jobs again, right before the pandemic hit. And I'll cop to the implication that maybe we had fallen out of love with it for a while, for a lot of reasons. Personally, I had lost touch with any sense of deeper purpose as to why we were doing it, but I came out of it with a renewed sense of why we got into this in the first place.

Why did you get into it in the first place?

Ryan: I consistently have the most meaningful and transcendent experiences of my life while listening to music, especially live music at a concert. I got back in touch with the idea that people aren't coming to our shows because they're impressed, or because Kenneth plays the guitar fast (though he does), or because we do this vocal harmony thing. They're coming for a much deeper reason, and it's that they really need -- we all really need -- the experience of being together and hearing music together.

Kenneth, you've produced other artists, including Joe Pug and Joy Williams. What was different about producing your own band?

Pattengale: Functionally speaking, the only important thing that you can do as a producer is to keep somebody from following their own artistic drive into a dead end. If you have enough audacity to think that you've identified what is potent about someone's artistic endeavor in the moment, you want to track that down the street and make sure it doesn't crash.

Making I Only See the Moon was supposed to take three weeks. What happened?

Ryan: We needed more time. Three weeks is three times more than any recording session we've ever had. We've never spent more than a week, or maybe nine days on All the Things That I Did and All the Things That I Didn't Do, our album that had 15 people on it. But we spent three weeks and that felt luxurious and we got to the end of it and we realized we only had three songs that we liked, even though we had recorded 12. Kenneth said, "We don't have it. It's not a good record." I wouldn't have had the balls to say that. I was probably in a little bit of denial about whether the songs were good enough.

Pattengale: As the producer, putting my foot down after those three weeks was easy. The harder part was going back on the other side of the line to just keep writing and writing. We clocked another six or seven months making this album, which also coincided with a number of significant life events that tried to derail me, including a bad bout of COVID and a terrible car accident. But despite all of that, it ended up being exactly the timeframe we needed to shake off some kind of collective writer's block and find a renewed collaborative purpose in what we were trying to say, or where we were trying to land artistically.

How did you hold on to that spark of creativity when you were not as in love with your jobs as you are now?

Ryan: Lots of different things. Monterey, we made while we were on tour. Then we made the album with 15 other people when we decided we wanted to make a full-band album. It's like a successful marriage in that there's always been enough there between us collaboratively in the way that we work together, sing together, play together. It's a very special thing. And I don't think we ever took that for granted.

Pattengale: The problem we were solving for was different all of those years. But we're back on a track that is really exciting and expansive. It feels like there's a new exciting world around every turn. Both of us have now lived enough life to understand that maybe one of the purposes we were put on Earth for is to sing together, to write songs together, to make music together. It has truly provided a direction for our lives.