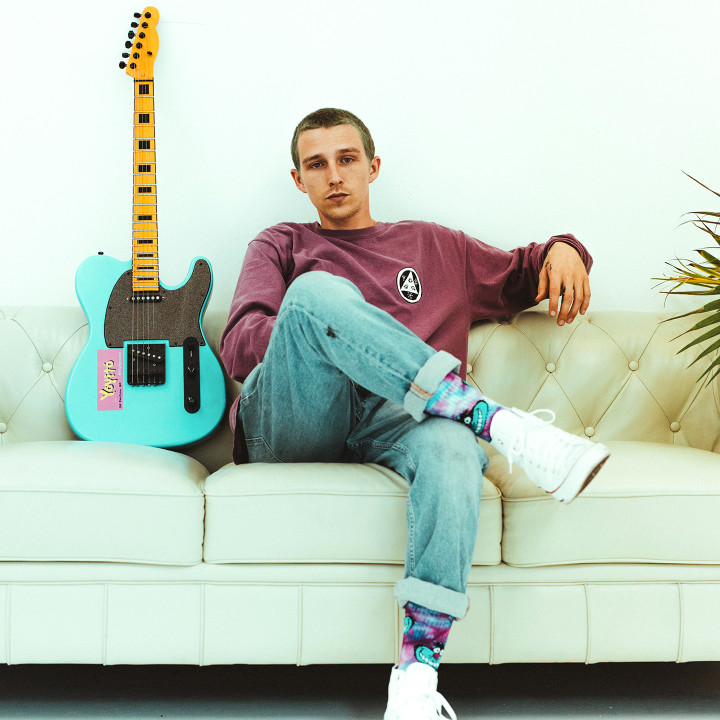 The magic of a kaleidoscope is its constantly changing colors, shapes, and impressions. Bring the glass into the right light and the whole picture strikes you in a completely different way than before. The Kaleidoscope Kid takes his name very seriously -- blending psychedelic strings with hip-hop style percussion into a genre-bending musical phenomenon, tying everything together with his casual yet precise lyricism and stylized performance persona.

Upon signing with Regime/Suburban Noize Records, The Kaleidoscope Kid released his stand-out single "Hold Up." The Phoenix singer/songwriter/emcee now returns, with the release of his self-titled Suburban Noize album debut, dropping March 11th, 2022.

The Kaleidoscope Kid, equipped with blues-style electric guitar riffs and an all-encompassing lust for life, guides listeners through his album like a Shaman to a psychedelic trip -- taking inspiration from his personal journeys experimenting with eastern medicine and hallucinogenic mushrooms while living off-the-grid and in the woods during his lengthy recovery from a ruthless autoimmune disease.

Admitted to the hospital at 21, The Kaleidoscope Kid was bedridden for months, too weak to eat, walk, talk, or sing -- an unfamiliar lifestyle for this Phoenix, Arizona native who grew up on skateboarding, visual art, and outdoor escapism. After countless failed treatments and dumbfounded doctors, The Kaleidoscope Kid moved into the mountains of Sedona, Arizona, and began experimenting with reishi mushrooms and various organic berries to manage the disease, playing guitar in every spare second to cope with the intense traumas of such a severe loss of physical autonomy. He also began to add Hallucinogenic mushrooms into the mix -- sometimes tripping for weeks at a time.

Slowly but surely he regained his voice, and took that as a sign from the universe to devote his life to music. While living in a Phoenix Recording studio, he recorded his first demos that would ultimately get him signed to indie powerhouse label, Regime/Suburban Noize Records.

The wide range of his lifestyle and experiences has translated into a diverse style of music, bringing about a sonic landscape that echoes his passions and interests. Inspired by an extensive catalog of musicians -- spanning from Beck, Pink Floyd, and Cage The Elephant to Bob Marley and Sublime -- his work is an intentional reflection of his ever-growing passion for the craft. Through a delicate combination of life experience and allegory, The Kaleidoscope Kid creates an ethereal world that's both relatable and alluring.

His first single "Hold Up," continues to gain momentum with his edgy vocals and idiosyncratic flows. The song now has surpassed 1.9 million streams on Spotify, as more and more fans are drawn to The Kaleidoscope Kid's genre-bending artistry. The music video for the song plays like a cinematic homage to Breaking Bad -- the singer wrestling with a bad trip and burying his ego in a shallow desert grave.

The Kaleidoscope Kid's music is sure to resonate with many and inspire a new trajectory of composition that breaks the customary rules of genre. As we all know, there are some rules that are begging to be broken.

Arizona newcomer The Kaleidoscope Kid is here with his self-titled Suburban Noize Records album debut. Blending counter-culture music with his broad musical and personal appeal, The Kaleidoscope Kid is a gifted songwriter, artist, and designer. With a humble and thoughtful approach to every interaction, it is clear that he has found clarity in his inner-self. He is wise beyond his years and breaks the stereotypes of a typical rockstar or musician. It is that much sought-after wisdom that guarantees The Kaleidoscope Kid to induce a sense of sonic nostalgia to hungry mainstream audiences.

At the age of 21, The Kaleidoscope Kid found himself in a hospital bed fighting to survive a debilitating autoimmune disease that was ravaging his body from the inside out. Exhausted by constant testing and misdiagnoses, The Kaleidoscope Kid sold his worldly possessions and escaped to the mountains of Sedona Arizona, where he learned to manage his symptoms holistically, and discovered his musical prodigy. "Playing guitar and writing was the only thing that kept me going, and in those moments music became medicine. It gave me something to live for." After 4 years living outside, regaining his strength, and finding himself through music he signed a deal with Regime/Suburban Noize Records to bring you his eponymous LP "The Kaleidoscope Kid."

With catchy songs that will reference "Bukowski" and a "Rubix Cube" in one line, then transition into a hook that will leave you singing it for days, The Kaleidoscope Kid could not only be what Alt Music needs, but with his humble and insightful point of view, it seems he's what the world needs too.

Exclusive Booking Agency for The Kaleidoscope Kid: Worldwide except Europe