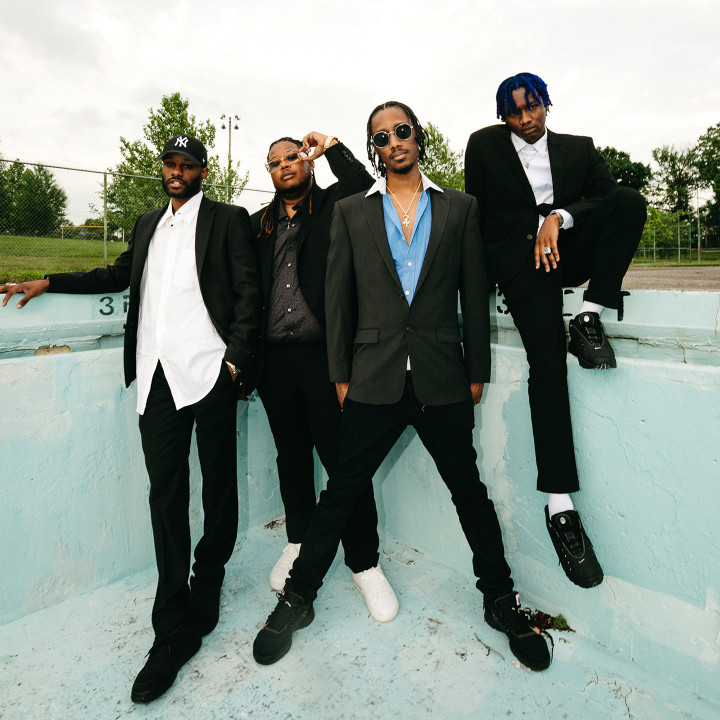 "We aspire to push boundaries," explains Ace Pro. As one-fourth of The Homies, he joins singer-songwriter Quiiso, hit-making producer/artist 2forwOyNE, and lyricist Shloob. This self-contained Louisville, Kentucky quartet has amassed over 20 million streams with a brand of Hip-Hop that courageously experiments with R&B, Jazz, Pop, and Funk. After two popular albums and hit videos like 2021's "The Come Down" and 2018's Jack Harlow-assisted "Leaf Wraps," the brotherhood prepares their boldest statement to date, It's A Lot Going On. Having helped galvanize Louisville's scene throughout the last decade, The Homies intend to welcome more listeners to their party. That is evident in the just-released video single "Shake." The song is energetic, fun, and catchy -- true to The Homies' formula. "Our mission is bigger than our ego," Shloob says of an independent movement rooted in creativity.

The journey began back in 2012. Brothers 2forwOyNE and Shloob were freshmen at the University of Louisville. There, they connected with a Chicago transplant, Quiiso, and another musician who was not enrolled, Ace Pro. Ace, also a videographer and visual artist, had worked with Bryson Tiller and other figures around the city. However, as the four creatives began hanging out, they all realized something extraordinary. "The era allowed us to build a bond and a chemistry amongst each other," recalls Quiiso. "You can hear our personal relationships in our music." Initially a production collective, the four men quickly realized that they were elite artists. Each quarter of The Homies brought outstanding skill and style. While Ace had a vision, 2fo' became the lead producer; Shloob shined with raps, while Quiiso had a songwriting and Jazz background. "I realized that there's no way I could lose with these three guys in my corner," says Shloob of then and now. The four inspired each other to become a sum greater than their parts.

By 2016, The Homies were making inroads. "FIU (2 Times)" became a grassroots hit around town. "Louisville is a melting pot of cultures, people, and styles," Quiiso explains. He points out that The Homies' music reflects that vibe, spanning genres and lifestyles. During this time, the foursome linked with another Hip-Hop hopeful in the city, Jack Harlow. "Jack made his way around The Homies, and it became a genuine friendship," says 2forwOyNE. "He heard my beats, and it went up quick." 2fo' went on to lace Jack with "Dark Knight," co-found Private Garden, and executive produce his 2017 breakthrough, Gazebo.

As peers of Jack, Bryson, and a former classmate of EST Gee, The Homies are part of a movement making Louisville a music destination and culture. These artists remain close-knit and collaborative. "Why out-source when you have talented friends around you," rhetorically asks Shloob. "We feel like we've been overlooked and unheard for so long," Ace Pro says of Louisville's explosion. "Why jump on this wave or that wave when you can build it yourself?" After a regional hit in 2018's "On Gawd," The Homies kept climbing -- as labels took interest and their audience broadened. Touring with Jack Harlow added to the exposure. 2020's debut album Umbrellas was a collection of songs that showed all of the range and capability -- 2021's Honest Living scaled on that base with multiple tracks reaching millions of streams.

In 2022, The Homies refuse to be patient or go quietly. "Shake" is designed to grab the listener's attention and keep them there, emphasized by an Ace Pro visual. Summertime follow-up "Goat Mami" illustrates the crew's versatility. 2Fo' made the song with Jack in mind but then built it for The Homies. Another upcoming look, "Topic," is a response to the noise on social media and all the information people get at once. These diverse moments make their way onto It's A Lot Going On. As The Homies enter their upper-twenties, the AWAL-distributed album reflects changes in their lives and the world. After a decade of building the strongest of creative foundations internally, The Homies intend to make a lasting relationship with fans.