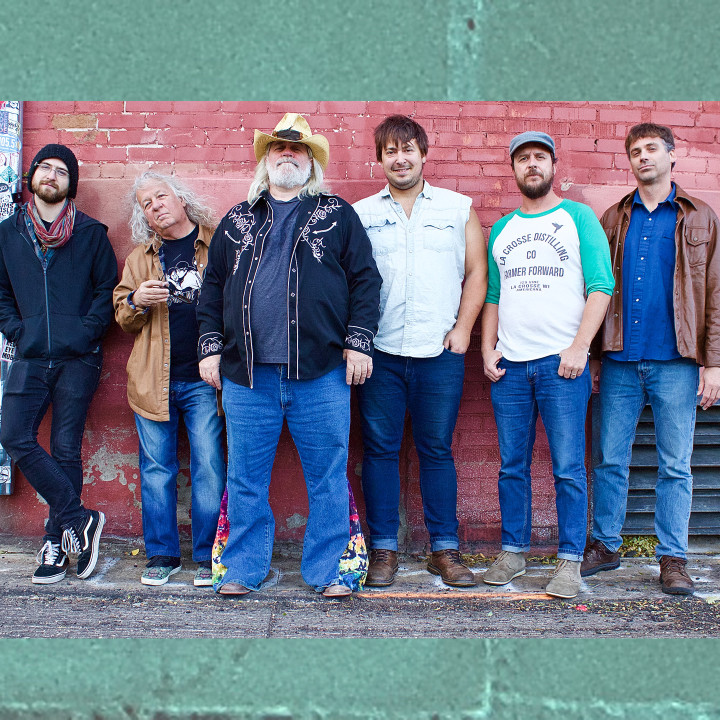 The word supergroup gets overused to describe side musical projects, but it's apt and well-earned when it comes to The High Hawks. With nearly 150 years of collective touring and playing between them, Vince Herman (Leftover Salmon), Tim Carbone (Railroad Earth, Blue Sparks From Hell), Chad Staehly (Hard Working Americans), Adam Greuel (Horseshoes & Hand Grenades), Brian Adams (DeadPhish Orchestra) and Will Trask (Great American Taxi) have maintained a generation-spanning presence at the forefront of the roots music scene for over two decades.

But talk to the band members, and you'll find that their reasons for getting together were much more down to earth.

"Sometimes you meet somebody and you hit it off, and you feel like, 'Man, I don't want to just look at the cover, I want to read that book,'" says guitarist Adam Greuel with a laugh. "It's a tight-knit music community in our Americana-bluegrass-jam band world. Over the years, we all kept bumping into one another and realizing there was a deep sense of fellowship and kindred spirit. The main impetus to form The High Hawks was really a curiosity about one another, both musically and personally. This band came out of a yearning to hang out."

"And the reason I think it worked so well is that we'd known each other for so long," agrees multi-instrumentalist fiddler Tim Carbone. "I've sat in with Adam's band. I produced two Great American Taxi records. I've worked with Chad in super creative situations. I've known the guys in Leftover Salmon for over twenty years. It's one big happy family. It's kind of the perfect situation. You have a group of guys who know and love each other. And oh yeah, by the way, we get to play these cool original songs too."

But two years ago, when they first convened at guitarist-singer Vince Herman's house in the Rockies, there was no clear road map for where they might go. Greuel says, "We had a run of shows booked in Colorado, and we didn't know what kind of music we were really going to make. Everybody brought a few song ideas along. It was two days before our first show, and that's when a lot of the songs came together and our whole vibe as a band came together. We have shared influences, shared musical vocabulary, but even with that, there was a kind of telepathy that was like, 'Holy moly, not only should we be playing some shows, but let's cut a record too!'"

"We went in with zero expectations," says Carbone. "Once we got together and played the songs we had in mind, it was like, 'Wow, there's something going on here! This is not just a bunch of guys playing some songs. This is a band.'"

Indeed, the baker's dozen of songs that make up their debut have the strong identity and cohesiveness of a band three records in to their career. The summery, fiddle-infused opener "Singing a Mountain Song," with its self-referential line -- Soaring like a high hawk across this mountain top -- acts as a kind of mission statement for the whole collection. There's a lot of good feeling and optimism in these grooves, from the celestial cowboy vibe of "White Rider" and the revved-up Cash rockabilly of "Bad Bad Man" to the catchy, sauntering "Do Si Do," which sounds like a great lost Grateful Dead track, the spare emotional cover of Woody Guthrie's "Fly High," and "Just Another Stone," a moving ode to love's redemptive power. Throughout, the creative hand-offs between four songwriters and four distinct singers all come together to channel influences from bluegrass to folk to reggae to cosmic Americana into a singular, appealing voice.

"All of us love The Band," Greuel says, "and I think part of the reason they're so compelling is the different kind of vibes that come into one shared unit. You have different vocalists, different songwriters. You bring in all these songs and they have different vibes initially. But when they're brought to the other players, they all kind of become one within this band. These songs wouldn't sound like High Hawks songs if it was just one of us playing them. When it all comes together, there's a sound."

"I think we all appreciate the freewheeling aspect in this band," Carbone says. "In Railroad Earth, we have a great songwriter and we kind of follow his lead as far as creating the structure of the arrangements and the sound. The process is largely the same from record to record. That's my job, my career. With the The High Hawks, I had more of a creative hand in writing and producing. It's different because there are multiple songwriters, and everyone's bringing something to the table as a song. Everyone seemed to get out of everybody's way, but also help everybody do their thing. It was refreshing."

When it came time to name the band, they looked to the skies. Literally. "All of us started noticing that there would be hawks everywhere," Greuel says with a laugh. "Sometimes in really uncanny ways. Aside from its beauty and grace, I think there's a really cool mythology associated with the hawk, about intuition, unification and spiritual awareness. It seemed to match the music."

Carbone adds, "For me, the name kind of embodies freedom, and scaling the heights of creativity. It's that rare moment when everything gets to another level and you feel like the people that you're working with are enabling you to be at your best."

Of course, any new creative endeavor these days has to pass through the reality check of the pandemic that we're all living through. While the band remains hopeful that they'll be able to play some live dates by the end of the year, for now, they're more focused on sharing the positive, healing vibes of their debut album. "There's a lot of stuff on this record that's soulful and soul nourishing," says Carbone. "That's what I get out of it. So I hope that people who listen will get something similar -- a replenishment and a nurturing of the soul."

"We all came together at a time when we needed one another," says Greuel. "I don't know that we all knew that initially, but it slowly became apparent that the closeness that occurs from being in a band really ended up being good medicine for us all. We have a never-ending text message thread that keeps us all laughing and communicating and sharing songs and discussing trials and tribulations. Being an ear for one another and giving each other a sense of fellowship has really been awesome. I might hope that that sort of vibration can extend from the band to the folks who listen to the record. Maybe they can find a feeling of togetherness from the the music. Maybe in some ways know that that they're not alone in some of their struggles. Maybe some of the songs can make the good times better and the bad times bearable. To me, that's the greatest gift of music."