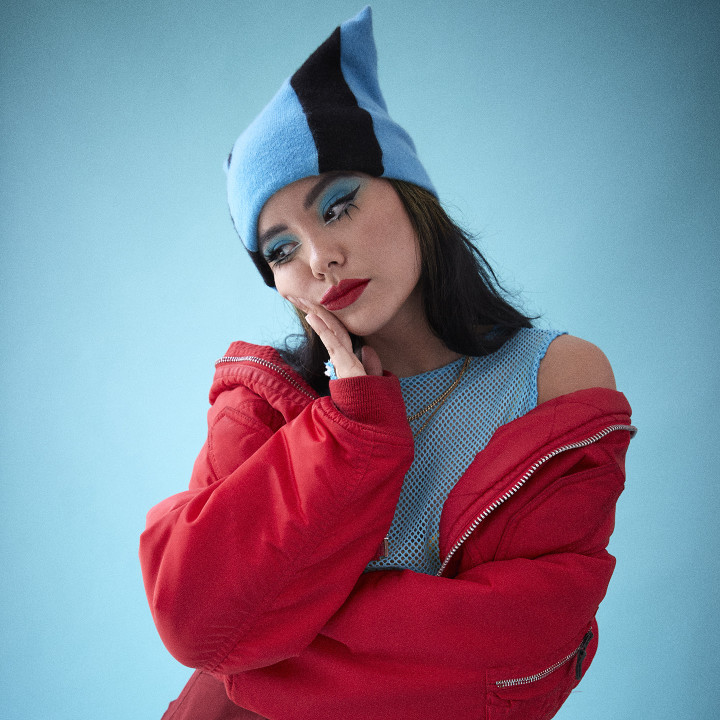 My favorite word is "BLISS," says THE BLSSM. The artist -- colorful, and endearingly vibrant -- demands the listener's attention almost immediately, capitalizing and enthralling each letter in their song titles. This kind of intention -- and attention-to-detail -- has served as a guiding force for the effervescent spirit, Lily Lizotte (non-binary & favoring they/them pronouns) carries and more presently, their all-new EP, PURE ENERGY.

THE BLSSM recently changed their name from "THE BLOSSOM" to its current stylization, stating "I wanted to shorten it to something more abstract and less literal," they said. "And I like that it sounds like it has the word BLISS in it."

Splitting time between New York City, Los Angeles, and Sydney, Australia, THE BLSSM is well traveled. And their music reflects it. The singer-songwriter's ability to feel voyeuristic while remaining rooted in self-imposed reality is only upended by their desire to rip off the band-aid and show off a whole new world of emotions. Encouraged to explore their natural inclination for self-expression by family members early on -- their father Mark Lizotte, who assists on guitar arrangements across the new EP, and their brother, who's responsible for playing N.E.R.D. around their artist residency, were instrumental -- during adolescent years. And THE BLSSM immersed themselves into it, in as many ways as possible, from taking up fashion design and crafting visuals to match their soundscape sensibilities, to carving out room for a tribe of like-minded DIY Internet dreamers to find their seat at the table.

The BLSSM proves it's possible to be an anomaly and an amalgamation all at once. A product of their influences and experiences, THE BLSSM opted out of formal education, and found struggles to blend in the more traditional spaces they occupied, in search of fertile ground to plant new seeds for their symbiotic art to grow. Writing in their bedroom, often alone, THE BLSSM explored hip-hop, grunge, shoegaze and alternative pop, laying the framework for their eclectic range of sounds that meld seamlessly, reminiscent of a young, brazen Amy Winehouse to that degree. From a generation of Kanye [Ye] disciples, THE BLSSM defies structure, instead using their energy and intention as a compass for their growing music discography, that's now given them a community of collaborators alike -- Brockhampton's Kevin Abstract, Matt Champion, Romil Hemnani (who notably met on popular forum KanyeToThe) and producer, TK.

But if you let them tell it, THE BLSSM has lived a whirlwind life and with that, comes a whiplash of truths and a visceral tide of ups-and-downs, anxiety and depression, things that thrill doesn't tell you that you're left to cope with. And that's where many of the songs' thematic paths begin -- not linear, but rather the bed of rocks at the foot of the ocean, constantly being brushed upon and absorbing energy, and then redirecting it in the best possible direction -- oftentimes back into the ocean, where it can be free and unimpeded. "To express myself, I've learned how to jump off a million cliffs when it comes to taking risks," THE BLSSM explains. "My project [PURE ENERGY] is about feeling everything at once and looking like a bit of everything, too."

Overcoming these transgressions with a vulnerable yet celebratory project, THE BLSSM activates the maximum version of themselves to explore difficult subject matters as overtly and as self-aware as possible on PURE ENERGY. "Maximalism at its core, I hate minimalism! I'm a maximalist," THE BLSSM declares. The thing about THE BLSSM is, they are pensive as they are instinctual, and the music ebbs and flows with a similar ethos. THE BLSSM may operate on the fringes, but one peak inside, and it's quite intoxicating. Take a song like, "LITTLE KING," that feels idly but is a strong-suit, creating the kind of inexplicable connective tissue, similar to what Young Thug's prodigy, Yung Kayo, is able to do over emotional tracks. And then see "I HATE SUNDAY," which feels like early aughts popstar nostalgia and Eddie Bauer-edition fords.

On PURE ENERGY, THE BLSSM delivers a silhouette on canvas, for us -- the audience -- to paint in our own reflections and personal experiences. THE BLSSM bears their soul over head-bobbing kick drums and sweet, sprawling chords on Mark's guitar. They effortlessly weave together a body of work that is strikingly cohesive yet undeniably unique. Their songwriting hat finds soft familiarity with greats such as Elliot Smith, one of their biggest influences, and steadies as the creative undercurrent that keeps THE BLSSM at-bay, allowing them to digest themselves, like a caterpillar, and reimagine itself, through a new cell arrangement, as a butterfly.

And thus, THE BLSSM continues to evolve in their artistic journey, carrying their burdens like a charm. It's a reflection of their personality -- one where darker elements are intertwined with online humor and matter-of-fact playfulness -- and it makes for a project that cuts through, bringing together all the exciting worlds that originally inspired Lily to start this adventure. And most importantly, THE BLSSM remains unapologetic about it, "That's all my project is, it's very loud and unimpeded. This is what pop music sounds like to me. This is what I wanted to make."

Exclusive Booking Agency for THE BLSSM: Worldwide except Europe