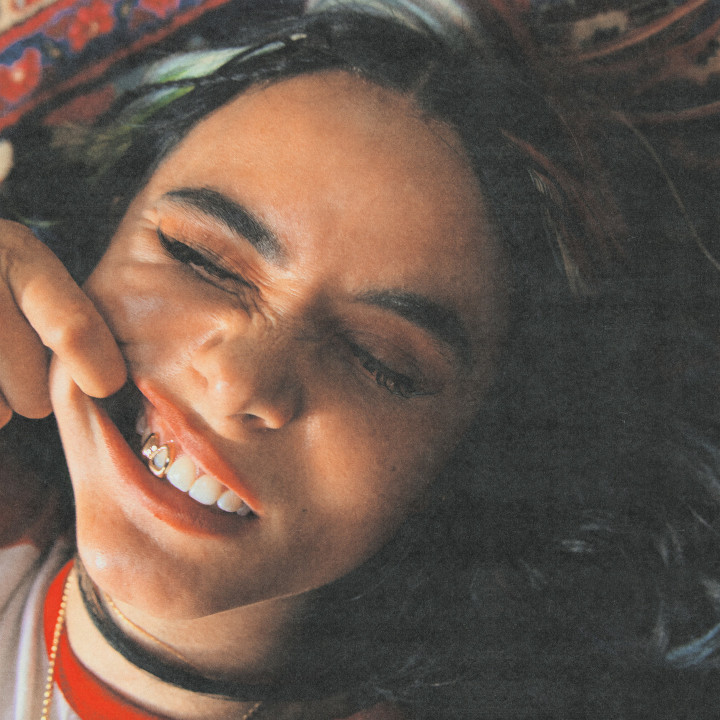 Although Los Angeles based, Sydney-born artist Lily Lizotte began refining their craft as a songwriter during their pre-teen years (Lizotte is gender non-binary and uses they/them pronouns), it was as recent as last year that they took on the form of their current moniker, THE BLOSSOM. Lizotte wanted something that evoked a certain sense of expansiveness rather than anything that felt pointedly gendered, settling on a name that brings to mind natural growth, evolution, and the slow process of opening up and self-actualizing.

It's an all-embracing moniker that reflects the patchwork spirit of THE BLOSSOM's music, a quality that Lizotte masterfully crystallizes on their upcoming debut EP, 97 BLOSSOM. Slated for release in April, Lizotte effortlessly juxtaposes seemingly disparate elements such as grunge and shoegaze against the bass-heavy nature of hip-hop into something strikingly cohesive yet undeniably unique. "HARDCORE HAPPY" possesses the warmth and familiarity of Mazzy Star but launches it into the modern era with its chest-thumping kick drum and skittering high hats, whereas "SHAPESHIFTER" proves that Lizotte is equally capable of writing an unabashedly anthemic pop song. Lizotte's songwriting is propelled by forces like anxiety, adrenaline, and instinct, but this doesn't mean that there aren't more unhurried moments on the EP as well: "BLACK EYE" takes the familiar trope of a piano ballad and flips it on its head, with gnarly, distorted 808s stylistically overpowering the warped ivory keys and Lizotte's voice soaring overhead, proving that trunk-rattling low end and unabashed pop melodies can properly coexist.

Born to a family of artists -- Lizotte's father, Mark Lizotte, is a staple of Australia's music scene -- Lizotte spent their childhood between New York City and Sydney. They moved to Brooklyn as a young adult, kicking off their fashion tenure as a designer in the Lower East Side, however songwriting was always the creative undercurrent that grounded them.

It was this gravitational pull towards music that inspired Lizotte to move to Los Angeles last year, and the community of like-minded artists they have met there have set their wide-ranging references and innovative songwriting into greater focus. Though Lizotte had been writing and recording consistently, it wasn't until they had met the boys from Brockhampton (Kevin Abstract, Romil Hemnani, Jabari Manwa, and Matt Champion) that the songs on 97 BLOSSOM started to fully take shape last August. "We're just really like-minded and have a similar approach to the writing and recording process," Lizotte says of their Brockhampton collaborators. "We instantly became friends -- we share a lot of the same influences and values. We work really instinctually and we have this sort of open, almost over-sharing sort of nature."

In addition to the Brockhampton crew, Lizotte collaborated extensively with their father on the EP. They wrote "CONFETTI," the EP's first track together, and the elder Lizotte plays guitar on almost every song on the EP. They share similar sonic foundations -- Lizotte's father put them onto a lot of the '90s rock music that they cite as references in describing their own sound. They'd work out guitar melodies over FaceTime, with Lizotte's father recording and sending in his guitar parts from Australia and Lizotte working from Rick Rubin's Shangri-La Studios in Los Angeles. "I didn't do any takes in the vocal booth," Lizotte says. "I'd just grab the mic and sing in front of everyone. We recorded it in one take. On "SMOKE," Matt [Champion] and I just passed the mic back and forth between each other."

Lyrically, the six songs on 97 BLOSSOM amplify Lizotte's full emotional spectrum: insecurity, gender dysphoria, depression, anxiety, and growing pains are all woven into the fabric of the songs. Lizotte describes the process of writing the album as one in which they were perhaps overly self-aware and hyper in-tune with their feelings. "I was licking my wounds as much as I was carrying new ones," they describe. Their songs are mostly about how they feel about their feelings, a perspective that's almost an abstraction of the raw emotion itself. It's a reflection of their personality -- one where darker elements are intertwined with humor and playfulness -- and it makes for an incisive debut that melds together the distinct, exciting worlds that inspired Lily to start this journey originally.

Exclusive Booking Agency for THE BLOSSOM: Worldwide except Europe