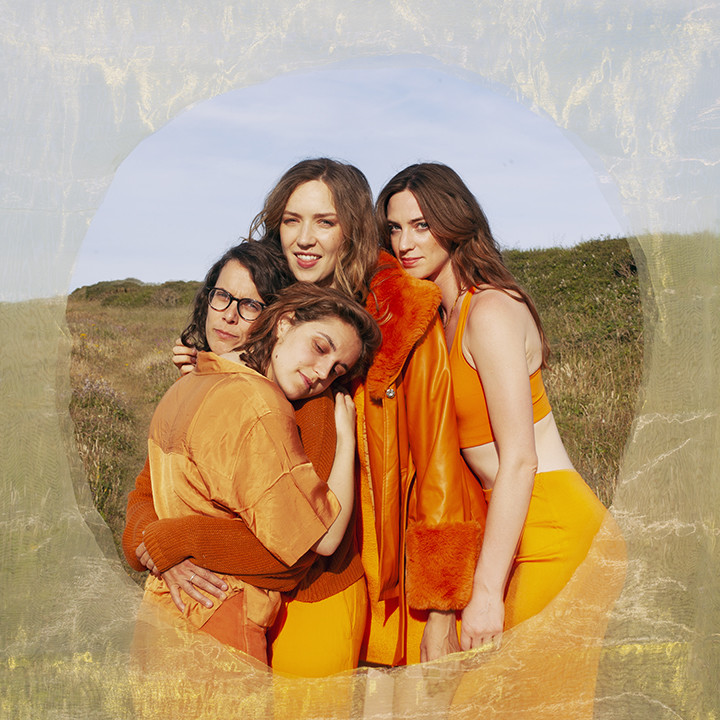 A few things have changed for Mercury-nominated, alt-pop four-piece The Big Moon, since you last saw them. Most notably; they've gained one very tiny new member.

Started in the middle of lockdown, and the majority recorded when frontwoman Jules Jackson was six months pregnant, their upcoming third album 'Here Is Everything' has been on a journey alongside The Big Moon themselves. Finished when little baby Moon turned nine months old, the album captures an enormous period of change for the band: a time of uncertainty, of global unrest, pregnancy and new motherhood -- but all bound together by the unbreakable ties between Jules, bassist Celia Archer, drummer Fern Ford and guitarist Soph Nathan.

'Here Is Everything' is just that: four women laying it all out on the table.

When touring for their Top 20 second album, 'Walking Like We Do' (released, January 2020) came to an abrupt stop, the band found themselves locked down physically apart for the first time since the group's inception in 2014. Each dealing with their own set of struggles thrown up by the pandemic -- concern for loved ones and an uncertainty at the future -- Jules optimistically began writing what would form album number three. 'Here Is Everything' is a diary, a real time account of what it's like to discover you're pregnant during a global pandemic, grow a human inside you, and give birth: all the while feeling the many anxieties that accompany that experience. It's a record about feeling your way through the unknown, leaning on your friends to help guide you.

"There were times when it was really hard to write, and you can really hear that in some songs," admits Jules. Being pregnant over lockdown came with its own set of unique anxieties, that many new parents will be able to relate to. "I spent a lot of time thinking, 'What even is going to be here for you?'" she explains. "Like, what even is this place?"

Through songs as snapshots, we get a glimpse into every phase of motherhood. Album closer 'Satellites' was penned in the midst of debilitating morning sickness. Over pared-back piano Jules' rich vocals question "I wonder which parts of me, my kids are going to hate," her early pregnancy anxiety on full show.

'High and Low' was written post birth when Jules was feeling her most sleep deprived and least creative, "experiencing the gnarly rollercoaster of highs and lows that happens to you after birth, unable to find the right words but able to instinctively find a chorus big enough to project how I was feeling."

But when things were hard, the band's incredible union meant that failure was never an option: a bond that has built the very bones of the record and can be witnessed in the heart-tugging video for first single 'Wide Eyes.'

"Together, we're like one organism when we troubleshoot problems," says Celia Archer of their bond. "Someone's hurt their back, so we carry their kit. Left leg's not working, so we grow an extra limb, like Power Rangers! But when Jules told us she was pregnant, Fern and I were in the car and we were like: 'This is a new thing! How do we do this one? We can't breastfeed for her!"

When the band first came together to record the album in Suffolk for a few weeks in the middle of last year, they found something was missing. After so long apart and despite Jules' heart-on-sleeves lyrics, something wasn't quite coming together in the room. "There was a huge disconnect between what I was hearing and what I should be feeling," explains Fern. "I found the whole thing so frustrating, because I'm watching one of my best friends going through this huge thing and talking about things that I can connect with. But I couldn't feel anything."

Fortunately, rather than spend her lockdown baking bread and bingeing boxsets like most of the UK, Fern had upskilled, building a home studio and teaching herself Pro Tools and production techniques. The band decided to park the pressure of booked studio time, to take the stems of what they'd worked on along with Jules' raw and beautiful lyrics and finish the record at Fern's house, with cups of tea and cuddles with Jules' baby in between songs. The luxury of time allowed them to reconnect as a four and create what is without doubt, The Big Moon's most collaborative and rousing album to date.

"I think we've always said about how much we care about each other and support each other but it's MORE now," says Celia of the process. "I didn't think we could have been better friends than we were before but we could."

There are tracks that hit massive highs, especially the songs of freedom post lockdown. "A trip to Ladye Bay in Bristol was a particularly beautiful moment that summer and I'm so happy I managed to capture it," Jules says of the coastal town that lends its name to one of the album's tracks.

"There are love songs," she continues "I was shocked by the new depths of love you can find for your baby. And the love you can feel for a partner who selflessly helps you through the darkest and strangest times of your life. Someone who will literally hold a pot for you to piss in after a caesarean section."

For four friends to come together to tell the story of one woman's journey into motherhood is an incredibly poignant thing. On 'Here is Everything,' The Big Moon, cement their place as one of the UK's most genuine and affecting bands, one that show us the power of welcoming women into this space.

"I know that growing a human in your belly is the most normal thing on earth, and yet if you speak to the person its happening to, you'll find it never stops being extraordinary too," Jules says. "I hope this album tells that story. I tried to be as honest as I could. I don't think enough mothers have the time to tell their stories, especially during the wild ride of the first months of parenthood, so I hope that by adding mine to the pile, exhausted and lovesick mums might feel a little bit more seen."