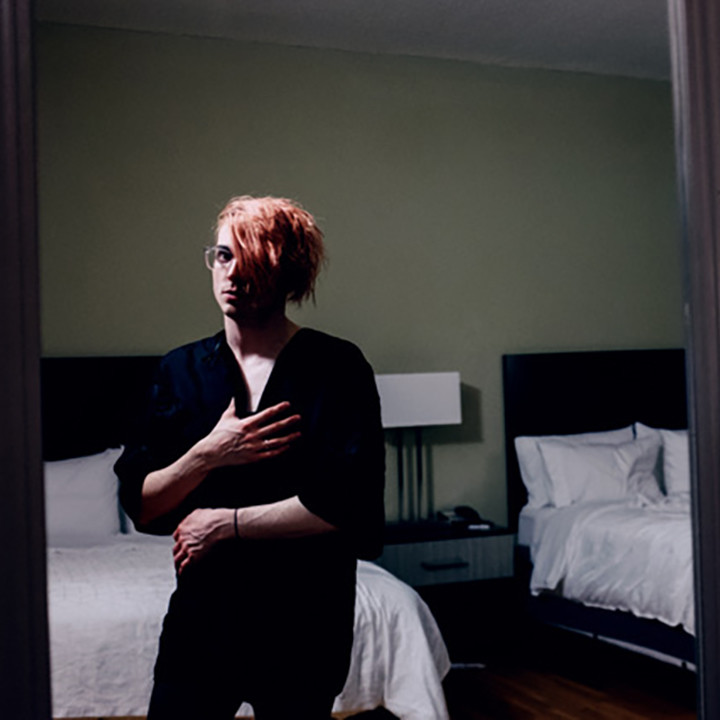 The first time Sam Ray nearly died was when he was just a kid. Thrown into a pool by someone who didn't know he'd never been able to swim, he struggled and thrashed about for a bit, but eventually, he ran out of energy and sank. "It was a true acceptance, complete and total serenity," he remembers. "Then I got pulled outta the pool and I was thrown back into real life." That peace has stuck with him over the last few years, as he's grappled with health issues, watched the world slowly die around him, and worked, intensely, on his first new music as Teen Suicide in over half a decade.

In some ways, it's the same sort of theme that's been on Ray's mind since he first launched the ever-evolving project -- which began with a series of no-fi punk songs recorded at home with friends. The world doesn't matter, life is inherently painful, but you always find a way forward amidst the bleakness. For his part, at 31, he finally feels grown-up, and a little more self-assured -- his new album, honeybee table at the butterfly feast, offers less of the desperate emotional thrashing of his youth.

The album was written over the course of several years while Ray struggled with a mysterious respiratory illness, which made it very difficult to perform and record -- and eventually led to a near death experience. Yet honeybee table at the butterfly feast is still as vibrant and wide-ranging as previous full-band efforts from Ray and whatever constellation of musicians make up Teen Suicide at a given time. From delirious ambient compositions ("another life") to frayed punk songs ("Death Wish") to chest-caving grindcore ("Violence Violence") to tender acoustic ballads ("it was probably nothing but for a moment there i lost all sense of feeling"), honeybee table at the butterfly feast is among the most ambitious collections of songs yet from a songwriter whose desperate obsession with never doing the same thing twice is his only signature. But for all the compositional restlessness, the songs themselves offer moments of respite from the horrors of existence. On "groceries," Ray and his wife Kitty detail the unexpected beauty of seemingly meaningless tasks like doing the laundry or drinking a good cup of coffee. In the past, Ray might have fixated fully on the feeling that the world is crumbling around him, that his own body is failing him, that evil prevails. But in these simple moments, he allows himself time to breathe, to rest.

"That's how I imagine feeling when the world's done, or you're done with the world, one way or another," Ray says. "It's basically a weird, mundane nice thing. That moment is all that matters"

In a way honeybee table at the butterfly feast feels like the culmination of the work that Ray has been putting out under the Teen Suicide name for over a decade now. Since early recordings like 2011's jagged-edged collection Bad Vibes Forever, he and a rotating cast of collaborators have made songs that scratch at an existential itch, struggling to explain the Hows and Whys of Life -- if there even are any. They've rarely ever come up with definitive answers -- even on lovingly realized and complexly arranged statements like 2015's It's the Big Joyous Celebration, Let's Stir the Honeypot, or their 2018 album as American Pleasure Club a whole fucking lifetime of this. But that's part of the joy of Ray's work, the trying and failing, the desperate straining to come up with reasons why we do any of the stuff we do in our brief time on this planet. No matter the project, Ray makes music that feels honest and urgent. And for good reason: it's been nearly a decade since he told a major music publication that he felt like he could "die at any second."

Even though honeybee table at the butterfly feast offers a more nuanced approach. It's clear as he flits between styles and sounds -- including brittle ballads like "Every Time I Hear Your Name Called" and murky instrumental excursions like "All of Us Steadily Dying" -- that he's still thinking about the same questions, like whether anything means anything at all. "You can give a really big tip to whoever makes your coffee because the money doesn't matter, you know?" he muses. "And the world doesn't matter. I've come to this weird blase acceptance."

For the first time, he seems comfortable with the answers he comes to. On songs like "Coyote (2015-2021)," -- an expansive, recursive experimental piece that culminates in a brief, breathy guitar ballad that touches on dub production, Talk Talk, and Yo La Tengo's most delicate work along the way -- he sounds content for once.

Perhaps that's because he's, once again, in the comforting embrace of friends like Sean Mercer (who helped produce and record the track), Spencer Radcliffe (who played additional instruments), and Max Kuzmyak (who performed the lead horns). But more likely, the feeling of fulfillment just results from new perspective -- as well as the passage of time, since Ray first started working on the track nearly six years ago. "I wrote 'Coyote,' when we were driving through Ohio, or one of those big open nothingness states," Ray says. With an unchanging landscape, slowly rolling past him, he fixated on the magic in mundanity. "The same simple, beautiful meaningless moments accrue meaning through repetition," he says.

Forgetting yourself, forgetting the world, you start to float on. It's a feeling he's learned to cling to, and hopes to share with others. If you give yourself over to it, he says, "you fall out of time."