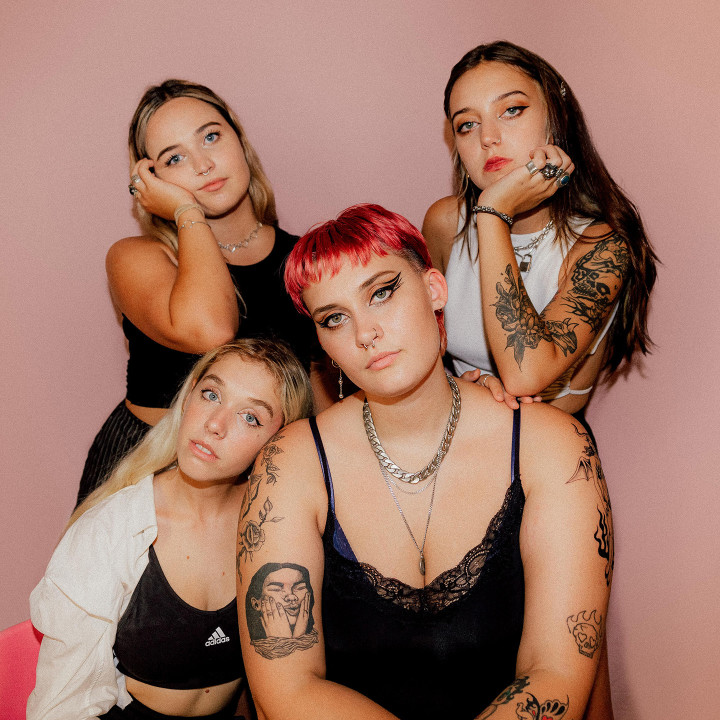 The opening of 2022 has been a monumental resume-builder for Teen Jesus and the Jean Teasers; selling out a headliner at the famed Corner Hotel, invitations to some of the country's biggest festivals and landing in triple j's Hottest 200 with the cracking 'AHHHH!' being just the beginning.

With these career wins and a few more birthdays under each of the Teenie Jeanies' belts comes a collective sense of self-assuredness for Anna, Scarlett, Jaida and Neve. It's a resolve not born of ego or entitlement, but of the coming-of-age they've experienced and a healthy confidence in the work they have put in to get where they are. But, as their upcoming EP Pretty Good For A Girl Band will attest, it's come in the face of being undeservedly underestimated.

From comments of "you're the best chick band I've seen" and "do you need help with your amp, darl?" to unsolicited waist-grabs, PGFAGB speaks to the sentiments that underpin the non-male experience both inside the music industry and outside.

"We are almost wanting to reclaim the phrase. It's always been said to us in such a back-handed compliment sort of way...but we think 'what the hell? Being a girl band is not a genre,'" says vocalist Anna. "It [the title] is almost pushing it back in their face and saying 'yeah, we're pretty good for a girl band and you know what? We're also just a good band.'"

Announced alongside the searing single 'Girl Sports' (in honour of the male dentist that told Jaida she should stick to "girl sports" after knocking her teeth out skating), PGFAGB is Teen Jesus proclaiming they are a force to be reckoned with no matter their gender identity.

But taken as a whole, the EP package is less about the group spitting pure frustration, and more about holding up a mirror and sparking reflection and constructive conversation.

"Despite the fact that we yell 'fuck off' a lot in 'Girl Sports,' it's not that we hate every man ever. It's shit that this stuff happens to us, but we know where we stand and won't let it get to us," shares Anna. "It's also a broader educational moment because it's not only men that have said "you're pretty good for a girl band" to me. I've had so many girls come up to me and say that or 'I love this whole girl band thing you've got going on.' I'd like to think this EP can show anyone, 'hey, if you've maybe ever said this or thought this, then we can all change together.'"

Alongside 'Girl Sports' comes previously released bangers 'AHHHH!' and 'Miss Your Birthday,' the edgy 'Up To Summit' and the raw and self-confessional closer 'Bull Dragon.' Overall, PGFAGB is stick-in-your-head rock lathered in doses of grunge, punk and pop that features an impressive list of collaborators behind it including production from Alex Lahey and engineering from Bonnie Knight (Amyl & The Sniffers, Poppongene) on the tracks 'Girl Sports' and 'Bull Dragon.'

"We used to get so stressed about the details of what genre we wanted to be... we'd flip between wanting to knock off Nirvana to suddenly thinking we needed to be indie-pop like The Jungle Giants and stick to one thing," shares guitarist Scarlett of the band's journey with their sound. "Now we are at the stage where we don't get caught up in those details, we aren't worried about anyone's expectations of us."

Embodying a quiet confidence and resolve like never before, PGFAGB is a powerful documentation of Teen Jesus figuring out who they are and voicing what they stand for. It's the result of a band refusing to meet anyone's projection of who they should be, how they should sound, and what they should say -- and that especially goes for sexist dentists.