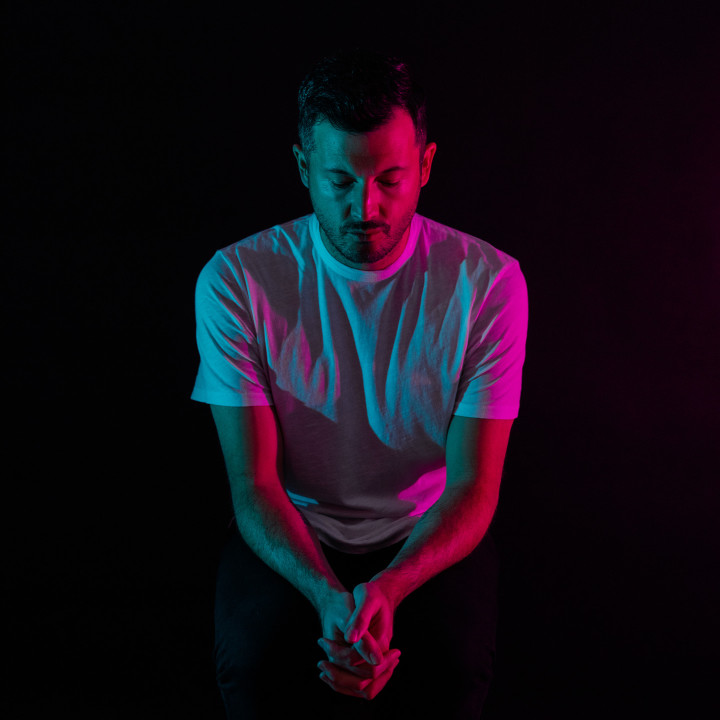 Grief can be messy, painful, and dark, a brutal process that rarely offers straight through its shadows for those mourning the death of a loved one. But for Brian Fennell, the writer, producer and multi-instrumentalist behind SYML, he found comfort not only by leaning into his grief, but writing through it.

DIM, his latest EP out March 5, is a "loss exploration" for him, a potent meditation that manages to make even the most personal tragedies feel intimate and universally understood. Fennell -- who released SYML's self-titled album in 2019, which his breakthrough single, "Where's My Love" -- was on the road with Dermot Kennedy in the spring of 2020 and had plans to spend most of the year on tour, but those were abruptly halted due to the merciless spread of the coronavirus pandemic. At his home in Seattle, he revisited some of the lyrical sketches and compositions he had been working through in the preceding months, all interpreting loss in different manifestations. "True," a captivating R&B groove, ruminates on a disintegrating relationship, while the haunting title track was inspired by survivor's guilt. His father's health was declining after a long battle with cancer at that point, and "Stay Close," the first track on DIM, brims with raw, desperate emotion as he literally pleads for more time while examining his own bond with his children ("One lifetime is never enough / You're more than my heart, you're my blood").

"This EP is largely about losing those close to us," he says. "Calling it DIM really applies to the light we carry during our time here. When those lights go out, it's this sort of dimming process, but rather than living in that sadness -- even though I think that's a really healthy thing to do, to stay in that cozy, warm blanket sadness sometimes -- it's about honoring what that light was, and realizing that there's still that same light in all of us that are still here."

In the following conversation about DIM, Fennell digs deeper into the inspirations that shaped these songs, the growth this EP represents and why he considers it to be one of most fulfilling projects of his career to date.

DIM's title track is lovely but haunting, and the words -- "kiss me goodbye in the morning/I'm with you, always" -- speak directly to these themes of love and loss you kept returning to while you were working on these tracks. Was this the toughest song to write on the EP?

I started writing "DIM" about two years ago. I was flying over Iceland on Icelandair, and I remember Olafur Arnalds did this really beautiful documentary where he collaborated in different places in Iceland with Icelandic artists. One of them was with Nanna Bryndís Hilmarsdóttir, the singer from Of Monsters And Men, and it's in this lighthouse. It's the most moving performance. I was like, "I want to put myself in that lighthouse and write a song in there!" I started "DIM" right after that, and it sat because I really didn't know what it was about until I showed it to a friend, who was like, "I love this -- I think you really need to tell me the story." The story turned out to be this car crash happening, and basically relating it to something that wasn't your fault, and you couldn't do anything to prepare any better for it -- you just took the natural safety precautions that we all know. But then when something actually happens to you, it's not specifically about survivor's guilt: how do you reconcile something happening to somebody else and not you, even though you were with them? That's where I chose to tie it in more to honoring that light that was, and still is. It was only after a close friend almost challenged me to revisit the song that it really came together.

You've explored familiar relationships in your songwriting before: your son and daughter inspired songs on your self-titled album, and you've written about what fatherhood means to you. In what ways did you expand upon that with DIM? Did these songs go in the same trajectory, or did you bring these songs to a new place?

Where those songs started, it was more like, "Oh my gosh, you're here now! What do I do with you? What does that show me about myself now that you're in my life?" These songs, it's a new level: it's not about my kids, but it's about family members and friends who are like, "You're not here," or "You're leaving, and I can't do anything about it -- now what do I do?" A lot of times before, I got through this exercise of imagining the worst so that I can start to digest it. Maybe it's a self-defense mechanism on some level; it's mostly just this creative process. Now that it's actually happening to me, it's a different reckoning as a writer, because it's always a challenge. I wrote "Girl" for my daughter after she went through this life-threatening surgery, and that was a literal thing: I can imagine it, talk to her about it, put this sort of bow on it in terms of its concept. There's a line in "Stay Close:" "I've lost my faith, but I know that it's too soon for your life to end." I don't have this trust in an all-knowing being anymore. Being able to let go of that, and instead embrace the cold void of space in the universe, and this earth, and our time here, that's been a crazy thing as a father, but also as an artist. That song about my daughter was about that experience for her, and even though it was specific to me and this one experience I was going through, it could be about something totally different to another listener, which I think is the magic of releasing songs into the world. I'm interested to know how people will take them and make them their own.

DIM marks the first time you brought collaborators into the SYML equation on the production side: you worked closely with producer Paul Meany (known for his work with Twenty One Pilots) and mixer Joe Visciano (SZA, Earl Sweatshirt, etc.). What did they bring out in you, creatively, that felt new, or offered a new perspective on your own process?

Collaboration, especially remotely, can bring out a lot of surprising things. Mostly, I think it takes a foundation of trust that when you hand over your art to someone else, and they break it apart and put it back together, you believe it will be better. I instantly had that with Paul. Having been a fan of his for the past few years, I already trusted his ears and creative mind. One of the reasons I don't collaborate much is because I consider songs and production to be quite personal. On top of that, it can be almost offensive as an artist to think that someone else could make what you do better than you working alone. Thankfully, people like Paul and Joe act as mirrors instead of wrecking balls: they showed me different angles of my songs and creative process that have ultimately made each better. When you find people like that to collaborate with, it's a feeling of equal parts excitement and humility.

For people who were introduced to you through "Where Is My Love," what is it that people take away from DIM about you as a writer or performer?

"Where Is Your Love" and my early songs are really sparse, and that's not how we're used to hearing pop music, or accessible music -- accessible is probably the better word. With this EP, there are moments where, for me, I was able to push some limits in terms of the electronic side of the production and how that might affect the songwriting. I don't think that for every song on this record, I could just sit down with a guitar and like, move a room. I think it really is more reliant on the production intertwined into the songwriting, and it was fun to flex different [creative] muscles in that way. But then you have a song like "Stay Close," which to me, is one of the poppier songs I've ever written. Picking these five songs to go together was really intentional in terms of the universe of songs in my life right now, because they were able to all fit under that darker electronic side of SYML as a project, and got comfy kind of right away, which was nice.

Why did you want to kick off the EP with "Stay Close"?

It's definitely the song that, if you have heard me before, it'll be the most instantly accessible and powerful. It's also the song that, if you took away all the music and you read the lyrics, it's super gutting! I like the idea of it being a little bit of a Trojan Horse entry into the EP. If you hit them over the head with instant sad, then it sets the tone in the wrong way. I don't know if it's wrong or right, but it's not what I wanted to do with [these songs].

You've mentioned you've experienced some loss, and that this has been tough to navigate while working through what the EP is about. Did DIM give you the catharsis you were looking for?

Yes. It's interesting, because this EP is going to come out while I'm still very much dealing with some of this stuff. I think that's okay. I think this is like therapy for me. I have healthy relationships in my life, but being able to write songs that are brutally honest is amazing, cathartic therapy, because I can sort of wear different hats, and not necessarily play different people, but say things more comfortably when they're in a different setting. That's only helpful for me because, as a personal challenge, I can't just stop there -- it has to be something I'm continually working on. I can't just be like, "Well, solved that in a song, I no longer have to worry about that personally!"

Your name, SYML, means simplicity. In what ways were you able to redefine simplicity for SYML with DIM?

Usually, I'm having to take something that's uber-simple that's a minute and a half and turn it into more, so it's a bit more of a traditionally digestible song length or melodic thought. With DIM, all of the songs started really long. I think there were some literal simplicity exercises I had to go through -- "take away words, you're trying to do too much musically!" -- and that goes to some of the collaborators I've been able to work with, who just do things differently than me. What's awesome is that, once you share it with somebody you trust, and they show you something back, you see a totally different reflection of the work you just did. That was a really good simplicity exercise: I've said or done too much, and that's not always the case with me, so that was a different approach to simplicity.