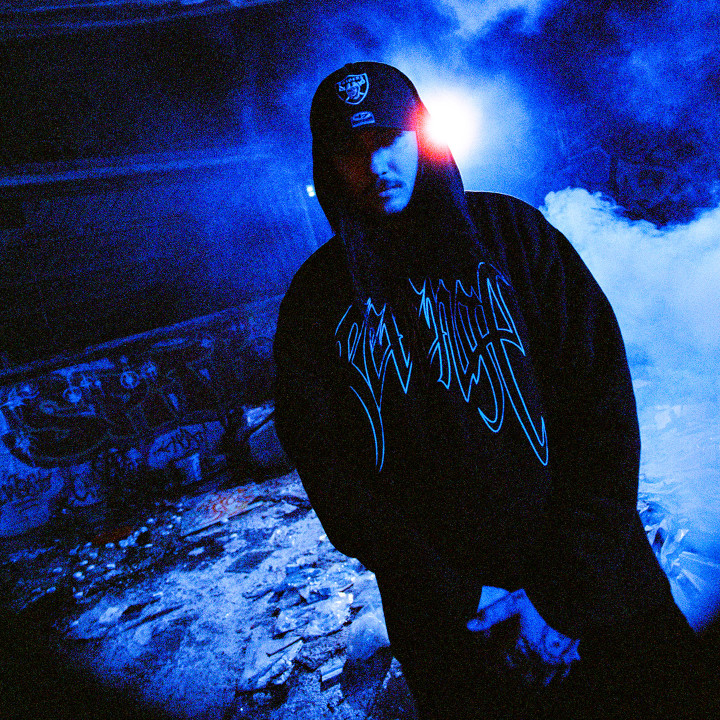 While his identity has been shrouded in mystery since emerging in 2018, cult-favourite phonk rapper Sxmpra is an enigmatic force in the underground rap world letting his music speak forcefully for him.

Born in Hamilton and currently based in Wellington, New Zealand, SXMPRA's childhood was spent constantly moving between small-town New Zealand cities and Australia, but the one thing that remained steady for the artist throughout his formative years was the internet allowing him unlimited access to the underground rap and nu-metal worlds that would later inform his artistry today as Sxmpra.

Growing up, Sxmpra was raised on rock and metal passed down from his parents, as well as his own discovery of Eminem in his early years, before finding then-underground rappers including Odd Future and Denzel Curry in his teens, before working his way backwards to pivotal 90's acts like Three Six Mafia who have helped pioneer the new generation phonk sound of today's generation with their gritty Memphis sound. Today, he counts artists including XXXtentacion, Suicideboys, and Pouya as integral acts who have shaped the sound he's been refining since 2018; intertwining the energetic expression of both his respective backgrounds in rap and rock to create a crossover of sinister trap metal, gritty horrorcore, and distorted phonk music.

Beginning his journey on the DIY rap breeding ground that is Soundcloud, Sxmpra began making music in 2018 using an XBox headset to record songs onto free audio recording software Audacity via a Macbook he financed on a payment plan. Starting out sourcing production via Youtube "type beats," he describes his early music at the time as "an extension of the artists that I was listening to who weren't releasing enough music." SXMPRA's early music was made with the intention to fill the gap he felt was missing as a fan, and eventually one of his Soundcloud tracks (insert name) was commented on and shared by American rapper (insert name), who asked him to collaborate, and in turn opened the door for Sxmpra to break out into the international market.

While he's currently the fastest streaming rapper in New Zealand, Sxmpra never saw himself pursuing music as a career, and instead was pursuing a career in film after studying the creative medium at university. While his priorities have changed in recent years, Sxmpra background in the visual world is deeply integrated into his art as a rapper, giving him a strong foundation of creative control with his own music videos while applying the dark, eerie, and ominous elements of old horror movies like Rob Zombie's Halloween into his own gothic aesthetics.

After embarking on his first trip to the United States earlier this year where he was able to link up with friends, collaborators, and personal heroes including Miami underground rapper Pouya, Sxmpra is focused on connecting with his fan base outside of New Zealand as he continues to work towards his debut full length project via 10k Projects. Sxmpra's stage name references the Harry Potter spell "sectumsempra," "sectum" being a Latin verb translating as "severed," while "sempra" is derived from the Latin word "semper," which means "continuously." Like his moniker implies, Sxmpra music is a razor-sharp, swift strike of underground hip-hop set to hex and haunt the world.