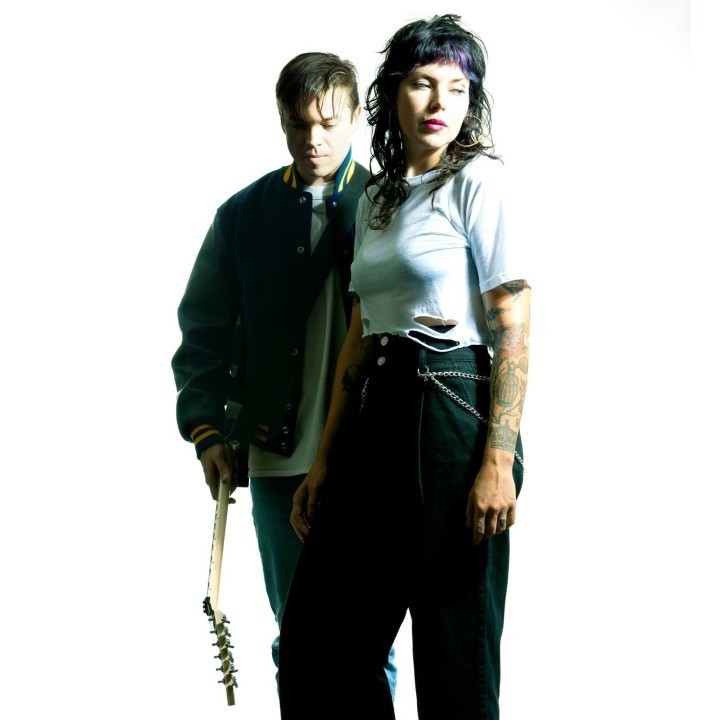 Sleigh Bells’ sixth album Texis is the sound of the duo letting go of hang-ups and inhibitions and allowing themselves to embrace the sort of loud, colorful, genre-melting music only they could make. “We stopped worrying about whether or not we’re in or out of our comfort zone, or if we were being repetitive or formulaic,” says guitarist and composer Derek Miller. After pushing themselves to sound less obviously “Sleigh Bells” on their 2017 EP Kid Kruschev, he found he’d started to reject a lot of his best creative impulses. “In the past we were pretty obsessed with tearing up the rule book and starting from scratch for every record as a means to do something new or different,” he says. “For Texis we didn’t worry about any of that stuff, we just pushed the first domino and hoped that something exciting and inspiring would happen.”

The first domino was pushed in late 2018 when Miller sent an early demo of the track that would become “Justine Go Genesis” to Sleigh Bells singer and co-writer Alexis Krauss, feeling excited about its ultra-fast tempo but slightly self-conscious about his cartoonish, over-the-top metal riff. “It was just this kinda dumb riff, I thought there’s no way it’s making it into a song,” says Miller. “I was really overthinking it.” Krauss clicked with the music right away and wrote her bright, unabashedly poppy melody within a few hours of receiving the track, resulting in a song that sounds like the unexpected intersection of Metallica, Spice Girls, and ‘90s drum and bass. “‘Justine’ to me felt like a real shift, something that was going to define the new direction,” says Krauss. “It just had an aesthetic that was really fun, I knew I wanted more like this.”

The wild maximalism of “Justine Go Genesis” opened the floodgates for the songs to come, like the exuberant cheerleader metal of “Locust Laced” and “Tennessee Tips,” which whips dramatically between thrash riffs and spacey shoegaze sections. Miller and Krauss didn’t go “back to basics” by emulating the sound of their landmark debut Treats, but they did reconnect with that record’s brash, speaker-rattling energy. The result is an album that’s the most fully actualized version of the band, merging the more refined pop craft and deeper emotional palette of their 2016 album Jessica Rabbit with the dopamine-blasting bangers of their earlier days.

Sleigh Bells’ songwriting process is somewhat unusual – Miller composes all the music on his own, building tracks mainly with guitars, keyboards, and drum machines. Krauss writes topline melodies for the tracks using lyrics written by Miller, bending phrases pulled from documents he sends her into proper melodic hooks. “The nature of Derek’s lyrics are pretty dark, so I don’t want to make it sound insincere if it’s too feel-good and anthemic,” says Krauss. “Part of why I’ve always been attracted to his music is I could put distance between my actual self and who I am in the band, I’ve always felt like that’s a comfortable space for me.”

The creation of Texis was slowed down when the duo arrived in Los Angeles to mix their tracks in early March of 2020 but had to turn around and head back to New York when the pandemic lockdowns began a couple days into their studio time. The band made the most of being forced into hiatus, with Miller and Krauss crafting two more songs for the record in the downtime – “An Acre Lost” and “Knowing,” and Miller taking the opportunity to focus on his health. “It was a sobering moment, literally and figuratively,” he says, “but I was looking at the bigger picture. I was thinking about my mom, I was worried for her, and in the macro view it was just obvious that there was going to be a lot of tragedy soon.”

“I didn’t have an immediate loved one die and I could keep a roof over my head, but my mom’s a health care worker so I was worried for her and I had to postpone my wedding twice,” Krauss says. The bright side of the band hiatus was that she could devote more of her time to her role as an outdoor educator and climbing guide for Young Women Who Crush, a rock climbing and leadership development program Krauss co-founded that serves young women and gender expansive youth from New York City public schools. “When Derek and I met, I was a teacher just finishing my first year, and it was bittersweet to leave teaching,” she says. “I really love working with kids, and with climbing I could work out how to teach and be involved with kids without having to be in a classroom.”

Miller and Krauss’ close friendship and very different lifestyles factor into the music and lyrics on Texis, most notably the opener “SWEET75,” which is framed as a tough love message directed at Miller via Krauss. “It’s an imaginary conversation, sorta like what we did on ‘Comeback Kid,’” says Miller. “It’s about how self destructive people deflect a lot, and when Alexis says that I’m ‘rock and roll,’ it’s sarcastic, it’s a euphemism for self-sabotage.” “There are times when Derek will tell me a line is my perspective in the song, and there are things he hasn’t told me in conversation but he’ll tell me in lyrics,” says Krauss. “There’s a lot of vulnerability in his writing and I give him a lot of credit for that.”

The power ballad “True Seekers,” which arrives near the end of the record, was the longest gestating track, and one which benefited greatly from the band shedding their neuroses about what they could or couldn’t do. “We worked on that song many years ago, it was a totally different thing then but that’s when I wrote the chorus,” says Krauss. “We were worried it wasn’t really a Sleigh Bells song, but it was always something I’d want to listen to, and when I sing it I feel it in a really deep way. I want to put it on loud and maybe cry or laugh.”

One of the band’s goals in writing Texis was to infuse even the most abrasive and full-blast songs with something that made the music feel “nourishing” to them. “The thing I’m most attracted to is the juxtaposition of happy and sad, melancholy and hope,” says Miller. “A lot of this is about trying to hold on to a shred of optimism through sheer force of will, and I hope this music can give people some joyful energy and confidence.”