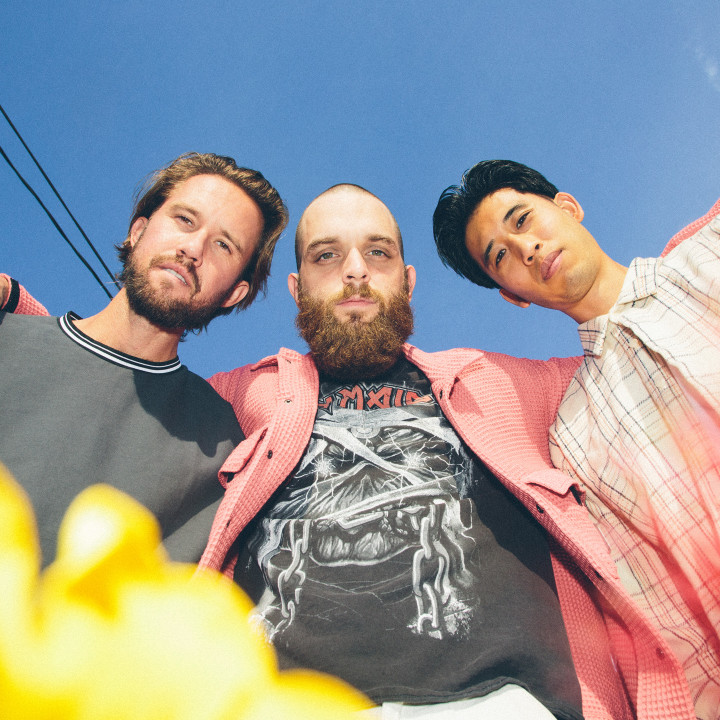 On their new album The Rise and Fall of Loverboy, Sir Sly document a period of intense transformation for frontman Landon Jacobs, a journey from self-destruction to radical self-discovery. Brought to beautifully strange life with his fellow multi-instrumentalists Hayden Coplen and Jason Suwito, the Southern California trio's third full-length offers a real-time portrait of near-catastrophic despair and the gradual reclaiming of purpose and hope, ultimately providing listeners with profound inspiration for navigating darkness with both courage and clarity.

Jacobs's own path toward recovery began just over a year after the release of Sir Sly's sophomore effort Don't You Worry, Honey, a 2017 album featuring the hit singles "&Run" and "High" (which reached #1 and #3 on the Alternative Radio chart, respectively, and helped boost Sir Sly's total streams to more than 350 million worldwide). While Don't You Worry, Honey was written in the aftermath of Jacobs's divorce and his mother's death, he soon found himself facing a whole new set of personal challenges. "I'd been drinking every day for maybe five years, and it had ramped up to the point where my brain wasn't working the way I wanted it to," says Jacobs. "I was becoming increasingly depressed and suicidal, and I really couldn't manage my own life anymore."

In October 2018, in the throes of creating the band's new record, Jacobs decided to get sober. Along with returning to therapy for the first time in a decade, and directly addressing the mental-health issues he'd long self-medicated with drinking, he took up transcendental meditation and immersed himself in rigorous self-examination. "I wanted to figure out how to make life feel meaningful again, and rediscover the sense of purpose I'd lost when I lost my faith in my early 20s," says Jacobs, who was raised as an evangelical Christian. "That whole shift in perspective made a huge difference in finishing the record, and finding a new way of writing about my life."

In the album's layered reflection on life's most essential questions -- love and loss, control and chaos, anxiety and existential dread -- Jacobs drew straight from the diary-like yet poetic observations he'd recorded throughout his recovery. "Every song I write starts out as a private journal entry," he says. "And because I've conditioned myself to write songs so consistently, I can't help but process things in rhymes." As a fitting counterpart to its often-dreamlike lyrics -- an element partly inspired by Jacobs's extensive reading of Japanese surrealist Haruki Murakami -- The Rise and Fall of Loverboy unfolds with an elegantly shapeshifting sound, embedded with flashes of folk and psychedelia and even left-field hip-hop. The resulting body of work expands on the potent originality of Don't You Worry, Honey, all while harnessing the frenetic energy of the live performance Sir Sly have now brought to every major U.S. festival, including Coachella, Lollapalooza, and Bonnaroo.

With its playful homage to David Bowie, the title to The Rise and Fall of Loverboy references one of the album's most effusive tracks, an electro-glam anthem whose protagonist serves as a proxy for Jacobs's most damaging impulses. "I'd gotten into a new relationship, and 'Loverboy' was the first love song I'd written in a long, long time," says Jacobs. "It's me saying, 'I'm feeling extraordinarily broken, and this relationship is the thing that will fix me.' As we were finishing up the album, I realized the toxicity of the idea that something outside myself could ever solve all my problems. And if there's a narrative to the record, it's about looking for that outside help for most of my life, then eventually overcoming that way of thinking in order to build a healthier mindset."

An album propelled by unflinching self-awareness, The Rise and Fall of Loverboy looks to matters of spirituality on songs like "Material Boy," a luminous piece of synth-pop laced with brilliantly cheeky lyrics (e.g., "This is a spiritual world/I'm a material boy"). "As I was getting sober I had the revelation that I'd made the mistake of conflating religion and spirituality, and really thrown out all sense of a spiritual identity in losing my religion," says Jacobs. "I'd sunk very deeply into a nihilistic worldview, and there was this huge spiritual deficit in my life. Now I know that what spirituality means to me is being okay with not being in control, and living life much more in the moment."

On "Are We Having Fun," Sir Sly perform a sort of wicked alchemy, setting Jacobs's vivid detailing of his past transgressions to a sing-song melody and shimmering sonic backdrop. "That song was born out of looking back at my compulsive drinking and wondering what it would be like to see it from the outside," says Jacobs. "It's partly lamenting not being able to remember the specifics of what were probably amazing nights in my life, but it's also asking everyone, 'How much fun are we really having if we're not going to remember most of it tomorrow?'"

One of the album's most unsettling moments, "sic sick [sic]" finds Sir Sly pushing into the most thrillingly odd reaches of their musical imagination. With its jittery rhythms and warped vocal work, the song emerges as the shadowy flipside to the wildly unchecked romanticism of "Loverboy." "'sic sick [sic]' is me trying to make sense of a breakup, and a situation where I wanted something to fix me so badly that I destroyed it from the inside out," says Jacobs. "I started with this line about returning her coffee cup and knowing it was the last time I'd ever see her, and I ended up writing three pages of lyrics about this codependent relationship coming to an end."

Although much of The Rise and Fall of Loverboy embodies a moody urgency, the album slips into a far brighter tone on "If The World Ends," a sweetly lilting track sparked from a moment of goofy spontaneity. "I started writing that one after a completely failed day of songwriting for our second album -- I just picked up an acoustic guitar and jokingly sang that first line: 'If the world ends, I'm a piece of shit/I couldn't do my job, I couldn't write a hit,'" Jacobs recalls. And while "If The World Ends" speaks to very real fears and insecurities, it also marks a certain breakthrough in Jacobs's songwriting approach. "I feel like I've been able to bring more nuance to my writing than I've done in the past," he says. "Instead of being consistently mopey and then using the music as a way to add levity, I've been able to bring that levity into the lyrics as well."

Like every Sir Sly release since their 2014 debut You Haunt Me, The Rise and Fall of Loverboy was self-produced and recorded in Suwito's Costa Mesa studio, a self-built facility named Noise Coalition. In shaping the album's dynamic sound, the band made abundant use of Suwito's stash of newly acquired synths and pedals and drum machines, as well as a redesigned layout even more conducive to free-flowing creativity. "We gave ourselves more time per song on this album and got hyper-fixated on the individual sounds, with a goal of making sure that everything moves and breathes in a very natural way," says Jacobs. "That was a great revelation for us: to enjoy the process more, and give the music space to explore a bit." For Sir Sly, the entirely self-directed nature of the recording process goes hand-in-hand with their uncompromising commitment to overseeing all facets of their creative output, including cover art and videos. Not only an extension of their sharply honed vision, that deep dedication echoes the pure joy they find in creativity. "We're the luckiest people in the world for getting to do what we do, and we just want to do more and more of it," says Jacobs.

As Jacobs reveals, the making of The Rise and Fall of Loverboy served as something of a lifeline as he worked his way toward health and sobriety. And in sharing the album with the world, Sir Sly hope that it might have a similarly restorative impact on their audience. "For a long time I thought that everybody who's happy is fake, and everybody who's hopeful is lying to themselves -- and now I realize that's just about the shittiest thing you can believe," says Jacobs. "So instead of feeding into a system that touts those sorts of ideas, I want to be a voice of positivity. And I've always said that I want our music to help people feel less alone, but now I want them to take that one step further and actively seek connection with other people. Because even though the idea of opening up to someone else can seem really scary, in the end I think it's the most valuable thing you could do."