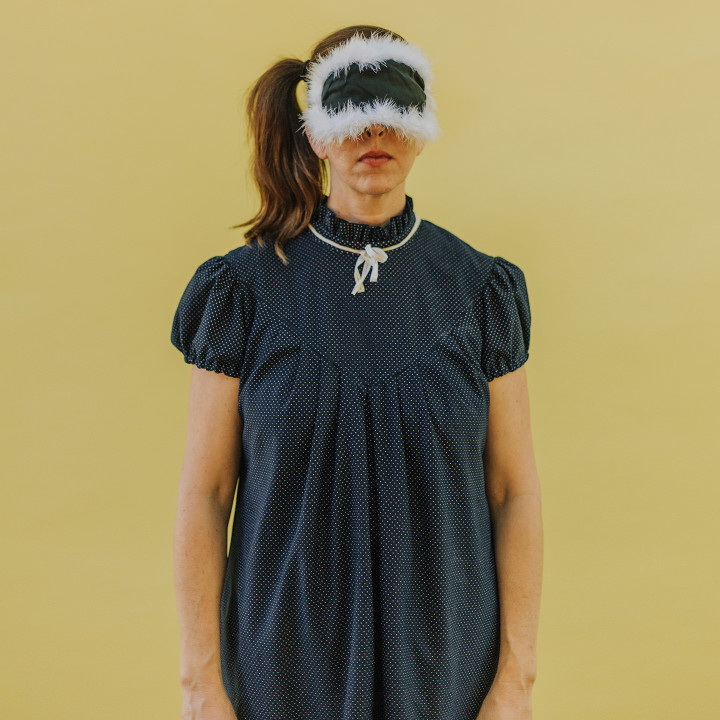 IT'S NEVER BEEN ENOUGH FOR ROSIE THOMAS.

Not in shallow terms of success or fame, but in her own deeper personal sense of making the most of her life, what she has to offer, and what she wants to lend. Years of following the same well-worn formula of releasing albums (through Sub Pop, Nettwerk, and her own SINGALONG imprint), doing interviews, and going on tour to play those same songs again increasingly left her unsatisfied, bored, and yearning for more.

So, she began throwing wrenches in the works to see what might shake loose. She first tried opening her own somber, emotionally serious concerts disguised as an unannounced, awkward, neck-braced, coke-bottle-bespeckled comedian named Sheila Saputo, but over time as people became wise to the "alter ego" identity, and the Kaufman-Clifton mystery faded, so did her interest in keeping it up. And while Rosie has always enjoyed making people laugh, dabbling in stand up, opening for Mitch Hedberg, acting opposite Steve Zahn, performing on the UCB stage, or making zany videos to promote a Sufjan Christmas album, she quickly found comedy alone didn't allow for the earnest emotional connection she began to desire most of all.

As her years of self-work and personal growth took her from a 20-something with a lot of questions to a more seasoned, more confident grown-up with more to actually lend, she found she had much more desire to talk with people at shows than just sing -- thinking, "You can listen to these songs at home. We're together now. Let's go further!" But creating an extended break in the set to talk to the crowd, or a handful of one-on-ones after at the merch table just didn't cut it either.

Once relocated to NYC, a place where career is pretty much everyone's sole focus, she wound up spending most of her time in between tours having people over to listen to them, and encourage them in whatever they were going through. But it didn't stop with friends and acquaintances. When she did phone interviews, she'd spend an hour of a scheduled 30 min call talking about the interviewer's life, asking them questions, and building them up without even discussing her new album. What an eavesdropper might assume to be a heart-to-heart phone call with an old dear friend would turn on a dime to a billing question, revealing she had been going deep with a random customer service agent the whole time. People at parties, clerks at stores, strangers on the street; it didn't matter. Rosie had to talk to people. Not just talk, but really connect on a meaningful level, and not waste any time. She wants to find common ground; she wants people to feel understood, to feel less alone, to feel encouraged, and to feel comforted. Even as you read this, she's bummed somewhere that she can't ask you questions, and see how you're doing. How you're really doing.

Rosie has always pulled on heart strings, always made people laugh, always entertained, and always made a unique impact on others -- in a way that only she could. Renowned publicist Carla Sacks once said that Rosie had "one of the most singular voices" she had encountered, and yet Thomas was still searching for how to incorporate all these parts of herself in just the right way.

Having tried a few tours singing in other people's bands (Iron & Wine, Sufjan Stevens) and one more solo tour of her last record, Rosie was pretty over it all, and it was clear she needed a change, new inspiration, and a new direction.

Though not necessarily the change she had in mind, change most certainly came. She got pregnant, had a baby, left NY, and got busy being a parent. Then she had another one, and got busier still. This continued until she and her husband and creative partner, Jeff Shoop, were outnumbered, and then the inspiration fell into their laps... Or out of her lap, I guess?

Having been a purveyor of some admittedly sleepy music, it initially seemed an obvious time to make a lullaby album for kids. But as the newly overwhelmed and under-slept mother began writing, she soon realized the songs coming out were ultimately to comfort and soothe herself -- the parent. As she'd always done before, Rosie wrote about what was in front of her, processing what she was going through, and what she needed to hear -- and so parents themselves became the focus. She figured parents are the ones that need the soothing after all. Help the parents first, so that they can help their own kids. Like putting on your oxygen mask first, before helping those that need assistance -- ya know... basically.

At that point the inspiration floodgates opened wide, and a clarity of vision that Rosie had long sought began to take shape. Through music, videos, a podcast, essays, books, clothing, on and on, there was no shortage of material. Available time to actually work on it? No, yeah, there was a shortage there. They had lots of little kids, and not lots of help, so the two parents would work comically late into the night, or for a highly concentrated week when they could coax grandparents to town. The work was her most inspired and well crafted, but with so many interruptions, also frustratingly slow, snuck in between playtime, playgrounds, nap times, nursing, diaper changes, and then... the pandemic hit -- slowing the in-house operation even further while increasing the pressure to get it out to the parents who would need it now more than ever.

In a social media age of putting our best foot forward, presenting the impression of having it together, and perpetuating a false facade that others mistake as some unrealistic standard to aspire to, Rosie wants to poop her pants, so everyone knows it's okay if/when they do -- metaphorically or not. That's closer to a realistic portrayal of actual life than the baloney we see every day. We all have hardships, struggles, and insecurities, but we're not sure we're allowed to admit it and show them. But as Rosie often says, "if you don't say it, who will?"

Well, Rosie is here to say it!

She's here to comfort you, to cheer you on, and to remind you It'll Be Alright.