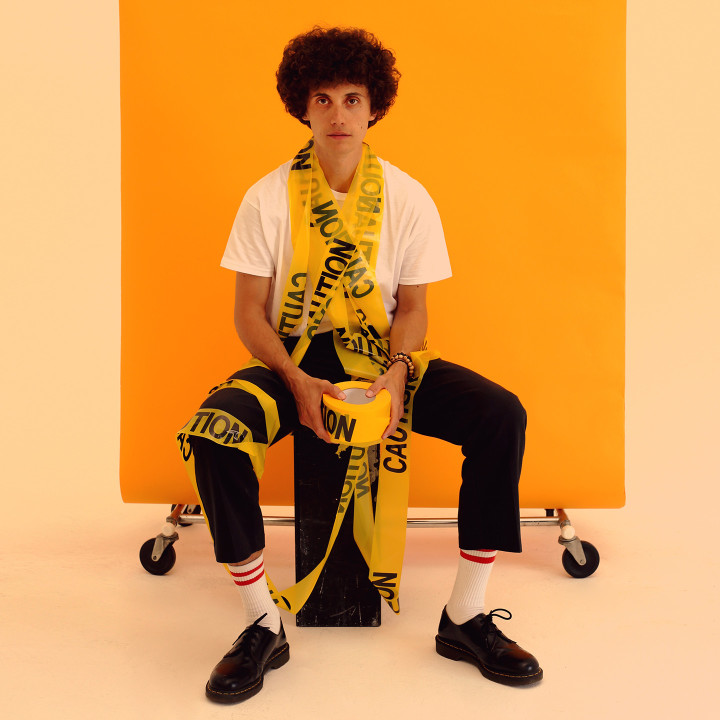 Hi, my name is Ron Gallo, I live on the line between two mindsets:

1. The world is completely fucked
2. The universe is inside you

This is my artist bio. Who has time to read this in 2022? With all that's happening? With these attention spans? I know I am not cool or important -- no one is -- I think it's a good thing. Listen to the music, come to a show, think for yourself. The best compliment I ever received was when someone told me they can never tell when I am serious. My two biggest fears are opposites -- having a child or killing someone. You're probably a little confused or annoyed, but at least you're not asleep. That's kind of my thing. I bet you made it this far. Success!!!

We have all been through a lot. Especially the last few years but also all the years before that. There was never time to collectively stop and question what has been considered "normal" for so long and it turns out nothing really is. These ways of thinking and doing in America were never serving everyone but now they're not serving anyone (except maybe 5 guys that all look identical and own everything). So, I spent an entire record trying to understand what is happening, what's wrong with this place and what's wrong with myself, it's called "FOREGROUND MUSIC" and it's going to come out on legendary label, Kill Rock Stars, on 3/3/23.

If you're new to this, or maybe you heard the name but glazed over at another guy with a guitar (like I would have) I'll sum it up as quickly as possible:

2015, life crumbled in Philadelphia, I became "frustrated with humanity" and it led me to write and record songs that became the first album "HEAVY META." I moved to Nashville for change of scenery with that record on a hard drive and started playing as many shows as possible with whoever was around -- the shows were chaotic, confrontational. It was well-received, or probably strange enough to be intriguing in "MUSIC CITY" so it led to signing with a label, releasing the record in February 2017, touring the world and playing Coachella, Bonnaroo, Governor's Ball, Austin City Limits, Pukkelpop and more. We toured and played shows with Spoon, Parquet Courts, Ty Segall, Courtney Barnett, Hurray for the Riff Raff, Twin Peaks, Caroline Rose, Wilco, The Black Angels, J. Mascis, Post Animal and more. We played the song "Please Yourself" on a truck stopped in the middle of downtown Nashville and got it on film which is now a music video. NPR called the record "a burst of literate electricity" and me "an insurgent poet and rock n' roll disruptor." OK!

It was bizarre to suddenly be doing all this stuff I never thought I would do, so in January 2018 we put out the "Really Nice Guys" EP, a joke concept album and mockumentary film commenting on the absurdities of my newfound role as a professional touring musician. In October 2018 "Stardust Birthday Party" came out -- described by The Guardian as "bringing the fruits of meditation to Gallo's jams -- a little like Bodhisattva Vow marked the influx of MCA's Buddhism into the Beastie Boys." Iggy Pop played and talked about a track from it on his BBC Radio show and that was a life highlight. The initial pandemic period resulted in my "stay-at-home" pop experiment, 2021's "PEACEMEAL."

Now 2022, 50 lifetimes and too much time to think later, I'm full circle, living back in Philly a block from where I made the first record. The neighborhood has become a giant construction site, humanity has too, and I feel similar angst to those early days. I live with my life/musical partner, Chiara D'Anzieri, AKA Santa Chiara, who immigrated from Italy to the U.S. in the beginning of 2020. She plays bass (+ many others instruments) and co-produced "FOREGROUND MUSIC" with me. Having an outsiders perspective on our country and seeing other places has really shown me how fucked up America can be. I strongly suggest getting away from it if you can. Or, if you can't, maybe this album or a show of ours can help you find a way out from within.

​​"FOREGROUND MUSIC," the title of Ron Gallo's 4th LP, and debut for Kill Rock Stars might also be a suitable name for his own genre. In simplest terms it's the opposite of background music -- unavoidable, urgent, in your face -- Gallo's consistent theme is to confront, disrupt and sometimes even confuse people into a sense of awareness. The intention to steer away from apathy and self-empower by focusing on what we can control and make light of in a world designed to take it away. The guitar less an instrument and more of a primal noise machine. This record is a challenge to everything and everyone, including his own self, who is holding back the progress of humanity (especially in America) into a more open, empathetic and collective unit -- the words delivered with a punkish tenacity and lining even the heaviest topics with an ever-present sense of humor. It covers the full spectrum of emotion. This music feels like life feels right now. In his eyes, how could it not?

Clad in caution tape and construction orange color scheme, much like his surrounding neighborhood in Philadelphia where it was written and recorded. Gallo doesn't see now (or ever) as the time to sit back and chill -- this is going to be what we make it. All the visual components to this record were taken in the very brief moments of transition between a place or space going from being one thing to another, a vacant lot to a condo, out with the old in with the new. Everything with this record approached with a sense that there's no time to waste, it could all be gone tomorrow, quite literally.

Over the course of the record traversing between sounds akin to an exploding NYC subway station, oddball dance-punk, noise pop, even the more grave moments would sit well in whatever a modern version of CBGB's 1975 would be -- in 11 songs Gallo shares detailed anecdotes and takes on male entitlement, the age of anxiety, apathy vs. action, gentrification, narcissism, retail therapy, xenophobia, the dread of future generations, right wing extremists in giant pickup trucks, capitalism, climate change and the experience of having a loved-one who is an addict.

If an existential crisis could somehow be fun -- it's this record.