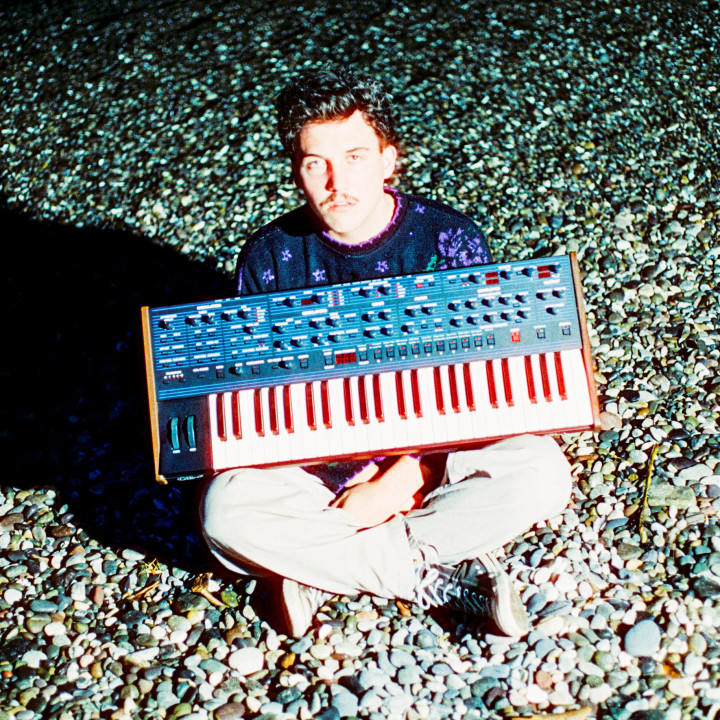 At just twenty-one years old, singer/songwriter Ritt Momney has expertly infused emotion into his sound, crafting introspective records that are therapeutic for the man behind the pen as well as his listeners. The Salt Lake City native has recently gone viral thanks to his cover of Corinne Bailey Rae's "Put Your Records On," gaining steam on TikTok while soaring up the Spotify and Apple charts. As he enters the next phase in his career, Ritt Momney continues to spread messages of romance, realization, and rebellion.

It's much more than a spin on Mitt Romney's name. The artist, born Jack Rutter, knew from a young age that falling in line wasn't going to be a priority. Born in Dallas, Texas, Jack's family moved to Salt Lake City, Utah when he was around two years old. Growing up in a tight knit Mormon community, Jack's musical experience was relegated to the church, The Beatles, and radio hits. That was until he reached high school and stumbled upon James Blake's eponymous debut album, which arguably changed Jack's life.

"It was then that I realized music doesn't have to sound like everything else for it to be good," he admits. He kept searching for more music, diversifying his palate, listening to other artists like Earl Sweatshirt and STRFKR. His older brother was a musician, and Jack wanted to try it. He taught himself the piano and guitar, recording acoustic covers on his phone then posting them on SoundCloud. He graduated to GarageBand and then on over to Logic. "I felt like production was really fun for me," he says. "Why would I limit myself to piano and guitar when I could plug into a computer and have the sound of any instrument I wanted at my fingertips?"

Jack formed the band Ritt Momney in 2017 with some friends, and they released a song called "Young Adult," which gained some traction on Spotify. He then watched his friends all fall in line with the Mormon faith, and once he reached college he started to find some new friends. Eventually, Ritt Momney became just him, and in 2019 he released his solo effort Her And All My Friends. The project was poignant and moody, as Jack grappled with his girlfriend being away at college, his friends joining Mormon missions, and him questioning all of it.

On one of his album tracks "(If) The Book Doesn't Sell," Jack touches on his departure from the Mormon church. He describes: "When I first stopped believing in my church and religion in general, I immediately began looking for everything wrong with it. But when I finally worked up the courage to tell my parents I was atheist and we started talking about it, I realized it shouldn't be about who's right and who's wrong; it should just be about what works. And what works for you won't necessarily work for everyone else. All I'm trying to say with this song is that spirituality should be a personal endeavor."

Ritt Momney was slated to hit the road with Dayglow this spring, but due to COVID the tour got canceled. With newfound time on his hands, Jack recorded a cover of Corinne Bailey Rae's 2006 Grammy-nominated hit "Put Your Records On." The buzz continued to grow once he posted it online, and Ritt Momney immediately gained a level of notoriety Jack hadn't thought possible.

Currently, the newly signed artist to Disruptor / Columbia Records is readying his major label debut album. "I'd describe it as 'lyric-driven indie pop,' I guess," he expresses. The work will build upon the foundation he's already laid, which is honest songwriting mixed with intoxicating melodies. While the artist known as Ritt Momney may be rapidly gaining popularity, he maintains one major goal. "I think the main mission for me is to have fun making music," he says earnestly. "That's the only way I can do it well."