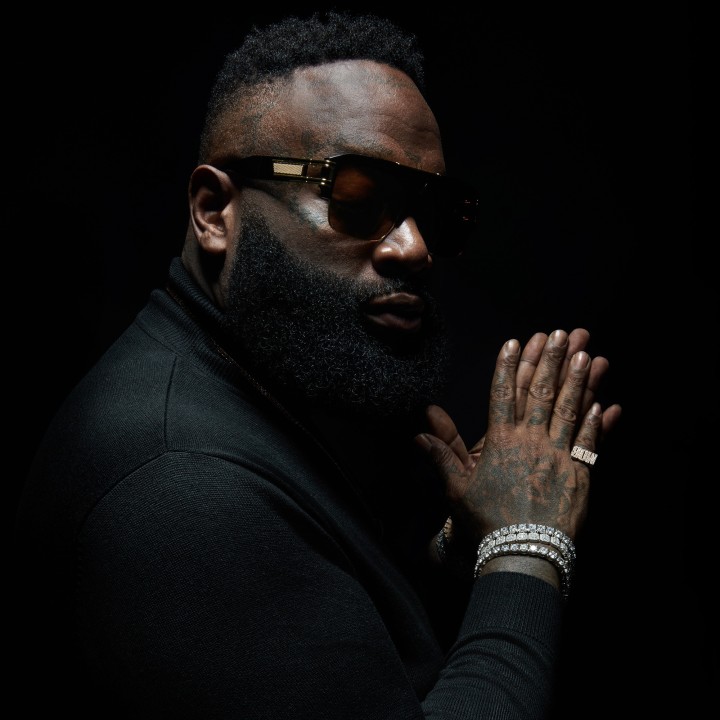 With the levying stature of a goliath and the regal standing of a King, Rick Ross has lived up to his prophecy of being the "Biggest Boss." The Miami Monster Mogul has evolved into not just hip-hop's most respected and revered MC (in fact he was voted MTV's "Hottest MC" of 2011), but as a label CEO and business entrepreneur, his resumé is as sterling as one of his platinum plaques.

God Forgives, I Don't is Ross' fifth solo album in six years, following in the recent success of five star acclaimed masterpieces Deeper Than Rap (2009), Teflon Don (2010) and classic team efforts with his Maybach Music Group, Self Made Vol. 1 and 2. By now, everyone that follows what Ross does, has been conditioned to expect nothing but a prolific output of the highest grade of music.

In a career that reaches new heights every year, God Forgives... is a milestone, the most anticipated rap project of all of 2012, as well as being the LP that will be the definitive work of art of the past decade.

"Without exaggeration, you just don't hear this high of quality or precision of music," Ross says about his opus. "I've mastered the art of devising classic albums, but this by far exceeds my prior excellence. I owe this to the fans and I owe it to myself to be the undeniable best."

God Forgives... has a seamless blend of party hits and street certifiable bangers surrounded by Ross' passionate reflections on life and articulation of his journey to be a billionaire. On one of the lead cuts, "So Sophisticated," Ross hammers down heavy-handed statements with a delivery as graceful as Michael Jackson's penny loafers lighting up the streets in "Billie Jean." Meanwhile "Touch N You" features multi-time Grammy Award winner Usher and caters to the women who have crowned Ricky Rozay as one of the most yearned for sex symbols in all of entertainment.

"Three Kings" feels like Ross' coronation into legend status as he is joined side by side by the man who has garnered the title of Greatest Rapper of All-Time, Jay-Z and the Greatest Producer of All-Time, Dr. Dre.

Like every up and coming MC, Ross -- influenced by Golden Era b-boys that reigned supreme in the late 80s -- just wanted to be heard during his introduction into hip-hop in the late 90s. While the desire and the artistry have been Ross hallmarks from career commencement, he had to learn the fine of art of structuring record contracts as well figure out a way to market and promote himself to the public when his former record labels couldn't.

Ultimately, Rick Ross' time didn't come until over a decade after he started professionally. He only needed one song to break through. 2006's "Hustlin" which went from being a relentless street anthem to a pop culture catch phrase still used today, earned Ross a record deal with Def Jam, and became the catalyst for his debut LP Port of Miami. That album debuted number one on the Billboard charts as did Trilla which came less than two years later.

And while his core fans already were familiar with the superlatives or Rick Ross the artist, in 2009, we got to know how strong of man the music Kingpin was. Highly publicized rap battles and controversy over his street cred that started at the end of 2008, none of it mattered by the spring of the next year when 2009's Deeper Than Rap dropped. The few that ridiculed had no choice but to jump on the bandwagon, when Ross elevated himself with refined raps and musical soundscapes, all the while never worrying about public misperceptions about his past. While other albums may have sold slightly more, 2010's Teflon Don overshadowed every LP from any genre that year. It was the album you heard coming out every car, the album that dominated DJ's playlist and the album that catapulted Ross to international superstardom.

Building on the next level of his fame, Ross' hunger wasn't satiated. He knew it was his golden opportunity expand his Maybach Music Group. In late 2010 MMG went from boutique imprint to a full-fledged label, with the signings of Wale and Meek Mill as the cornerstones of the roster. Stalley and Omarion have since joined his core and have helped make MMG the most beloved brand since Jay-Z had Roc-A-Fella records 10 years ago. In early 2012, Ross released a free mixtape containing an album's worth of new material called Rich Forever. The popularity from the body of work was so fervent, Ross toured in the U.S. and overseas in support of the new set of songs and Rich Forever has since went on to be the most downloaded mixtape ever. Now with God Forgives I Don't, Ross has his sights set on a brand new goal: to be the biggest boss and artist of all-time.

"When my career is done, people will look back at everything I've contributed, and not just speak my name in high regard with the best of the best artists, but they'll also compare my contributions with the greatest executives ever such as Russell Simmons, Lyor Cohen, Clive Davis and Jimmy Iovine."