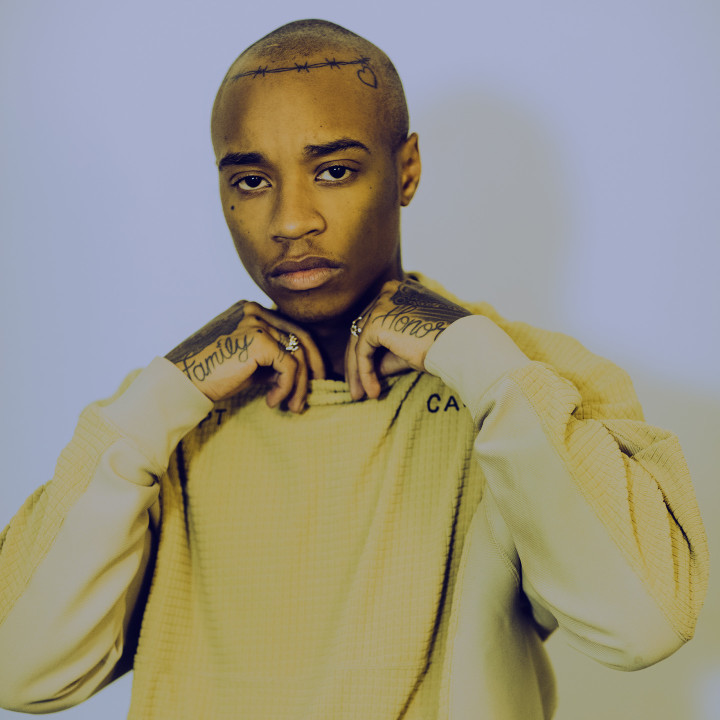 Art allows us to escape without ever really leaving. Movies, books, and records transport us beyond the physical realm to places we may not fully grasp, yet will never forget. Rejjie Snow raps with this in mind. His rhymes wouldn't be out of place in a dusty book of old parables, while the hooks anesthetize like mythical ether. Once his records finish playing, they disappear back into silence as if they were never there at all.

Similar to a film, the space between the opening and closing credits is all that matters...

"I approached it lightheartedly from the point of view of making a short film through music," he explains. "I always loved Willy Wonka & the Chocolate Factory. I watch it all the time. I thought of Baw Baw Black Sheep like a soundtrack to it. I put the movie on with my album, and they synced up perfectly. I tried to tap into all of these feelings. The music is really colorful, and the lyrics are often happy, because that was my state of mind."

In many ways, this album fulfilled his destiny. Hailing from Dublin, he always stood out. Beyond the fact he rapped (which distinguished him enough!), he never quite fit in with his friends and family. "I'm still the one who's a bit goofy and different from everybody else," he affirms. "People always said I was odd, so I turned into the 'Black Sheep.' I use those differences to my advantage though. Things like my ADHD became superpowers, not weaknesses."

Those "superpowers" separated him from the pack right out of the gate. He supported Madonna on tour and broke all the rules with his 2017 project, The Moon & You. A year later, his full-length debut, Dear Annie, yielded genre-disruptive fan favorites such as "Egyptian Luvr," "23," "The Rain," and more. Along the way, he also collaborated with everyone from Clairo to Kaytranada.

To make the album he holed up in Los Angeles and cut Baw Baw Black Sheep with Cam'Obi as Executive Producer. The peace of the moment coursed through the entire body of work.

"I felt very at ease," he says. "There was nothing heavy on my mind. Everything made sense. I've never been that quick with music in the past. It just flowed out of me. I had done a lot of shrooms two months before, so I was prepared for the journey of making Baw Baw Black Sheep. I went out there by myself with no distractions. It was a special time for me. When I made Dear Annie, I was coming out of a relationship, and I didn't know whether or not I wanted to write about it. It was on my mind, because I'm like any other bloke. This time, I went in with nothing. I was in a good space."

He set the stage for the album with "Cookie Chips" [feat. MF DOOM, Cam O'bi]. Within a few months, it received widespread acclaim. HYPEBEAST dubbed it "equal parts psychedelic and chilled," and DAZED described it as a "breezy little ditty from the Irish rapper, one that feels lighter than air."

The single "Mirrors" [feat. Snoh Aalegra & Cam'Obi] pairs sun-soaked production with laidback bars before Snoh turns up with slick and soulful cameo on the chorus.

"It's very nostalgic," he elaborates. "I'm diving into little things that stood out from when I was younger. They're tiny snapshots. I'm trying to paint a story with the lyrics. It's got a happy vibe."

"Vogue" [feat. Tinashe] illustrates the expanse of his dynamic vision and the diversity of the project. Elsewhere, a trap bounce underscores the chilled-out energy of "Relax." Cymbals simmer beneath tense verses and the double entendre-driven hook of "Dear Snow White." On the finale "Shooting Star," a frenetic beat darts across the sky as his vocals soar amidst spacey zips and bleeps.

"Everyone is a star in their own way," he states. "I'm touching on this idea and trying to inspire on the last track."

In the end, Baw Baw Black Sheep might just be the trip we all needed to take.

"I'd love for you to experience this the same way you'd watch a movie," he leaves off. "Hopefully, you're immersed in it. I also want everyone to know -- especially people from my neck of the woods -- that you can do the same thing. It's really crazy what you can make when you're having fun."

Lifting hip-hop up to a psychedelic realm, Rejjie Snow raps in technicolor, painting in broad strokes with hypnotic hooks, artfully crafted bars, and otherworldly production. Igniting his career, he supported Madonna on tour and broke all the rules with his 2017 project, The Moon & You. A year later, his full-length debut, Dear Annie, yielded genre-disruptive fan favorites such as "Egyptian Luvr," "23," "The Rain," and more. Along the way, he also collaborated with everyone from Clairo to Kaytranada. After receiving acclaim from tastemaking publications worldwide, the Ireland-born artist opens up this world on his second full-length offering, Baw Baw Black Sheep [Honeymoon/+1 Records/EMPIRE], boasting the singles "Cookie Chips" [feat. MF DOOM, Cam O'bi] and "Mirrors" [feat. Snoh Aalegra & Cam'Obi].