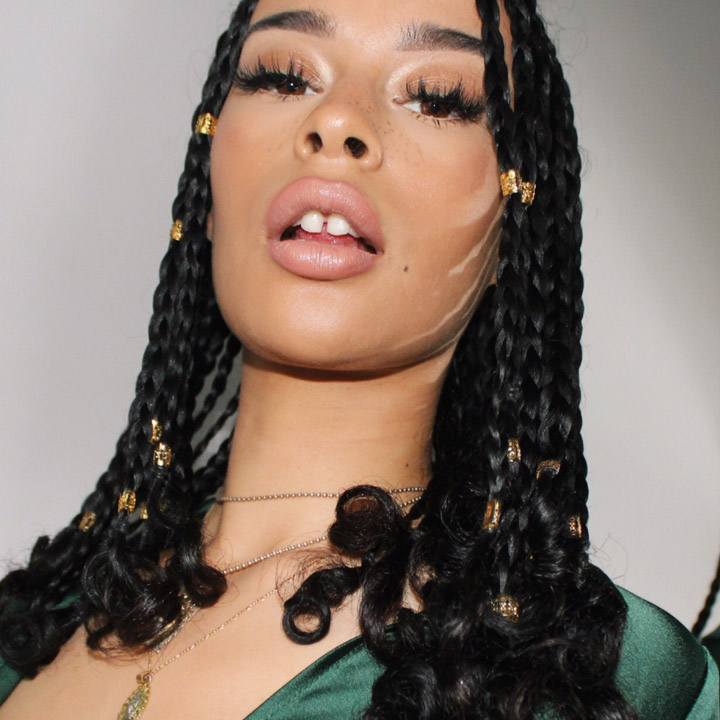 Have a look at the first self-made visuals for Rainy Milo's breakout single "'Bout You," and it sums up the siren to a T. The South-East London wunderkind strolls through Piccadilly Circus before hopping on the Routemaster and pensively gazing at the outside. The screen is split as she kisses the streets of London, still documenting the experience with her eyes. The culmination of her fodder as a seeker led to her debut album "This Thing Of Ours." It didn't come without its fair share of experiences, though, and now that Rainy Milo has hopped across the pond, she's ready to tell her story to the rest of the world. Allow her to reintroduce herself.

Childhood was a strange time for Rainy. Her English father and Guyanese mother didn't see eye to eye and they ultimately separated -- with Rainy, her sister, and her brother staying with their mum. Having left Guyana at 16, Rainy's mother never learned to read or write, so she learned concurrently with her children. Money was tight, but Rainy's mind was wealthy -- full of ideas for something greater for herself. At 7, she learned about the art of poetry and its ability to rhythmically convey emotions. "I just remember feeling like it was so cool that I could write something about how I felt and just have it rhyme," she expresses.

Milo's early musical landscape was conflicted. Her mum liked Ella Fitzgerald and Louis Armstrong, her dad was more into Elvis Costello, her grandfather was a reggae DJ, while Tupac was the soundtrack in her older sister's bedroom. The first band Rainy loved was N*E*R*D.

While most kids with something to say would pen private diaries, Rainy already had bigger plans. "As I got older I found a secondhand keyboard in my attic and would keybash out melodies," she recalls. "I realized I could mix the melodies with the poems, and I was like damn I could write songs about how I feel and not write in a journal. My songs became my diary entries."

Years were spent shyly remaining indoors while other kids were outside playing, as Rainy would obsess over music and seek shelter in internet search engines, studying the world and places she'd love to visit some day.

Rainy held a two-year stint at London's famed BRIT School, known for honing the talents of acts like Adele, Amy Winehouse, and Jessie J. On her short-lived tenure at the arts academy: "I'm still trying to decide whether I enjoyed it our not," she jokes, "because everyone is so talented and we're all creatives. It starts to turn into this weird bitchy competition thing, and I was like well this is killing the energy a bit."

By the time she dropped out of BRIT School in 2011, Rainy already had a very rough demo in pocket. She took to her local collective of young creatives and a supportive community on Tumblr to find solace. One serendipitous day, she typed "free jazz instrumentals" on Google and found one from producer BLCK RSSN. She liked the old jazz sample from Grover Washington mixed with a dusty hip-hop beat. She messaged and asked him if he minded her using it as the basis of a song. He didn't. The result was "'Bout You." "I put it on the internet expecting just my friends at school to hear it," she says. "But loads of people, A&Rs, started e-mailing me. I had to Google what an A&R was."

Rainy's notoriety gained more momentum when Gilles Peterson added "'Bout You" to the 8th installment of his Bubblers series. It was clear that a movement was starting. However, Rainy's big break came when she sent the track to an online friend she'd met while blogging about old school trainers and vintage Gucci jumpers. He passed the tape to a friend that worked in the music industry. Milo flew out to meet her and came back with a manager.

In the summer of 2012, Rainy recorded "Limey," a mixtape and statement of intent. "I wanted to make an EP so that when I met people I could give it to them and say, 'This is me. If you want to be part of it, great, if you don't at least you know.' I didn't want to be molded into someone I didn't want to be. I'd rather come through the door as who I am." "Limey" fused jazz vibes, hip-hop rhythms and Rainy's seductive, smokey vocals. As well as "'Bout You" and the Chet Faker-produced "Don't Regret Me," it included a brilliant reimagining of Steve Harley & Cockney Rebel's 1975 Number 1 "Make Me Smile (Come Up And See Me)," which took the original's bittersweet contrast of kiss-off lyrics and breezy melodies and turn them into something much darker.

A record deal with Mercury Records followed, and Rainy recorded her debut album. However, 18 months later, she was dropped in the midst of a messy label merger. Treating it as only a brief setback, Rainy returned to her DIY roots with her masters, eventually inking a deal with Big Picnic Records in New York City for the US release of her debut album. Performances piled on, the buzz continued, and this Spring we will finally hear this thing of Rainy's titled "This Thing Of Ours."

The album was overseen by Daje, who Rainy worked with on "Limey"; he also produced "Treasure Girl" and "Bankrobber" featuring Kossisko (a wildly imaginative cover, this time of The Clash). The title track was produced by LA-based Cole M.G.N. -- member of Ariel Pink's freak-rock ensemble Haunted Graffiti. Los Angeles production duo Caswell produced six tracks, including "Rats" and "Miss You." Inspiration came from Daje and his studio full of vintage gear. "We used a lot of vintage mics and compressors and we recorded to tape," says Rainy. "It changes the ambience of the music. It makes all the difference. Now I couldn't imagine not having that stuff. My favourite piece of gear is a Telefunken U47 mic from the '60s."

"This Thing Of Ours" takes the blueprint Rainy laid down on "Limey" and expands upon it. It's a stunning record. As a young artist Rainy is making forward thinking R'n'B tracks such as "Deal Me Briefly" and "Treasure Girl." Rainy is unflinchingly honest. "And my music comes from a young voice," she continues. "It's a fresh voice. I think you can tell that a lot of the things I'm singing about, it's the first time that it's happened to me. Not naive, but innocent. When you listen to an artist write a song about something they've written about before, you can almost hear the knowingness. It's like they know what the audience wants and they give it to them. I don't know what the audience wants yet. In fact I don't think about the audience. I do it for me."

She pauses before adding. "My ambition for this record is that I'd like it to define a sound that's my own. It would be great if when someone new comes along people say, 'This person is the next Rainy Milo.'"

Rainy went from never affording family holidays to booking a one-way trip around the world. At only 19 years old, Rainy Milo has cracked the code that many take a lifetime to decipher, which is to follow your fate by any means necessary. She owes it all to that little free jazz instrumental. "'Bout You' opened up the world to me," she says with sincere gratitude. "To be able to travel and see the world and visit these cities with a purpose...I'm so blessed." It's only the beginning.