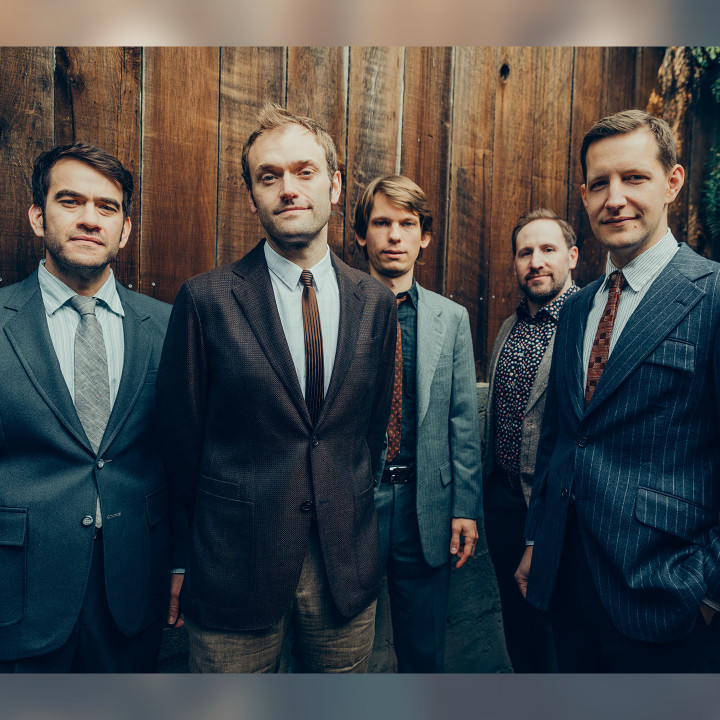 Punch Brothers are mandolinist Chris Thile, guitarist Chris Eldridge, bassist Paul Kowert, banjoist Noam Pikelny, and violinist Gabe Witcher. Their accolades include a Grammy® for Best Folk Album for their 2018 release, All Ashore, and praise from the media, including The Washington Post, which said, "With enthusiasm and experimentation, Punch Brothers take bluegrass to its next evolutionary stage, drawing equal inspiration from the brain and the heart."

In November of 2020, when the world felt so full of uncertainty, Punch Brothers did the one thing that they could rely on: they stood in a circle, facing one another, and made music. A weeklong recording session, after quarantining and minimal rehearsal aside from a few Zoom calls, had culminated in their new record, Hell on Church Street -- a reimagining of Bluegrass great Tony Rice's landmark album, Church Street Blues -- out on Nonesuch in January 2022. Hell on Church Street is a potent work by a band realizing their own powers and returning to the foundations of their music.

Kowert considers this album to "harken back to our early days in the band when we were playing regularly on the Lower East Side, learning all this new material to expand our sonic arsenal."

Pikelny adds, "It made me think of how many times Punch Brothers closed doors for ourselves as far as covering other people's material beyond one or two songs here and there. But I can't imagine making a more personal record, solely through the power of interpretation and delivery. It felt right and proper."

This band of virtuosi had spent more than a decade changing the face of acoustic music, stretching the limitations of instruments, and influencing a generation of young musicians -- but life has a way of keeping a band from getting in the same room. Thile elaborates that "these sessions were a reminder for me of what's really important. I felt silly having this band take up so little of my creative year; it reminded me that us five together is critical to my happiness."

Church Street Blues was Tony Rice's great statement. Rice had already made his name as a member of the legendary bluegrass band JD Crowe and The New South. He also pushed the boundaries of string music as a founding member of the David Grisman Quartet, but this album was him on his own, stripped back to just his guitar, his voice, and an inspired collection of songs. Performing songs by heavyweights like Gordon Lightfoot and bluegrass founder Bill Monroe, Rice's interpretations of these songs and tunes have since become the standard.

Punch Brothers formed in 2006. Their first Nonesuch record, Punch, was released in 2008 and combined elements of the band's many musical interests. In 2009, they began a residency at New York City's intimate Lower East Side club The Living Room, trying out new songs and ultimately spawning Antifogmatic (2010). In 2012, the band released Who's Feeling Young Now?, which Q magazine praised for its "astonishing, envelope-pushing vision," while Rolling Stone said, "The acoustic framework dazzles -- wild virtuosity used for more than just virtuosity." Their 2015 album, the T Bone Burnett-produced The Phosphorescent Blues, addresses with straight-up poignancy and subversive humor, the power and the pitfalls of our super-connected world.