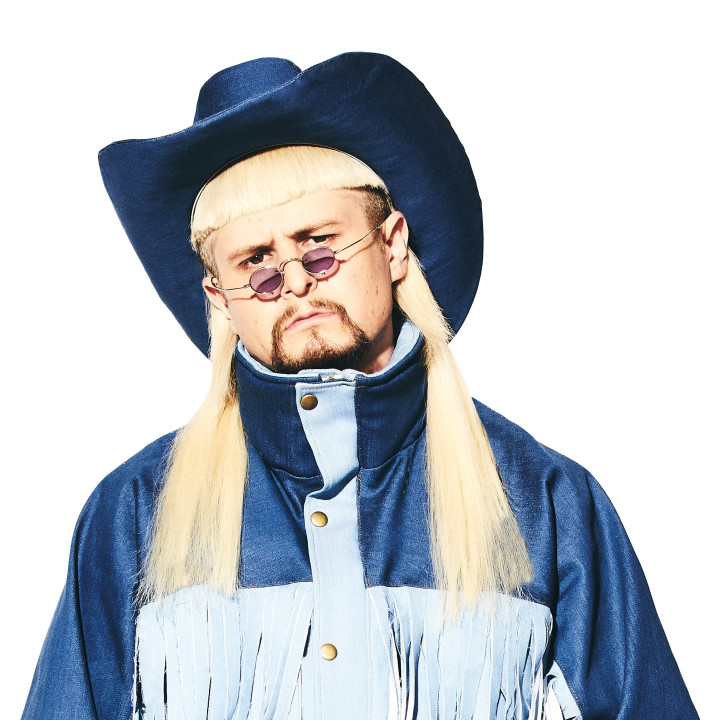 If you think you have Oliver Tree figured out, think again. For the past ten years this platinum selling vocalist, producer, writer, director, and performance artist has boldly explored the intersection of art and entertainment -- and his new and final album Cowboy Tears sees him carefully crafting a "cowboy emo" aesthetic unlike anything you've seen or heard. "This is a very emotional album, and it covers a lot of big themes like heartbreak, addiction and suicide," Oliver explains, adding that over the past two years he wrote over 100 songs and collaborated with artists ranging from Blink-182's Travis Barker to Nine Inch Nails' Ilan Rubin to friends he's known since childhood in a quest to complete this collection. Produced by Oliver with the likes of Marshmello as well as John Hill (Bleachers, Wu-Tang Clan), the result is an album that expands on the sound of his breakthrough debut Ugly Is Beautiful and further blurs the sonic line between pop and alternative in a way that's nostalgia-inducing while still looking toward the future.

The Santa Cruz native has already established himself as a groundbreaking artist in the worlds of music, comedy and action sports as he creates the musical equivalent of immersive theater for his legions of fans. Teeming with hits like "Life Goes On" and "Alien Boy," Ugly Is Beautiful displayed the different sides of Oliver Tree's music. However, for Cowboy Tears he decided to craft an album that was more focused that draws equally from the genres of alternative, pop and country and takes sonic inspiration from the last 60 years. "For this album, I was chasing the sound of a song I heard in a Taco Bell when I was five years old," Oliver explains, "But I wanted to put a modern spin on it with modern production." As strange as that may seem on paper, listening to Cowboy Tears, Oliver's statement makes perfect sense: This is an album that feels strangely familiar yet experimental in ways that are as exhilarating as they are shocking.

The album's opener and first single "Cowboys Don't Cry" sets the tone for the album: It's the story of a heartbroken outlaw trying to find his way in a world that's beat him down. A song about the attempt to exit a relationship despite the fact that "love is like a circle, there's no easy way to end." (If you caught Oliver Tree's show-stopping performance of the song on Jimmy Kimmel Live! you'd also appreciate how the absurdity of the imagery is heightened by oversized instruments and undersized cowboy hats). However, performance art aside, the song is instantly catchy and that hookiness with serious subject matter is what defines the music on Cowboy Tears, even if Oliver proudly flouts genre-based conventions. From the acoustic-based anthem "Freaks & Geeks" to the electronica-inspired experimentation of "Get Well Soon" to the anti capitalistic "Suitcase Full Of Cash," Cowboy Tears is social commentary disguised as anti pop -- and what's most impressive is the way the album succeeds on both counts. The narrative is also based in Oliver's own personal history: His grandfather and great-grandfather were cowboys, which lends an unexpected element of authenticity to the songs on this collection.

"I think one of my biggest strengths as an artist is the fact that I'm able to step back and see where there are holes in the pop-culture matrix," Oliver explains when asked about his overall vision for Cowboy Tears. Admittedly not all his ideas come to fruition (Oliver wrote treatments for

32 videos for the album), but his relentless work ethic not only informed his bowlcut and mullet look (dubbed the "bullet") for this iteration of Oliver Tree, but also inspired a sequel to the graphic novel he released last year called ALIEN BOYS. Oh, this is all in addition to forays into action sports and comedic ideas that are as self-deprecating as they are hilarious. "It's really a mix of low brow and high brow, so unibrow is a big part of my genre," he explains. "Even though the imagery can be absurd, this is my life's work. When I was making music as an 18 year old, my biggest fear was to be pigeonholed into a box until I realized that making an album is making a box, putting a bow on it and presenting it to the world. With Cowboy Tears, all I had to do was create a new box."

"Not only have I grown as an artist, but I've grown as a human being with the making of this album," he summarizes.

Most recently, Oliver has written two feature length screenplays and has been perfecting his craft as a director, writer and producer through his big budget music videos which he prefers to call short films. So could this really be the final Oliver Tree album? Only time will tell. Right now it's time to channel your inner outlaw and dig deep into Cowboy Tears. Whether you're here for the shimmering hooks, high-art aesthetic, personal reckonings or just a healthy dose of social commentary, you've come to the right place, partner.