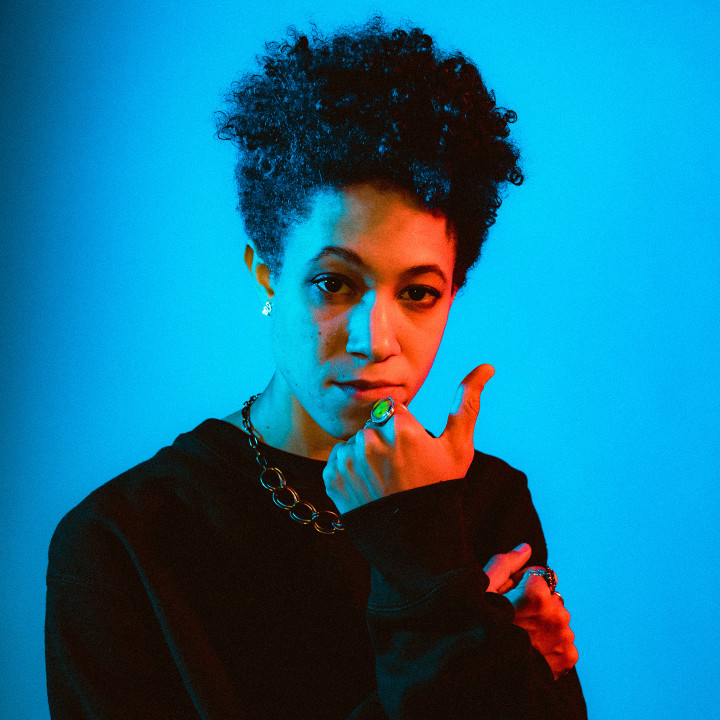 OLAN is sometimes troubled by this question. A multi-instrumentalist, singer-songwriter, producer and DJ, her music is as intriguing and hard to categorise as she is. Born Luzana Flores in Columbus, Georgia to a Dominican mother and Puerto Rican father, OLAN cites church as the place where her musical foundations were laid. In between orchestra classes and worship bands, her youth was spent listening to Paramore while honing her bass, guitar and songwriting skills.

Her tastes changed, as teenage tastes do, and after a move to Atlanta, she joined a songwriting camp for J.Cole's Dreamville Records, which led to her co-writing 'Buss It' for Ari Lennox. At 21, OLAN moved to Las Vegas, where she delved deeper into the electronic music scene and launched her OLAN project; then a combination of sprawling DJ sets and electric guitar-based live shows.

A stint in Belgium with her family followed, before OLAN started sending "really bad acoustic singer-songwriter" music to British producer Mat Zo. His 2013 Grammy-nominated album Damage Control, released on Anjunabeats, had expanded her understanding of what electronic music could be. "He was doing so many different styles of music, I didn't even know you were allowed to do that as an electronic producer!"

A friendship blossomed and OLAN became Zo's main collaborator on his 2020 album Illusion of Depth. 'In Motion,' a collaboration with fellow rising star Nourey followed, and in 2022 OLAN announced her debut album Contra, set for release on renowned electronic label Anjunadeep.

Written during the pandemic, Contra sees OLAN grappling with self-acceptance while honing her unique sound, informed equally by her love of electronic music as it is by her songwriting background. Inspired by an eclectic melting pot of influences ranging from R&B to Christian rock to drum & bass, OLAN also drew creative inspiration from the cult video game Outer Wilds, which helped her "come to terms with not having any reason to make music other than my own enjoyment of the experience."

OLAN emerges from lockdown and the album writing process revitalised and now finds herself performing on the world's most iconic stages, from London's Printworks and Red Rocks in Colorado to Ultra Miami. On stage, her raw energy and distinctive fusion of singing, playing guitars, and live electronic programming stand out, as does her presence as a queer woman of colour in a space often occupied by straight white men.

A question often asked by artists who are just discovering that standing out is the best thing they can do.