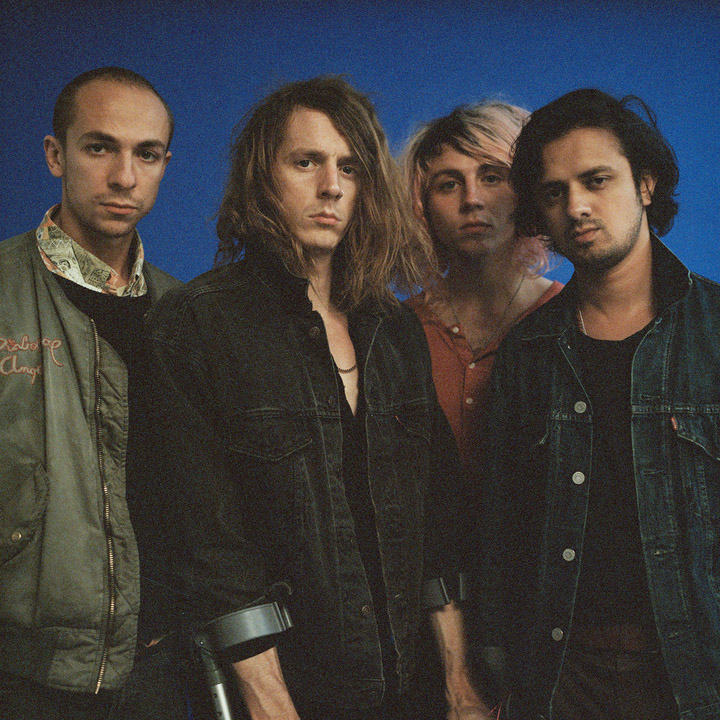 It's hard to believe that it's been ten years since Mystery Jets broke surface with their debut album, Making Dens. Of all the acts that sprang into life in The Libertines' Fagin-like wake, Mystery Jets were always the hardest to pin down. A Syd Barrett-enthralled troupe fashioning delightfully skewed, potting shed psychedelia out of playful wonky pop and unashamedly proggy flourishes from their Thameside hideout of Eel Pie, the South London island that played midwife to the British R&B boom in the early '60s.

While so many of their more two dimensional peers have long since faded away, what's kept Mystery Jets consistently fascinating over the last decade has been an itchy footed desire to keep trying new things. From follow up Twenty One's dazzling jumble of electro, off kilter indie and suit- jacket-sleeves-rolled-up yacht rock, Serotonin's well-buffed melodies and the dust-stained Americana of 2012's Radlands, to be a follower of Mystery Jets' music has been to eagerly await the next move of their restlessly curious muse.

On Curve Of The Earth, Mystery Jets have changed tack again, only this time it's been to strip back some of their more shapeshifting tendencies and distil the essence of what makes them such a great band. Arguably their strongest, most personal and most coherent set of tracks to date, it highlights what the kids down the front of their shows shouting "Zoo Time!" have known all along, that at their centre Mystery Jets simply write amazing songs.

"As well as us wanting to do something different, it is also a slight return to what we were as a band ten years ago," notes guitarist Will Rees, sat sharing a round of tea and roll ups with his bandmates across the street from their current East London HQ. "I think it's quite a revealing album also. We're not sort of being Americana or not being this polished pop thing like Serotonin was, and we're not being this yacht rock electro amalgamation of Twenty One: we're just getting to the very core of what our songs are and presenting them in a fitting way and not trying to be something other than what we are."

Three years in the making, Curve of the Earth's gestation began once they'd put US-inspired album Radlands to bed. "On Radlands it was like, 'Let's go and rent a house in Texas and hope that a record comes out of it,'" recalls singer Blaine Harrison. "We spent most of it in town, eating Mexican food and drinking margaritas. It's not like we would be out every night, but looking back I think it was a massively risky thing to do. So with this album, we thought, 'Before we actually start recording, let's have everything written,' which I like to call 'woodshedding.' Like in American movies when someone comes and finds Clint Eastwood and they say, 'You need to come back and save the town,' then he's like, 'But I'm old...' then there's a montage sequence of him trying to shoot cans and chopping up wood."

Rather than dusting off their old badge and revolver, for Mystery Jets this meant relocating back to London and setting up their own recording space in a disused button factory in East London with Harrison embarking on isolated writing sessions in a cabin out in the Thames Estuary mudflats. Hunkered down writing and recording for months on end, isolated from external influences. Producing it themselves and unencumbered by any pressure other than to make the best record they could, Harrison, Rees, drummer Kapil Trivedi and latest recruit Jack Flanagan found themselves rediscovering the gang mentality that had bound the band together at the start.

"The divide between home time and work time was completely non-existent," says Rees. "I remember being a kid and watching Help! when The Beatles go into all those doors and it's all one big house, I was like, 'Yeah, that's what a band should be, you should all live together,' and that's true. I think this is the record that we've felt most like a gang since the early days when we started and that's really about Jack joining and bringing a really fresh energy into it."

"To join a band midway through a tour was always going to be weird," reflects Flanagan who joined after original bassist Kai Fish departed in 2012. "But with this, going into that room, it was like going round someone's house for Christmas dinner... every day."

What's emerged out the other side is a suite of songs with a depth, scope and maturity that should confound anyone who views Mystery Jets as simply island-dwelling oddballs. It's there in Bombay Blues' juxtaposition of gently tumbling Fender Rhodes grooves and lyrics concerning the unwillingness to ease the suffering of your fellow human being, taking an unexpected swerve through soft-top down AOR via The War On Drugs and Don Henley's Boys Of Summer on Bubblegum then grimacing seductively on the knotted guitar lines and darkly pulsating synths of Midnight's Mirror.

"It's a song about facing up and feeling apathy towards yourself, I was trying to sort of stick the knife in myself a bit," Rees says of the track, which opens with dialogue from David Thewlis' acid- tongued antihero in Mike Leigh's cult classic Naked. "I liked the idea of doing an ugly song. I thought, 'Let's take an ugly subject and paint it in this ugly way, and just see what that's like."

Elsewhere, while the theme of moving further and further away from childhood's innocence has always been dotted through Mystery Jets' lyrics like a trail of breadcrumbs, on Curve Of The Earth they reflect on the very real emotional scars of ten years spent on the road directly without hiding behind imaginary characters such as Radland's Emmerson Lonestar and Sister Everett. The epic, Floydian grandeur of 1985 tackles Harrison's battling of anxiety and depression while Taken By The Tide addresses Kai Fish's departure from the band through a mix of wistful strumming and anguished blood letting.

"It's got to come from your experience and it's got to come from a real place in you," notes Rees. "Hitting 30 and looking at the last 10 years of good times and thinking, 'What the hell happened? All my friends are having kids and what am I doing?'"

"I think part of it links into the title, Curve Of the Earth" adds Harrison. "It's about the feeling of having been around the world a couple of times. We've been a band for 10 years, we've been to all these places we didn't know the music would take us. Exciting as it all is, one of the impressions you get when you travel the world a lot is that there's certain things that don't really change wherever you go. There are certain feelings, there are universal themes. It's a very personal record in the sense that these songs are written from our perspective, but it's with a sense of overview that comes from being able to have that sense of scale. I'm not sure we've explored that before. It's the intimate and the grand."

Where Mystery Jets go next after this is anyone's guess, yet given the strength of Curve Of The Earth the next ten years look set to be as exciting for us listeners as the first.