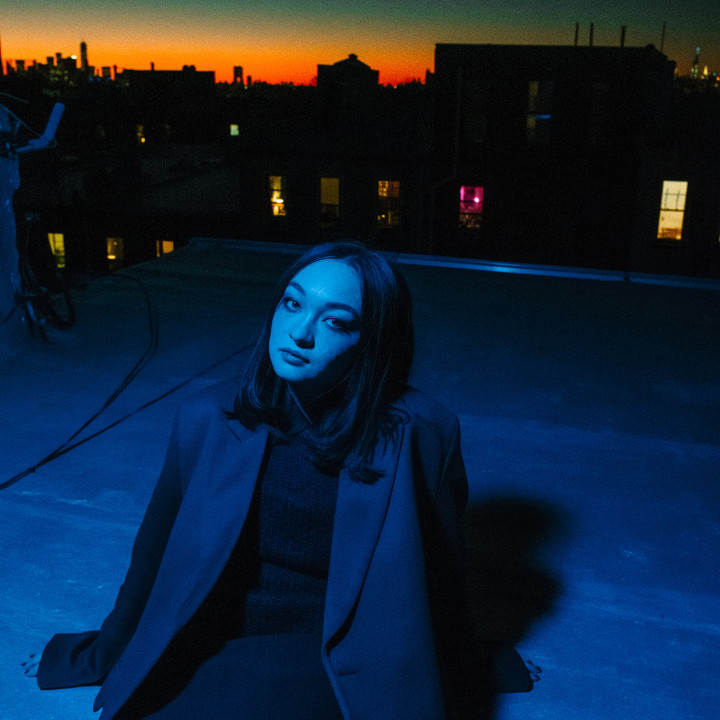 The world first met Maia when she was a 17-year-old singer with a ukulele and a now-famous screenname: mxmtoon. In 2017, and from the guest bedroom in her parents' California home, the high-school student began posting covers of pop favorites and her own catchy confessional musings, tunes that spoke frankly of her setting's assorted tribulations -- dates and a lack thereof, online socializing and offline loneliness. A queer kid of mixed Chinese, German, and Scottish ancestry, Maia sang songs that expressed an interiority of the underrepresented with honesty, understanding, and hooks that could not be forgotten. mxmtoon became a streaming sensation, her teenage ditties defining a new era of what it meant to make bedroom pop. Stepping into the studio proper for her 2019 debut, the masquerade, mxmtoon became an avatar for the new bloom of representation and inclusion in American pop. When "prom dress" became a hit,

Maia was still a teenager.

In truth, only five years have passed since Maia's self-made songs and videos began shaping a new sort of star through mxmtoon. But at least two of those years have, of course, passed like decades, each packed with enough worry and woe and loss and hope to catalyze aging at large. And so it goes with rising, mxmtoon's bold and compelling and wise second album, a 12-song set that looks at the hardest lessons of these recent dark days and opts to surge forward through triumphs of pop-and-disco confessionalism. Though wrought as always from personal experience, mxmtoon extends these glittering and moody tunes -- the impatiently waiting jangle of "mona lisa," the frustrated but persevering electrofunk of "scales," the incandescent and unforgettable bounce of "dance (end of the world)" -- as acts of communal solidarity. Maia knows this has all been hard, so she wants to sing it out, together.

In late 2019, Maia had just finished her first full tour as mxmtoon, and she felt inspired by the prospects of her career and life to come -- two new EPs in the making, more shows, a planned move to join her brother in New York. But as the pandemic took hold, she returned to her parents' home, working to return to her old writing habits in that guest bedroom-turned-makeshift studio. She felt stuck, however, so suspended in time and place she barely wrote anything at all during 2020. What's more, she lost a cherished grandfather to leukemia, rushing to see him one last time in Florida, and then a beloved grandmother. That's to say nothing of elections and protests, nationalist revanchism and bigoted violence, enough to beleaguer or age anyone.

Like a neon rubber band, though, Maia bounced back by penning "sad disco," an electrifying dance party for one inspired by the stacks of ABBA records that comforted her during her year of lost time. Backed by fluorescent synthesizers and tessellated drums, Maia offers a sharp scene of a teenager stranded at home, finding comfort in moving and singing along when "you're bored and alone." It's a three-minute revelation for mxmtoon, not only for the depth of its storytelling but also for its unapologetic disco indulgence, a longtime love of Maia that she's never brought to bear with such power. "sad disco" is music as rescue mission.

Much of rising unfurls from that same premise -- mxmtoon's hallmarked vulnerability buttressed by a newfound musical effervescence and might. These are the songs, as Maia puts it, that she wished existed when she struggled as a teen. They are instruction manuals for surviving, written for young people looking for themselves, but coded as magnetic pop. "growing pains" asks thorny questions about whether we actually improve as we age (or if that's just what we tell ourselves to feel better) above guitars that shimmer like a sunrise and drums that lift off like rockets. "dance (end of the world)" acknowledges the apocalyptic tenor of our times but finds at least 150 seconds of Gloria Gaynor-style salvation in holding someone (yourself included) close and just moving. "learning to love you" reckons with the exhausting demands of our breathless interconnectedness and funnels the dizziness into a pop sunshower, its namesake chorus rendered as a gleeful collective credo. "Frown" gets absolutely funky with absolute existential despair, a pressure-relief valve for the beset mind.

Everything here doesn't revel in musical refulgence, though. As Maia relates the story of visiting her dying grandfather during "florida," she remains under cover of chiming acoustic guitars and cascading cymbal washes, a choice that highlights the writing's poignant intimacy. Laced with arcing strings and textural harmonies, the exquisite "dizzy" captures the vertigo of someone who has spent four years in the public eye but, more broadly, anyone who thinks too much about the perception of online strangers. These more mellow moments betray the depth of their peppy counterparts and the breadth of experience that Maia, now 21, frontloads into mxmtoon.

For Maia, rising represents the culmination of an unintended trilogy that also includes dawn and dusk, the dual EPs she released in 2020. It's true that Rising continues their era of rapid musical growth for mxmtoon. But these dozen songs are the definitive steps forward for mxmtoon, because they are just as ingenious and honest and unguarded musically as Maia has always been lyrically.

This is the music she needed to make and hear after those years that felt like decades, after growing enough to know this is what other people might need, too. These songs collectively argue that growth is never done, that rising is just one of many restarts and beginnings to come. "The old me was OK," she declares at the start of "coming of age," the wonderland that closes rising. "But I think it's time for something new." From the sound of it all, she delights in being reborn.