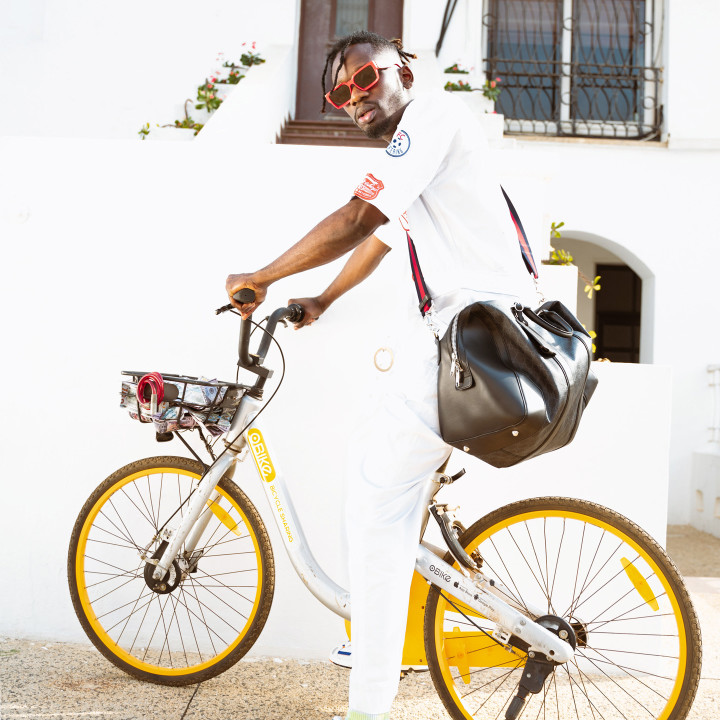 MR EAZI is the creative and business visionary leading African music into its future.

As a recording artist, the Nigerian multihyphenate is the voice behind Afropop hits "Pour Me Water," "Skin Tight" (featuring Efya), and "Leg Over," as well as groundbreaking collaborations with the likes of Beyoncé, Bad Bunny, and J Balvin. A serial entrepreneur, he's also the founder of emPawa Africa, a talent incubator program that funds and mentors emerging African artists, and the digital music aggregator emPawa Distribution -- initiatives hailed by CNN, Rolling Stone, Billboard, and Forbes for their forward-thinking approach.

Born in Port Harcourt, Nigeria, and raised in Lagos, Mr. Eazi began his music career while attending college in Ghana, where his side hustles included promoting concerts and running a concierge service shuttling wealthy kids to parties. His first-ever recording, made on a whim, became an accidental local hit, prompting him to self-release a mixtape, About to Blow, in 2013. Blending touches of Ghanaian highlife music and Pidgin slang with Nigerian chord progressions and R&B vocal inflexion, he soon developed a mellowed-out spin on Afropop which he dubbed Banku Music, after the popular Ghanaian comfort food dish.

After returning to Nigeria to work a corporate job in engineering, Eazi decided to make music his full-time focus, using a $1,000 gift from friends to fund the video for his breakthrough 2015 single, "Skin Tight." Arriving just as afrobeats was exploding into global consciousness, Eazi has quickly become an international figure, performing across Africa, Europe and the United States, pouring his travels into the critically-acclaimed mixtapes Life is Eazi, Vol. 1: Accra to Lagos (2017) and Life is Eazi, Vol 2: Lagos to London (2018). These projects and their resulting hit singles, along with Eazi's fashion-forward personal style, helped land Eazi in the pages of Vogue, THE FADER, Paper and other influential outlets.

Fiercely independent and digitally savvy, Eazi has resisted opportunities to sign with major record labels, instead choosing to operate his own independent imprint, Banku Music. Since establishing his career, he has answered the call to mentor and support other emerging artists from Africa. Taking inspiration from his own experiences participating in tech incubators as a young entrepreneur, he launched emPawa Africa in late 2018. In its first round of investment, emPawa Africa provided US$300,000 -- or US$3,000 each -- in funding for 100 artists from 11 countries, launching the careers of rising stars like Nigeria's Joeboy and Ghana's J.Derobie. The initiative's success led Eazi to form additional companies like emPawa Distribution, the first digital music aggregator focused solely on servicing African music to the global market; and emPawa Live, a college concert series, to support this growing ecosystem of talent.

2019 proved to be a watershed year for Eazi, on several accounts. April saw him make his debut at Coachella, where he was one of only two African artists to play the world's most prestigious music festival. He was featured on two tracks from Beyoncé's The Lion King: The Gift album, and appeared alongside Latin superstars Bad Bunny and J Balvin's on "Como Un Bebé," from the duo's collaborative album Oasis. He kicked off 2020 on a high note, releasing the striking video for "Kpalanga," and collaborating with DJ Neptune and Joeboy on "Nobody," which has topped charts across several African countries while reaching #7 on Billboard's World Digital Songs Sales Chart. He also appeared on J Balvin's Colores album which won a Latin Grammy.

In May 2020, Eazi appeared on the cover of Billboard's Africa Now issue, the U.S. music bible's first-ever issue dedicated to African music. Forbes Africa also included him in its annual 30 Under 30 issue spotlighting the continent's young thought leaders.

In June 2020, he released 'One Day You Will Understand' -- a four-song EP of mellow afro R&B and followed that up with a second EP titled 'Something Else,' which was released in February 2021.

Continuing his path as a business visionary, he has also announced the formation of the Africa Music Fund (AMF), a first-of-its-kind financial vehicle that will provide funding for African artists to expand their catalog based on their demonstrated streaming revenue, and projected incomes on future recordings.

Mr Eazi's ascent into global stardom has seen him clock over 370 million YouTube views, 7.5 million Spotify streams monthly, and over 5 million Spotify monthly listeners thus making him one of the most streamed African artists worldwide.