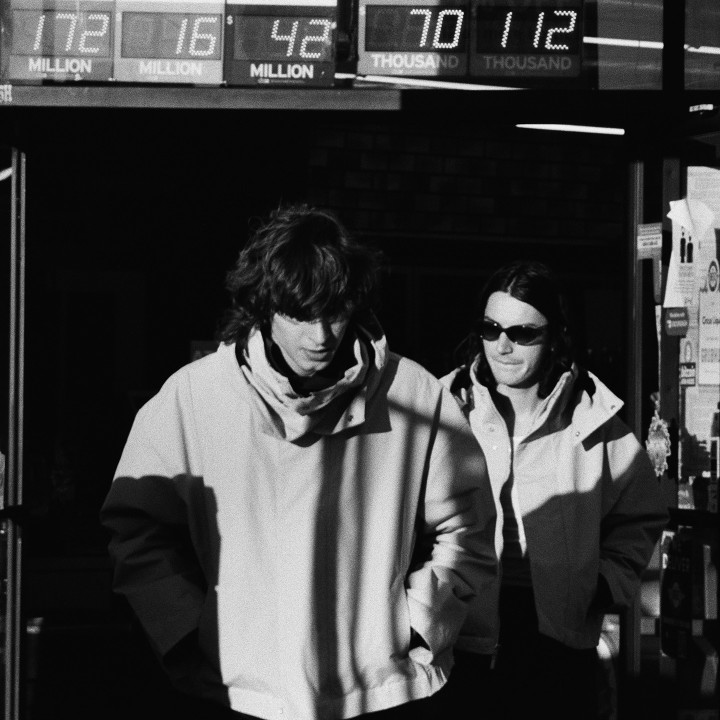 Two years ago, Kane met Malcolm and that was it.

Kane Ritchotte -- an admired drummer in Los Angeles (once of Portugal The Man), and an accomplished multi-instrumentalist -- was in the process of preparing his first album as a solo artist when a chance encounter with a newly transplanted Alabamian, Malcolm McRae, derailed his plans. Malcolm had only recently fallen in love with a young woman and followed his heart, foolishly, dropping everything to move to Los Angeles. Well, his heart was mistaken. The relationship was a disaster.

But the music that followed wasn't.

Within a week of meeting, the two realized that the music they made together transcended what either was doing alone. And they shared the conviction that music could be at once ambitious and speak to a large audience. So, they set out to prove that very thing.

Camping out at the legendary Sound City Studios with their producer Tony Berg, they carefully crafted a sonic vocabulary to articulate their shared vision. It had to rock, but not rawk. It had to be smart, but not smart-ass. Most of all, it had to express a point of-view; musically and lyrically. This triumvirate of Ritchotte, McRae, and Berg made the album in a wonderfully liberating vacuum; one with no pressure, no deadline, and no interference. Instruments were passed like joints. Each song became an atlas.

What emerged in the process were two distinct styles and philosophies; Kane, very studio-savvy, was able to express himself by merely picking up an instrument. His fluency on all the instruments lent a wonderful capacity to hear a song in several styles before one was agreed upon. Malcolm -- with a pure artist's unconscious approach, brought something more visceral. The combination was to bring us something...more*.

As we find in all the best bands, a wonderful competitiveness has evolved between McRae and Ritchotte. Each is determined to outdo the other with every new composition. The two more* EPs play like ten rounds of a heavyweight fight; and we're the ones knocked out.

A thumbnail look at the songs:

Settled In jumps right in and tells us of a relationship headed due south. "I shook hands with the other man...." Ouch! What starts as a screed devolves into self-flagellation by our narrator. This romance stinks...but boy, does it sound good! Swirling voices, distorted baritone guitars, the holy ghost of Carl Wilson...they're all there.

The abstruse All-American Guts turns exceptionalism on its head -- and it does a headstand. We're left wondering what might be worse; All-American guts or an All American gut. Perhaps one has displaced the other.

In Keeping It in The Family our boys return to plumb the depths of relationships...for all they're lacking in worth. Like Dante surveying hell, More gives us a map and, surprise! has added a tenth ring.

Kane lets us know right away of his Faustian pact in God's in The Details. Leonard Cohen and John Lennon loom literally and figuratively in this rumination on the vagaries of a public life.

We are invited to ride along in...Ride Along -- with Jason Spaceman our spiritual navigator -- visiting the land bordered on three sides by Tomorrow Never Knows, Bittersweet Symphony, and Feels Like We Only Go Backward.

In (Isn't That Just) Like Me, Malcolm returns to remind us his head is irrevocably fucked by his own poor judgement. They say acknowledgement is the first step toward recovery. Let's agree that Malcolm has only eleven more steps.

Henrik Ibsen wondered if the sins of the father might be visited upon the son; on his desk, Strindberg kept a scorpion in a glass with an apple so he could watch it endlessly attacking the fruit. More has written Elaborate Attractions. "It's the only way I've ever seen it done, or it's everything that's running in my blood."

We are asked to consider the color Green for all its worst aspects. Kane reveals a romantic ineptitude equal to that of his bandmate. His self-examination leaves us all a bit unclear how things might work out, but the trip is the destination.

Who among us isn't a Lazy James? The rose-colored past isn't always so rosy but looking forward can lead us inexorably back. But with The Smiths as a guiding force, more* makes the trip a beautiful one.

What happens when the actors in a relationship are...actors? It can't end well. As it doesn't in The Way. But amid all the pain and recrimination lies a loving reflection of a love gone quiet as our boys "wave and take a bow if this is how it's going to end."