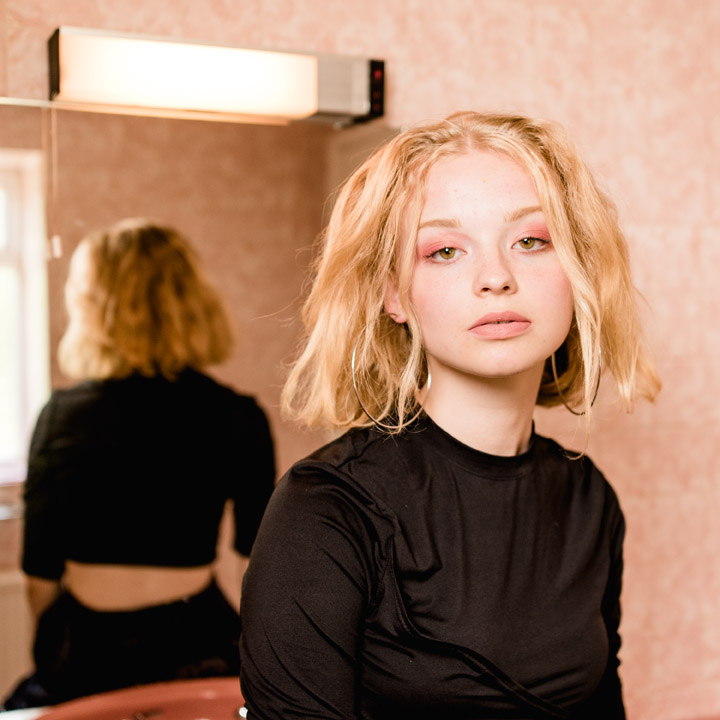 Some people seem destined to create art and use their talent to improve the world. Others simply fall into it. For 17-year-old Millie Turner the reality is somewhere between. Literally having been born into a family of artists, the cosmic wheels had already been set in motion. A painting father, an art school teacher as a mother -- all roads seemed to lead toward working in something creative. As to ending up as a musician though? That all seemed to happen by chance.

Growing up in Homerton, a small area in east London, Millie had always been surrounded by creative types. And it's worth nothing she isn't part of the new wave of families who have recently moved into the area, subtly changing the tone of the place with the scent of roasting coffee beans and locally brewed ale. "Our school used to be very multicultural," she says, "but now it's become more gentrified."

However Homerton is home -- it's where Millie's lived her whole life -- and, despite its many changes, she sees it as a great place to be. "Wherever you go there's something interesting or new that no one knows about. It's a corner of London that's really creative," she explains, touching on how she first become interested in the arts, which she's currently studying at A-Level.

So far, so growing up in one of the United Kingdom's creative capitals -- a place where art explodes from every street corner and the shape of the buildings change with each season. It's an unconventional upbringing (at least to some), but what's even more unconventional is the way Millie became introduced to music. Sure, her dad played music around the house -- things like U2 and standard father fodder -- but it was a community church where she initially started to collaborate with people.

Having learned the piano since a young age (and eventually giving up -- "I hated grades so much it was horrible"), the church gave Millie a new arena in which to practice her improv skills. And by the way, when we're talking about church, please remove any strict stereotypical biblical aesthetic from your mind. "We wouldn't play church songs, it was more Beatles stuff. It was a weird church!" explains Millie, detailing her introduction to genres like jazz and another instrument, the steel pans, which she also plays. "There was a whole band and if you wanted to join in, you would come in and play songs."

The plan though had never been to make music. Millie simply played at church then lived her life, doing all the normal things teenagers her age do -- albeit lived out in her unique almost bohemian like family environment. Her bedroom walls, for example, are covered in spray paint, writing, drawings; meanwhile, she says, there are multiple stains everywhere "wine, but mostly tea -- it's my creative space."

It was only when Sixth Form came along with its promise of free periods and extra time that Millie stumbled into music. Most of her friends had gone to Brit School but she decided to study back in East, meaning her evenings often had more space within them to create than they had before. As a result, Millie and a friend (her producer, Dave) started to practice after school, initially with the plan of Dave teaching her to play guitar. Then... the world -- well the world became the kind of confusing and dark place it is now, and Millie and Dave decided to write a song together, with Dave producing and Millie singing, all of which happened the night after Trump's election. "We were like 'We have to write a song,'" she explains. Then a quick-double back: "It's linked to that, with that in mind, but not necessarily. I remember thinking the one place I really want to be is by the sea. That's where it started really."

The song in question is called "Underwater" and it's the sound of freedom, the tone of washy synths bathed in and beating with euphoria. "There's a sense of security [being by the sea] and it's also a metaphor for the unknown because it's just so big. Also Trump can't defeat the sea!" Millie notes. For her, the idea being submerged in the deep ocean of life is both scary and also empowering, and it's that idea that can be found at the root of the song. "Take me down down down down, deeper into the sea," she sings, backed up with a video that's also shot on a beach in Scotland.

"We are young, we are afraid, but we are free" is one lyric from the song that can also act as it's biggest takeaway. This idea of giving a voice to the larger picture is something that's important to Millie and places her directly at the forefront of the new wave of young artists who are bringing purpose to their art. For her, making music means having the ability to "influence a generation and be part of a movement."

Alongside "Underwater" there's also Millie's second release, "Eyes On You," a track with a slightly more downbeat but no less euphoric feel. Written after a trip to a museum with her grandparents, the track is about vulnerability -- "being taken apart -- not weirdly, but emotionally. Being stripped down but being okay with someone in that state of being vulnerable." That said, like the best songs, it's also open to interpretation. "Someone said they thought it was about death," Millie laughs.

For now those two songs act as a starter dish, the first of many more to come. Waiting to be served to the table is "You and I," a song that immortalises two people in one delectable pop song. Then there's "The Shadow," which showcases Millie's talent for spoken word, switching between singing and colourful poetry, building on the idea of Millie using her voice to illuminate life through music. Ultimately the combination of these songs are the continuation of Millie's consistent fascination with the arts, only this time she's also using music as a creative tool and bringing it into the fold. Call it chance, call it destiny -- Millie Turner is piecing together a colourful world one song at a time.