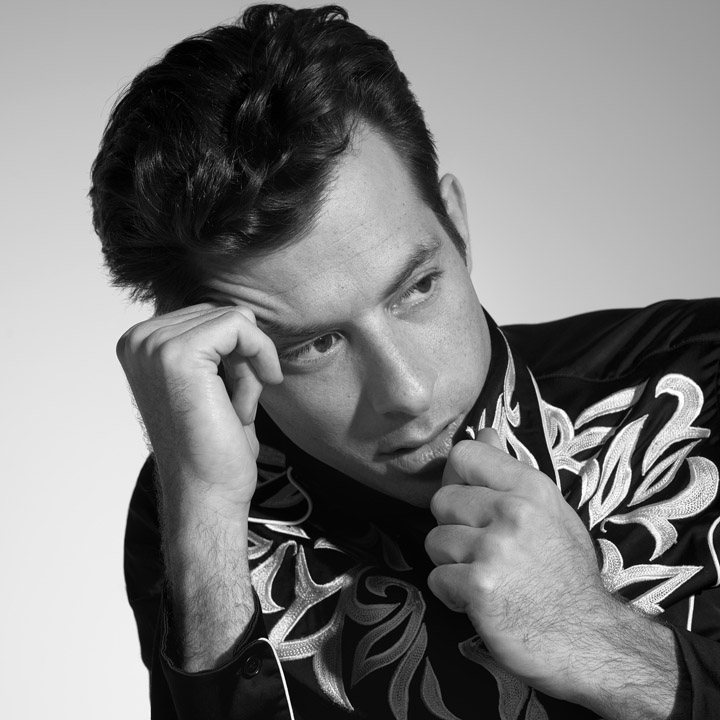 Mark Ronson is an internationally renowned DJ and five-time-Grammy-Award-winning and Golden Globe-winning artist and producer.

Ronson spent the first eight years of his life growing up in London, England. Having played guitar and drums from an early age, it wasn't until moving to New York City following his parents' divorce, that he discovered DJ culture. At age 16, and already a fan of artists like A Tribe Called Quest, Run DMC and the Beastie Boys, Ronson began listening to mixtapes released by various hip hop DJs. Inspired, Ronson confiscated his step-father's vinyl collection and tried his hand at mixing. It was the first step in a career highlighted by work on a multi Grammy-winning album by Amy Winehouse, as well as his own Grammy-winning, global smash hit with Bruno Mars, "Uptown Funk."

In the late 1990s into the early 2000s, the New York club scene was percolating with booming hip-hop and glitzy R&B. Ronson quickly earned himself a reputation through stints on the decks in downtown clubs before becoming the DJ of choice for many noteworthy parties. Hip-hop mogul Sean "P. Diddy" Combs hired Ronson to DJ his fabled 29th birthday bash. These and other high-profile gigs boosted Ronson's profile and connected him with other artists, many of whom were interested in collaborating. His first production gig came from British soul singer Nikka Costa and he found that his experience of working a club crowd informed his production skills. Fusing his eclectic turntable skills with his knowledge of musical instruments and songwriting, Ronson soon embarked on his first solo record. Featuring an array of diverse musical talent including dancehall rapper Sean Paul, hip-hop artist Mos Def, Jack White and Rivers Cuomo of Weezer, Ronson's debut album, Here Comes the Fuzz, appeared on Elektra in 2003 and spawned a club hit in the single "Ooh Wee" with Ghostface Killah and Nate Dogg.

Ronson's ability to recognize raw talent saw him work with both Lily Allen and Amy Winehouse, whose 2006 album Back to Black was a world wide hit and went on to win multiple Grammys Awards, two specifically for the Ronson-produced lead single "Rehab." His own sophomore album, a collection of covers with various vocalists titled Version was released in 2007 and spawned the hits "Valerie" (a Winehouse-fronted cover of a Zutons' single) and "Stop Me" (a soulful take on The Smith's "Stop Me If You Think You've Heard This One Before" sung by Daniel Merriweather). It went double platinum in the U.K. where music critics described it as "era-defining." In the US it was met with much critical acclaim and contributed to Ronson's 2008 Grammy Award for 'Producer Of The Year.'

Between solo releases, Ronson continued to produce for other artists, including Adele ("Cold Shoulder"). In 2010, he began performing under the moniker Mark Ronson & the Business Intl and released his third studio album, Record Collection, another star-filled recording with previously unthinkable pairings, including Duran Duran's Simon LeBon and Wiley on the title track.

2015 saw the release of Ronson's fourth studio album, Uptown Special. Co-produced with Grammy award winning producer and songwriter, Jeff Bhasker, it was conceived as a musical homage to the decades worth of soul, funk and hip hop records that Ronson would drag around New York City nightclubs in his early years as a DJ. The album features collaborations with Bruno Mars, Stevie Wonder, Mystikal, Tame Impala's Kevin Parker and Miike Snow's Andrew Wyatt among others. Uptown Special also features lyrics written by novelist Michael Chabon. The album's lead single, "Uptown Funk," was a meteoric success, spending fourteen consecutive weeks at number one on the Billboard Hot 100, making it the second-longest No. 1 in chart history and longest of the 21st century. It earned Ronson two Grammy Awards at the 2016 ceremony: 'Record of the Year' and 'Best Pop Duo/Group Performance.'

Following the success of Uptown Special, Ronson returned to producing for other artists. He spent much of the spring and summer of 2016 in studios in New York City and Los Angeles working with Lady Gaga on her fifth album, Joanne. The album's first single, "Perfect Illusion" was co-produced by Gaga, Ronson and Tame Impala's Kevin Parker. The track was released on September 9th, 2016 and hit the #1 spot on iTunes in 60 countries. Joanne entered the Billboard 200 at #1 and was certified Platinum. In the same year, Ronson produced Queens Of The Stone Age's lauded album, Villains.

Ronson's project with Diplo, named Silk City after the Philadelphia diner where they first met, was unveiled in May 2018 with the debut single "Only Can Get Better" featuring vocals from his Version-collaborator Daniel Merriweather. Next came ""Feel About You" featuring Mapei, "Loud" featuring Goldlink and Desiigner, and, in September, "Electricity" with Dua Lipa, which earned him a Grammy nomination for "Best Dance Recording" in 2018.

He is a co-writer of the song "Shallow," recorded by Lady Gaga and Bradley Cooper for the movie A Star Is Born, for which he earned a Golden Globe Award for "Best Original Song," as well as two Grammy nominations.

Most recently Mark collaborated with Miley Cyrus on the hit song, "Nothing Breaks Like A Heart," the first single off his upcoming fifth album, which will be released in 2019. Since its release in late November the track has garnered 84 million streams and more than 36 million video views. The pair performed the song together on SNL in December.