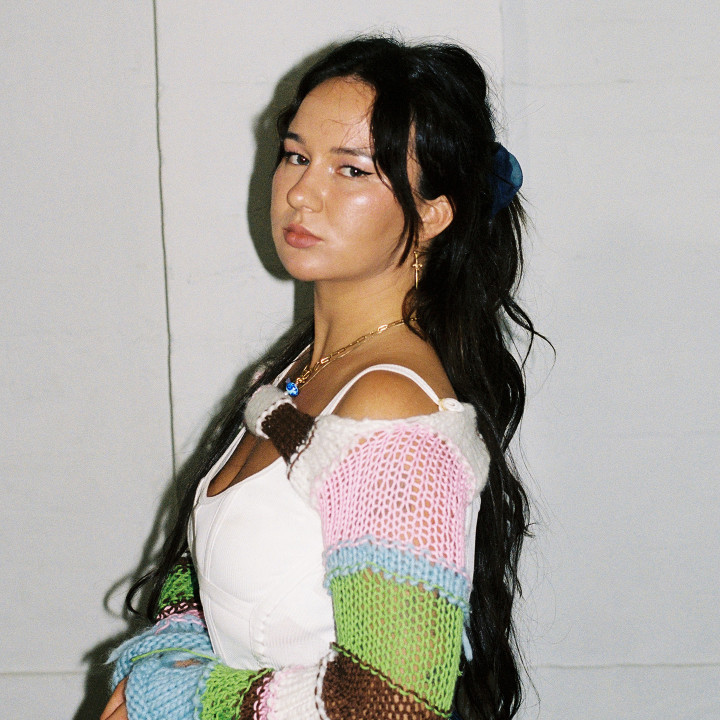 Prized producer, songwriter, and collaborator Mallrat -- aka Grace Shaw -- is a master of clever, timeless pop. Her trio of early EPs -- Uninvited (2016), In The Sky (2018), Driving Music (2019) -- are documents of an artist on the rise. Mallrat has garnered attention from the NY Times, NYLON, NPR, and more. PAPER named her in their "100 Women Revolutionizing Pop," after making it onto the "Best of" lists by The Fader, Billboard, NOISEY, NME, Triple J, and Teen Vogue. At home in Australia, she continues to place Top 5 on Triple J charts. In the states, she made her late-night TV performance debut on the Late Late Show With James Corden, while in the UK, winning "Best Australian Solo Act" at the NME Awards. She has toured both at home and internationally, including supports for Maggie Rogers, Post Malone, and King Princess, selling out headline shows from London to New York, and collecting fans in the likes of Mark Ronson and Azealia Banks along the way.

Now, the multi-talented artist and performer Mallrat announces her debut full-length, Butterfly Blue, where she embodies the spirit of its titular creature, but without the delicacy that keeps you at a distance. Over a dozen clever and openhearted tracks, she draws you in close and shows you the world through her wide, hopeful eyes.

"I've always valued music that is interesting, beautiful, and unpretentious. Something timeless and not reactive," Shaw says. "'Butterfly Blue' was made with that in mind. It's a demonstration of not pretending to be anyone else."

Released alongside the record is album highlight "To You," which comes fresh off the back of the year's most unexpected collaboration "Surprise Me (feat. Azealia Banks)" and its critically acclaimed predecessors "Your Love," "Teeth" and "Rockstar."

Butterfly Blue solidifies Mallrat's reputation as a master of clever, timeless pop. Sweeping across vast, airy production is often surprising samples and sounds tucked under the surface: chopped-up Gangsta Pat bars, a flipped recording of a children's choir performing Lisztomania. Distorted effects were recorded from discarded children's toys -- a sonic gift from Clams Casino producer. Layered, like an instrument all their own, are her signature breathy vocals, more assured than ever.

The 12-track release marks a triumphant debut from Mallrat, one that solidifies her reputation as a master of clever, timeless pop. Having won early praise from the likes of The Guardian, NME, Rolling Stone, Pitchfork, and Paper Mag, Butterfly Blue is taking Australia's pop princess global.

Mallrat's journey to become the artist capable of making such an accomplished record has been a fascinating one -- to watch and experience. Describing the metamorphosis of her favorite insect, she explains: "The transformation they undergo is almost incomprehensible. They dissolve into goo and then reconstruct themselves -- but hold onto the memories of their time as a caterpillar." A symbol of reinvention, Butterfly Blue is a full-circle moment for Mallrat.

WHAT THE PRESS HAS BEEN SAYING...

About "Surprise Me (feat. Azealia Banks)"

"The song is an infinite loop of bubblegum-trap bliss. Sometimes you just have to steal some joy wherever you can find it...thank you for this" - Pitchfork

"...feels like an instant classic, possessing as much charisma and renegade wit as any of Banks' hits" - PAPER

"Bright synths and hi-hats pay homage to the minimalist Soundcloud rap that influences Mallrat's hyper-online, infectious pop. Banks is wickedly funny with her sex-filled rap that is as jarring as it is addictive" - PASTE

"Mallrat has an untouchable air of cool, and her new track "Teeth" is one of her most fully realized sonic experiments yet... It's a step into an exciting new arena for Mallrat, and she sounds right at home" - Consequence

"Equal parts gloomy and vibrant, the track pleasingly demonstrates we might not know what to expect from a Mallrat album" - CoolHunting

"Before the release of her debut album, Mallrat gave fans a taste of what to expect" - E! Online

"Mallrat's ability to pair the sonic template with slick melodies, and the titular phrase repeated into a hypnotic refrain, produces an encouraging start to the indie artist's next era" - Billboard

"It's a song with endless surprises, perhaps the biggest of all being Mallrat's consistent innovation and risk-taking" - PASTE

"perfect pop anthem" - Ones To Watch

"sounds like the sweetest daydream you've ever had" - NYLON

"There's an organic, encompassing warmth to Mallrat's music; her songs are pop polished, but nearly always break through to complex, unvarnished emotion. "Rockstar" is an addictive, breathtaking kiss-off" - PAPER

"best single of her career" - Idolator

"Taking cues from the signature sounds of Lana Del Rey and Kacey Musgraves, Mallrat leads listeners into a dreamy world in which she imagines a whole new life for herself" - Refinery29

"Rockstar" is another great example of Mallrat's growth as an artist and a great showcase of her lyrical chops. "Rockstar" is the perfect starting point for anyone new to the Mallrat phenomenon" - Indie Shuffle