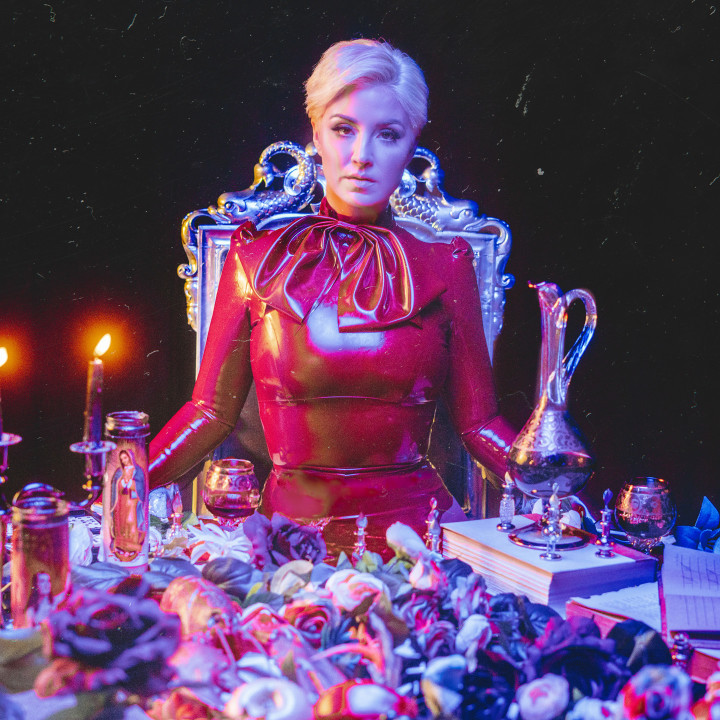 The third album from Maggie Rose, Have a Seat is the work of a phenomenally gifted artist showing the full extent of her power. After years of honing her chops and making her name as a force-of-nature vocalist, the Nashville-based singer/songwriter has dreamed up her own unbridled collision of rock-and-roll, soul, folk, funk, and R&B: a fittingly eclectic sound for a musician whose live experience includes opening for Heart and Joan Jett & the Blackhearts, touring as direct support for Kelly Clarkson, and sharing the Cayamo Cruise bill with Emmylou Harris and Jason Isbell -- all​ in 2019 alone. Centered on the stunning vocal command she's revealed in taking the stage at ​ The​ Grand Ole Opry over 80 times, Have a Seat​ ​finds Rose approaching her music with more confidence and clarity of vision than ever, ultimately sharing a selection of songs both timeless and urgent.

Produced by Ben Tanner of Alabama Shakes, Have a Seat came to life at the iconic FAME Studios in Muscle Shoals, AL. In a series of pre-pandemic sessions, Rose recorded live with a lineup of heavy-hitters that includes bassist David Hood of the Swampers (the group of session musicians who played on records from legends like Aretha Franklin and Etta James) and guitarist Will McFarlane (Bonnie Raitt, Levon Helm), along with her longtime bandmates/collaborators Larry

Florman (background vocals/percussion), Alex Haddad (guitars), and Sarah Tomek (drums) of Them Vibes. Also featuring an esteemed string section and swampy horn ensemble -- in a way that's never been so integral to Rose's sonic aesthetic -- Have a Seat continues the free-flowing musical exploration she first began on her powerhouse 2018 album Change the Whole Thing​​. "I had the idea of recording at FAME in the back of my mind throughout the entire writing process for this project," says Rose, who first visited the studio upon performing as part of the Muscle Shoals to Music Row program in late 2018. "I took a lot of inspiration from the Aretha Franklin and Wilson Pickett records that came out of that very room, playing up my R&B sensibilities more than ever and really tapping into my soul and its connection to this music."

Like any great soul singer, Rose beautifully captures the tensions of the current moment, gently presenting her pensive social commentary while providing much-needed reprieve from the everyday chaos. "These songs were written during a contentious time, and there are undertones to the lyrics that are influenced by the state of our world politics and the politics of the music industry," she says. "The title Have a Seat is responsorial, placing an emphasis on inclusivity -- like, 'Here, sit down. Let's try talking to each other.' One of the most loving things we can do is listen and make others feel​ heard -- give people the space to speak their mind and be themselves. However, there's also an intended meaning to the title that points to the power in occupying the seat that's designated to you: I am claiming a seat I believe is rightfully mine, and I want others to do the same."

One of the lead singles to Have a Seat​, "For Your Consideration" arrives as a full-hearted plea for understanding and compassion, its smoldering verse and stormy chorus brilliantly mimicking the back-and-forth of a heated argument. "When I wrote that song I'd just been in L.A. and seen all the billboards on Sunset for some awards show that was about to happen," says Rose. "I decided to repurpose the phrase 'For Your Consideration' to make it about the aftermath of a fight, where the people are so caught up in saying what they want to say that they never actually listen to each other."

The slow-burning opening track to Have a Seat​, "What Are We Fighting For" offers a gorgeous introduction to the album's message of loving solidarity, its power intensified by Rose's tender yet mighty vocals and the soul-soothing harmonies of Karita Law and Shanay Johnson (a duo known for their work with Brittany Howard and Emily King). On "Do It," Rose veers into a brighter mood, bringing fiery horns and breezy rhythms to a personal mission statement she sums up as "doubling down on being an individual." With its ethereal textures and hypnotic guitar tones, "Saint" unfolds as a delicate refusal to succumb to the expectations of others. ("That song's about admitting to not being perfect and being okay with that," says Rose. "It's something we should stop expecting of women -- because women are many things, and saintly is not a requirement.") And on tracks like "Are We There Yet" -- a crystalline piece of symphonic pop graced with lush and luminous string work -- Rose ventures into unsparing self-reflection. "'Are We There Yet' is a song about the way we all torture ourselves with our ambitions," she says. "Instead of always thinking about the next thing I want to go out and get, I'm trying to just focus on enjoying what I already have -- which is really pretty great."

With its standouts also including "What Makes You Tick" (a gloriously funky track co-written with and featuring blues guitarist and Grammy nominee Marcus King), Have a Seat finds Rose boldly elevating her songwriting and sound while reclaiming the joyful freedom of her early years. Growing up in Maryland, she cut her teeth sneaking into nearby bars to sing with a Bruce Springsteen cover​ band at the age of 16, then moved to Nashville several years later after being discovered as a potential breakout country star. Although she soon achieved major success on Music Row and earned acclaim from the likes of the New York Times -- who hailed her as a "sturdy heartbreaker...full of astute, aggrieved songwriting...and attitude that even in the post-Miranda Lambert era feels knifelike" -- Rose grew increasingly restless within the confines of country. After expanding her musical palette on Change the Whole Thing​, she found herself embraced by luminaries in the rock and pop and Americana worlds, and even became massively beloved by the jam-band community (thanks in no small part to her exhilarating performance at the Peach Music Festival in 2019). Quickly gaining recognition as a fiercely independent artist, she was eventually tapped by Osiris Media to create "Salute the Songbird with Maggie Rose": a weekly podcast based on candid conversations between Rose and her favorite female trailblazers in music, including Martina McBride and Go-Go's bassist Kathy Valentine.

For Rose, the charmed experience of recording in Muscle Shoals has catalyzed the start of a thrilling new era in her musical evolution. "Working with musicians of that caliber and knowing they were giving my music so much attention definitely made me thrive," she says. "I felt so safe going deep into the emotional places within the songs, and I think you can feel that love and camaraderie when you listen to the record." At the same time, Have a Seat is undeniably the sound of an artist fully coming into her own, without concession or compromise. "I've worked in this industry for over a decade, and I feel like I've finally carved out a lane that's genre-bending and all my own," she says. "I had to really fight to find that space for myself, and this record is my way of staking my claim."