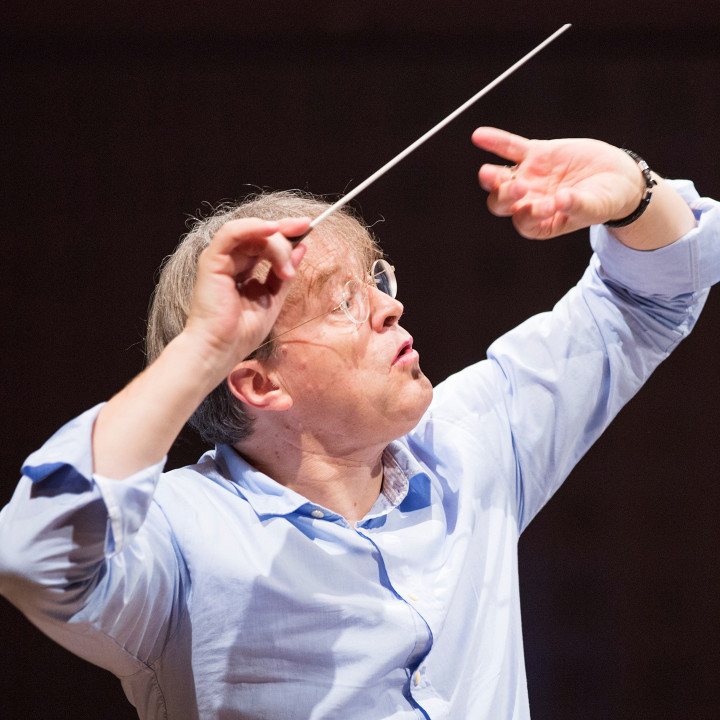 A native of Lucerne, Switzerland, Ludwig Wicki grew up in a musical environment influenced by church and folk music. As a child and young adult, he studied trombone and became a member of the Lucerne Symphony Orchestra, eventually expanding his studies to include orchestral and choral conducting. After several years at the music school in Bern, Maestro continued his education in Dresden with Cantor Martin Flämig and Pescara with Professor Donato Renzetti. During this period he also devoted much of his time to chamber music and founded the Lucerne Philharmonic Brass Quintet. Following the success of the ensemble's recordings that were broadcast on radio and TV and released on CD, Ludwig Wicki was invited to play with the Empire Brass Quintet at the Tanglewood Academy in Boston. As a baroque trombonist, Maestro frequently performed with various period instrument orchestras and ensembles, which further informed his approach to conducting. Mr. Wicki was fortunate to collaborate with such luminaries as Andrew Parrott, Nikolaus Harnoncourt, Jeremy West and Simon Standage.

As a conductor, Maestro Wicki enjoys working with a variety of musical genres. In his role as the Chorus Master of the Lucerne Abbey Court Church, he covers a wide range of repertoire from Gregorian chants to contemporary sacred music, with a primary focus on the classical choral masterworks of Haydn, Mozart, Beethoven, Schubert and Mendelssohn, or the Baroque music J. S. Bach, G.F. Händel as well as the renaissance masters: Palestrina, Monteverdi and Schütz. He also directs the Renaissance Ensemble "Il Dolcimelo," which performs with period instruments.

Maestro's long-time passion for film music was fulfilled in 1999 with the creation of the 21st Century Orchestra Lucerne. This professional ensemble, led by Maestro Wicki as its sole Artistic Director, currently offers a serie of more then ten projects every season as well as guest appearances in London, Paris or New York. It has developed partnerships with renowned film composers, including Howard Shore, Michael Giacchino, James Horner, Danny Elfman, Patrick Doyle, Randy Newman, Martin Böttcher, and George Fenton. The 21st Century Orchestra also accompanies silent classics of Charlie Chaplin and Buster Keaton, as well as cult films, such as Nosferatu.

In 2008 Ludwig Wicki led the 21st Century Orchestra and Chorus in the world premiere of The Fellowship of the Ring at the KKL in Lucerne. This was the first-ever screening of the first part of the Lord of the Rings Trilogy with a live performance of the original soundtrack. In the following years, he performed the work in Munich, Washington (Wolftrap),London, Chicago, Amsterdam, Lyon, Sydney, and other major metropolitan areas. The performances at the Royal Albert Hall in London with the London Philharmonic and the Radio City Music Hall in New York with the 21st Century Orchestra were the highlights of this highly successful project, which went on to include the world premieres of The Two Towers in 2009 and The Return of the King in 2010, under Maestro Wicki's baton. In the current year he directed the orchestra in the world premieres of Pirates of the Caribbean: The Curse of the Black Pearl, Dead Man's Chest, At World's End and On Stranger Tides. He also conducted the world premieres of Gladiator, Fantasia, Star Trek, Star Trek Into Darkness, The Perfume, and Alice in Wonderland. In April 2015, and for the first time ever in the United States, Maestro Wicki conducted the entire The Lord of the Rings Trilogy in seven concerts at the David H. Koch Theater at Lincoln Center, in New York. In 2015 he also conducted the world premieres of Titanic in the Royal Albert Hall in London, the premiere of Ratatouille in Paris and Indiana Jones in Lucerne. Several world premieres followed 2016, Batman in Lucerne and Amadeus, Jurassic Park and Aliens in the Royal Albert Hall, 2017 The English Patient and Winnetou, 2019 Baahubali and Sissi. In 2014 he conducted the recording of Michael Giacchino's score for Jupiter Ascending at Abbey Road studios, 2016 The Book of Henry and 2018 Jurassic World 2. In the summer 2020 Ludwig Wicki conducted the recording for the Movie Pieces of a Woman in the Teldec studios Berlin.

Ludwig Wicki teached chamber music and conducting at the conservatories in Lucerne and Bern. In 2007 he was honored by the city of Lucerne for his accomplishments as a musician and educator. 2013 he got the Award for Excellence in Cultural Creativity from the Global Thinkers Forum.