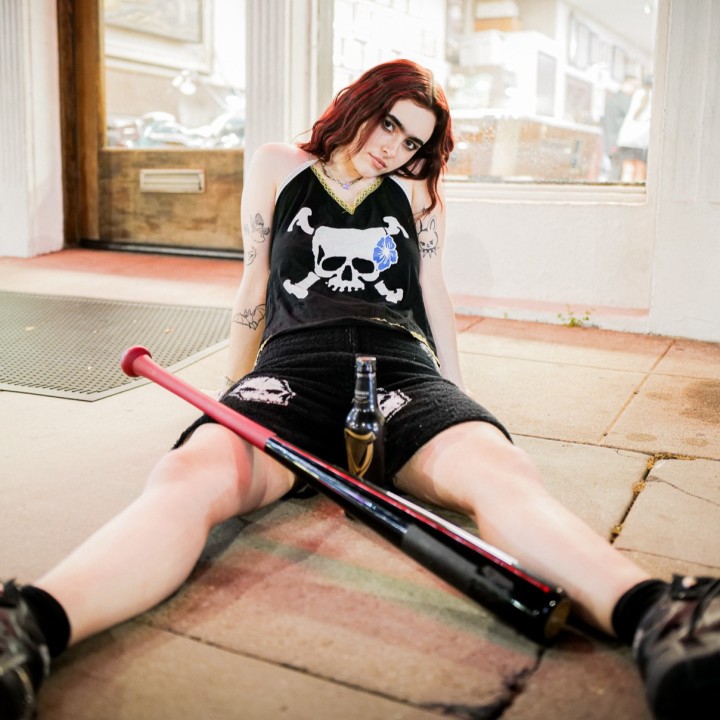 With her cherry red hair, heavy monobrow and myriad tattoos, you might be ready to frame Norwich-born newcomer LOZEAK as a rebel. But she's not one; that's just how she's carried herself through life, using self expression and social media as a way of making -- rather than being shaped into -- the mould.

Having already cultivated a huge online following off the back of her covers and TikTok videos (over 557k followers and over 40 million likes), the artist -- real name Lauren Eakins -- is ready to prove that she has a sound all of her own. Inspired by the guitar music of her teenagehood, when she transitioned from the straightforward pop of her primary school years to artists as varied as Avril Lavigne, Kehlani and Radiohead, she's now a maker of diaristic pop music with a scuzzy edge to it; by turns punky and soft, confrontational and exposing.

2003 in a house in Norwich. Two parents blast drum and bass awaiting the birth of their second child. It's their attempt to imbue rhythm and a flare for music into her DNA. It worked: They would bring a girl into the world blessed with those talents, albeit one unwilling to have her tastes steered. LOZEAK, the modern alternative pop protege, loves making her by turns vulnerable and hard-edged grunge-inspired music.

That unfiltered honesty and love for a left field approach is a huge part of who Lozeak is today. Having already cultivated a huge online following off the back of her covers and TikTok videos (over 557k followers and over 40 million likes), the artist -- real name Lauren Eakins -- is ready to prove that she has a sound all of her own, and the capabilities to create big, diaristic pop music with a scuzzy edge to it.

The story of her musical starts in that Norwich house, where she's lived her whole life. Her mum, hellbent on letting her kids express their creativity, took her to singing lessons as a baby and didn't think anything of it. "I just never really stopped after that," Lozeak says.

Around the house, she had early memories of music blaring daily. Her parents weren't musicians themselves, or in the industry, but eclectic fans of everything. Lozeak would dance to Madonna's "Hung Up" in the living room as her parents blasted it through the hi-fi system; a lot of Jamiroquai, Luther Vandross and Amy Winehouse too. Her mum even recalls her singing the words to "Rehab" as she was carted about the local supermarket. As a family, they've been going to Latitude every year since she was six, only missing the year COVID cancelled it. In a buggy, she'd get pushed through the crowd by her parents to see Florence and the Machine and Vampire Weekend up close.

Her sister succeeded her in music, becoming the protege Loz's parents perhaps expected her to become. They both got big sticker decals for the walls of their bedrooms: "My sister got musical notes," Lozeak laughs, "and I got Hannah Montana."

If anything, it's an oddly prophetic way of looking at Lozeak's rise to real fame, and a particular kind of exposed stardom that gives new artists nowhere to hide. Miley Cyrus, once Hannah Montana, may be the metaphor for transitioning a wild teen life into a bonafide, respected pop career; a future Lozeak herself is toeing towards. Only it's not something she's reckoning with in secret. She's comfortable -- great, in fact -- and able to hold her own.

By the time she reached high school, her dreams of becoming a singer were battling with what her grandad called "a Plan B." The only thing she developed a yearning for was midwifery ("I've never been scared of blood!"), and at GCSE level took all of the scientific subjects required to get there. But she realised how dull academia was, and it was enough for her to turn her focus to music. "I just never really thought it was an actual job before then," she said.

April 2019. She was working in a diner on the side. It dawned on Lozeak: "What am I actually doing here? I'm not going to be a producer, I'm working in a shit restaurant... I found it so annoying." It was her friend Josh who suggested she post a video on TikTok. "I was at work and it started blowing up," she remembers of that clip that earned her the attention. She later revealed the special voice she possessed too: expressive and lived in like an blues singer. These videos were garnering millions of views while she waited tables. Industry A&Rs reached out in their droves, but she took her time choosing the right team to represent her, settling on a deal with APEX Records/Parlophone under AMP Management.

With her cherry red hair, heavy monobrow and body covered in copious tattoos (following her dad's influence), you might be ready to frame her as a rebel. But she's not one; that's just how she's carried herself through life. "I don't think I've ever needed to rebel," she says. "But if being yourself is rebelling, I guess that should count!" She is part of the generation of young people that have utilised the internet as a space for personal emancipation, but it's also reminded them that reinvention isn't necessary: there are others out there, like Lozeak, who are making, rather than being shaped into, the moulds.

The origins of her grungy, rock-pop stylings might be partly inspired by the guitar music of her teenagehood, when she transitioned from the straightforward pop of her primary school years (like The Cheetah Girls and Lady Gaga) to artists as varied as Avril Lavigne, Kehlani and Radiohead.

Like a unique combination of all three and more, we meet Lozeak through the sound of "Word Vomit": a massive, scuffed up rock-pop number produced by The Nocturns (Bastille, Tom Walker). "Don't speak, please don't let it out / Trust me, words spill out my mouth," she belts, as the track builds layers and layers of heavy percussion and electric guitar on top of each other, culminating in a big, belted chorus. Inspired by a track her dad introduced her to, "Yeah Yeah" by Bodyrox, it's a widescreen anthem that perfectly captures people's desire to spread other people's business. "It's about friends in your life, who can't shut up!" she says of it, but it's not written out of malice. Instead, "it's written from a playful, sarcastic perspective, as if I took on that personality myself."

She joined forces with The Nocturns again for "Hate Me Too." She captures the crippling anxiety that comes from Gen Z self-reflection and over analysing in song form; a by turns vulnerable and exorcising arena anthem: "At the end of the day / I would hate me too if I was my friend," she sings softly before it implodes.

Then comes "Dumb": a hard-edged, guitar-heavy track produced by The Nocturns (Bastille, Tom Walker), co-written with Lozeak. It could fit over the opening credits of a 90s high school movie; a punchy takedown of an ex: "I don't wanna be the one to tell you like it is / You're crying on the telephone and acting like a bitch," she soothingly sings on its pre-chorus, before the song implodes into a thrash of distorted guitar and thumping percussion. "I had this boyfriend who was really weird so I broke up with him," Lozeak recalls of its inspiration. "Then his mum texted me telling me to date people my own age" She's comfortable airing these parts of her life through music. "I don't really care," she shrugs. "If someone thinks a song is about them, it probably is!"

Truly great pop artists with a love for what they do are anomalous in Britain, but in Lozeak we have a new hope: a normal Norwich teenager with the pipes and star power to make magic with her art. Whether the music she's making is punky and aggressive or exposing in its vulnerability, there's always an infallible throughline: what you're hearing is a reflection of Lozeak's thoughts and soul in song form. No bullshit necessary.