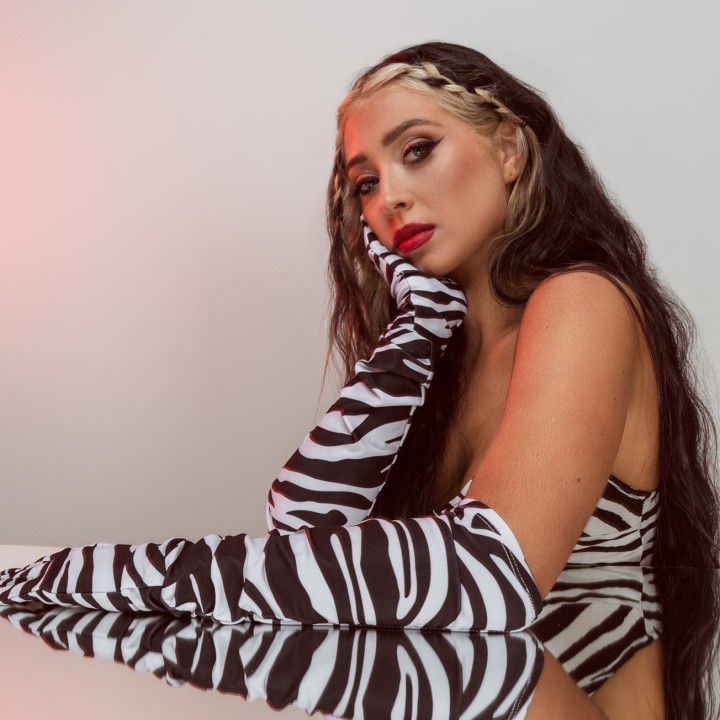 If you stumbled upon your best friend's diary, it might not even be this intimate...

Each lyric brings you a little closer to Londin Thompson. Candid confessions, off-the-cuff observations, and delicate details depict her life without posturing or pretense. For as unassumingly personal as the approach may be, her voice seamlessly stretches from gentle intonation into irresistible hooks. After independently generating millions of streams and landing on playlists such as Spotify's "New Music Friday" and more, her Republic Records debut tells a real and relatable story.

"I'm just a 20-year-old girl from Cleveland who goes through a lot and tries to write music you can relate to," she states. "I'd just love to make a difference with what I'm doing."

She immediately gravitated to music as a kid. Dad played guitar around the house as the entire family sang in church every week. With two older sisters, an older brother, and a younger sister, music bonded everyone together. She developed a passion for pop after filling an iPod Nano with favorites such as Fifth Harmony and Justin Bieber. In between school plays and musical theater, she wrote songs throughout high school and uploaded covers online. Opting to pursue a career instead of college, she chased her dream wholeheartedly.

"I was all signed up for school, but I realized it wasn't what I wanted to do," she admits. "I felt like it was time to fully go for it with my dream. My parents completely supported my decision and believed in me. It's crazy, because most parents won't do that."

Under her birth name Julia Thompson, she stirred up a buzz independently with the single "Hits." On its heels, "Spark" captured coveted real estate on playlists such as Spotify's Fresh Finds [713K followers] and Fresh Finds: Pop [86K followers]. Meanwhile, "Nights" graced New Music Friday [3.6 million followers]. As she cultivated a following, she also garnered airplay on MTV.

At the same time, she fashioned a focused style inspired by extremes.

"My sound is very poppy and girly, but there's a dark, different, and sexy side to it," she explains. "The songs portray my emotions, whether I'm going through highs or lows. I take time to work on all of the little pieces and parts to support what I'm saying and feeling."

Those feelings immediately resonate. In April 2020, she shared a snippet of "Wish It Would Rain" on Tik Tok, and it sent fans into a frenzy. Soon after, she inked a deal with Republic Records.

Now, she makes her formal debut with "Wish It Would Rain." On the track, dreamy guitar bubbles beneath vivid lyrics such as "Got invited to a party. I don't like what I'm wearing. I don't feel like drinking" and "Wonder what my sister's doing...I was going to call her, now it's getting too late." The chorus reflects a moment of longing for home as she launches a high-register bridge: "All these lonely people acting like they're not, I can't be the only one scared of getting lost."

"That song actually means a lot to me," she says. "I know I'm going to be moving to Los Angeles at some point, but the thought of being so far away from home is pretty terrifying to me. I'm so close with my family. I know the transition will be hard. I don't deal with change well, so it was really heavy on my heart. It's always nice weather in L.A. A lot of people are chasing the same dream as you are. Everyone is a go-getter. In the past, I've gotten homesick. When I feel those emotions, a part of me wants to listen to sad music. I feel like I want it to rain."

In the end, Londin welcomes you right into her heart with every song.

"When you listen to me, I hope you feel like someone is going through the same things you are," she leaves off. "I deal with the same amount of boy and friend drama every girl goes through. A lot of times it's tough to put those feelings into words. I want to be the voice for all of the phases of life we go through. It's meant to be a release for you."