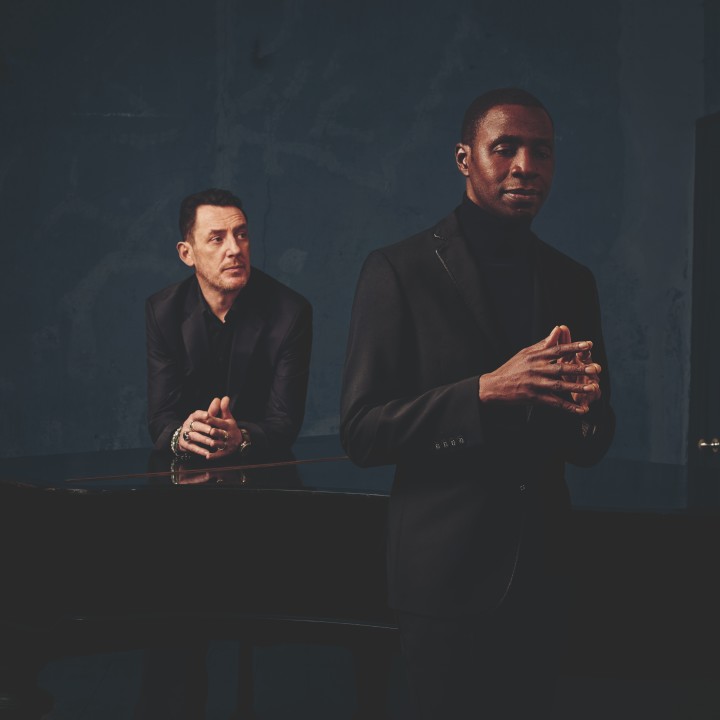 Era-defining songs. Ten million records sold. Twenty-five years’ music-making. Five Top Ten singles, four Top Ten albums. Chart-busting success in the UK, across Europe and in the Far East, Australia and New Zealand. A glorious singing voice that stopped the world in its tracks. And now, after a gap of 18 years, a return to the classic songwriting and lushly produced sounds that made them an instantly recognisable sensation…

Lighthouse Family: one of the biggest, not to mention omnipresent, British bands of the mid-late Nineties – discuss.

The evidence, frankly, is compelling. And it also might explain why they’re about to release their first album in 18 years: Tunde Baiyewu and Paul Tucker needed a bit of time to recover…

Their first single, "Lifted", was one of the defining songs of the era, an uplifting pop-soul classic that was inescapable on radio, becoming the soundtrack of high street Britain, drivetime Britain and night-out Britain. Three further hit singles followed: "Ocean Drive", "Loving Every Minute" and "Goodbye Heartbreak".

Together they helped the Newcastle-based duo of singer Baiyewu and keyboardist Tucker sell 2.75m copies of their debut album Ocean Drive – an album released in 1995, the high watermark of Britpop. By the end of 1997 – 154 weeks later – it was still in the album charts, going six-times platinum.

Trevor Dann, then BBC head of music entertainment, summed up their appeal: “Lighthouse Family make perfect radio records, deeply melodic but never bland and in a way that appeals to many different sorts of tastes."

Baiyewu and Tucker were everywhere, in every sense: touring, influencing other artists, joining the pop-cultural conversation – at, occasionally, the most unlikely of junctures. Their instantly recognisable sound impacted on musicians as diverse as Geri Haliwell and New Order’s Peter Hook. And, at a boomtime for British music, they hung out with everyone from Fatboy Slim to Shaun Ryder to Noel Gallagher.

That particular encounter was a thrill for Tucker particularly. As he said at the time: "There's something very strong and spiritual about what we do. We get thrown in with the likes of M People, but we're closer in spirit to the sort of thing you find in U2's 'I Still Haven't Found What I'm Looking For' or Oasis's 'Champagne Supernova'."

Looking back on an intense decade, the pair remember different highpoints. Tucker recalls the pressure to finish their second album, while running on fumes after the first album campaign. Baiyewu, meanwhile, a reluctant frontman pushed to the spotlight by his incredible, unmistakable, seemingly effortlessly soulful voice, recalls “countless” moments that demonstrated the uniting, elevating power of "Lifted".

“You’d have people telling you moving stories of what this or that song meant to them. This happened to me in Nigeria, too,” the London-born musician says of the country of his parents’ birth. “I was there on holiday, and they asked me to do an interview on a radio station in Lagos. These girls heard me on the radio, and they knew the people who ran the station, so they decided to pop in. And that’s how I met my wife!”

And then, as so often happens, the party was over, after a third album, Whatever Gets You Through The Day (2001). It produced another Top Ten single in the shape of "(I Wish I Knew How It Would Feel to Be) Free/One", an inspired mash-up of the U2 anthem and soul classic made her own by Nina Simone.

“It got very, very difficult,” admits Tucker. “We’d been doing it for ten years, and we hadn’t anticipated the scale it would get to. There isn’t a roadmap for this stuff. And we were living in each other’s pockets all the time. And we weren’t really getting on. It was a very difficult time.”

“Success brought its own tensions and pressures,” echoes Baiyewu. “And there was another catalyst – I lost my mum, on 1st April 2000, which always makes me think of death as a big cosmic April Fool’s joke.”

Complicating his grief was the status of his stepfather in Nigeria. Olusegun Obasanjo, a former army general, was at the time the President of Nigeria. Little wonder the loss of his mum was a time of upheaval.

“I felt the need to stop everything and go off and, well, just wander,” the singer remembers. “There were so many things dependent on Paul and I: musicians, managers, label, logistics. You need big shoulders to carry that.”

The two old friends went their separate ways. Back in Newcastle, Tucker formed a band, The Orange Lights. Heavy radio play in California and a new record deal came to naught. “And at that point, Tunde and I started talking again about this. For the last ten years we’ve been talking about doing Lighthouse Family again.”

Baiyewu, for his part, released two solo albums, Tunde and Diamond In A Rock. “I had collaboration in my DNA,” he reflects of that time. “But working alone was good therapy for me. I was able to express a lot of the feelings about losing my mum on those songs.”

But the old connection between the pair was always there. As Tucker says: “What happens when Tunde and I get in the studio is, we don’t have a row! We just kinda disappear. There’s no shouting or throwing things. We just drift apart, without actually saying anything.” Or, as he also puts it with a laugh: “We only had one argument but it lasted 20 years!"

Then, in 2010, they got back together, with a view to making a fourth album.

“We’d actually gone into the studio to try and write new stuff,” recalls Tucker. “We had new ideas, but somehow we couldn’t knock it together. As one of the Duran guys said to me one time: ‘What do you want to go in the studio for? That’s where all the arguments happen! Go and do some gigs…’ So, that’s what we did, and it was great.”

The old itch was still there, though, to the point where it was invading their unconscious thoughts.

“I called him back, and he said: ‘Listen, don’t say anything, hear me out…’ And he proceeded to tell me a story about Spike Lee and Paddy McAloon from Prefab Sprout, who Keith also looked after. And at the end he said that the record label had been hammering him to try and get Paul and I back together…

“So what do you?” smiles the singer. “You go with the flow…”

Bunkered in a north London studio, the old friends and collaborators quickly found their groove. Two early songs were Blue Sky In Your Head and Live Again.

Baiyewu explains that the sentiment of the latter, a beautiful balm of a song, reflects his culture, “where the view is that life continues. There is more to existence than what we can see and hear and feel. Even my full name says that: Babatunde, which means ‘father has come back’ and expresses the principal that you do live again. Nobody ever really dies.”

As for Blue Sky In Your Head, the rippling, rolling, mid-tempo piano ballad is the album’s title and opening track. Stuck in his Newcastle studio, Tucker admits to struggles with completing what the first Lighthouse Family song in an age.

“Then I had this thought of: I need blue sky in my head. And looking out the window in Newcastle, and you need blue sky in your head, ’cause it’s not in the sky! Then I thought, well, that’s kind of you what you want Lighthouse Family songs to do: put a Blue Sky In Your Head.”

It is, Baiyewu adds, similar to "Ocean Drive": “A dream of a place, a dream of escape, something you want to get away to.”

A good mindset, we might say, for the reunited band as well. They had a conversation that summed up both their old and new mindsets: “We’ve been bloody stupid, why has this taken us so long?”

“We’re very different people, yin and yang,” observes Tucker. "I envy Tunde’s calm. I’m much more… busy, for want of a better word. But when the two of us come together, something good happens. There’s a magic. And that’s there in both those songs.”

Then there’s "My Salvation", the first single, an upbeat, clubby track that flies high on lush strings and that echoes Pet Shop Boys at their imperial best.

“It was kind of a reaction to London now,” nods Tucker. “It just felt like everything was very fragmented. And it was partly about my son – he was just starting out in life, and I just felt this was a bit of a mad world… So you’re looking for that touchstone that salvation can bring.”

The irresistible and lovelorn "Light On", meanwhile, is pegged as the second single.

“It’s about somebody you love turning their back and walking away,” says Baiyewu. “And it expresses the spiritual principal of that presence that is always with you. This unseen thing looking after your best interests, pointing you in the right direction, lighting the path.”

“I think of The Great Gatsby,” chips in Tucker, “and this light at the end of the pier. It’s the lighthouse family, isn’t it?” he smiles.

Something else that’s Lighthouse Family: a sense of optimism and renewal. That’s there in the "Who’s Gonna Save Me Now?", a bittersweet song intro’d by evocative cello, one of a selection of string players arranged by Rosie Danvers (Adele, Noel Gallagher).

It’s there, too, in "Super Eight", which is destined to be huge live when Lighthouse Family go back out on the road, and which comes from the same DNA as "High".

“We’re trying to create something anthemic and uplifting but real,” notes Tucker.

There is, fittingly and reassuringly, more optimism in the closing Immortal.

“It highlights, firstly, the kind of song we like to write,” offers Baiyewu. “I like hymns, always have – I was in the choir as a kid – and "Immortal" is a typical hymn title. It’s about making the best out of life. I think all the songs on the record are like that. They’re urban hymns.”

“There are a couple of lines in there that reflect the fact that we’ve both lost people close to us to suicide,” adds Tucker. “One guy who was always there in the studio at the start of Lighthouse Family – he never got over a break-up… So we have the line: ‘When you say enough is enough, you feel like you could give it all up…’ When he went, we both wished we’d done something more.”

Messages of hope and uplift. Sentiments of community and communion. Songs of love and connection. Tunes to sing, loudly, from the heart.

It can only be Lighthouse Family, back to dream up the magic all over again.