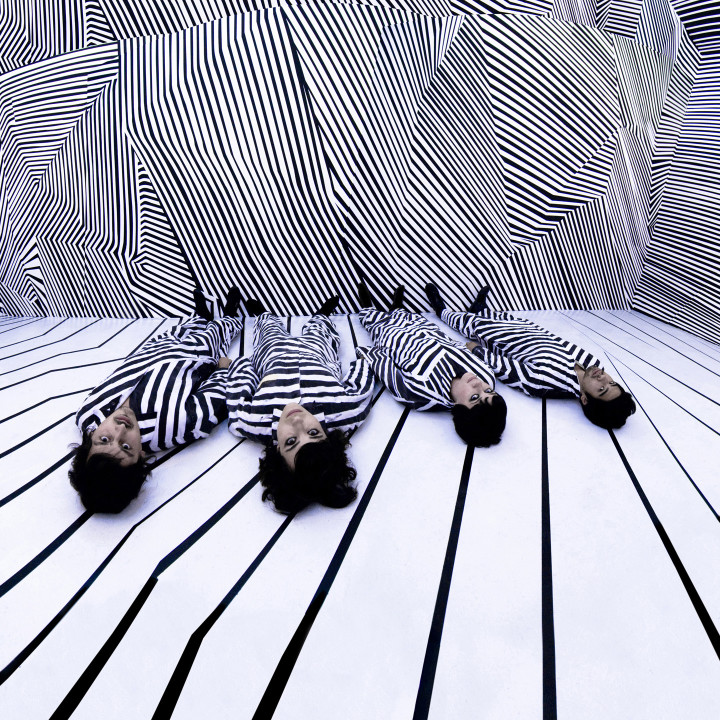 The first single from the album, "City of Angels," released on October 14, 2022, is their first new music released since 2019's critically acclaimed eponymous album. Over Ladytron's insistent analogue backing, the song inverts sensuous imagery into a vision of a near future collapse of cultural memory. "It's about forgetting," says Daniel Hunt, ."..how fragile it is," ."..not about one particular place or other, but a merging of them."

Beauty, disposability and fragility of the culture that surrounds us, and the exhilaration of freeing yourself from those structures... these are themes Ladytron return to on Time's Arrow. Crystalline melodies enveloped in icy textures and rippling arpeggios, shoegaze, disco, and industrial sounds that combine in their signature electro pop style. The mood of Time's Arrow is strangely optimistic, freeing -- utopian, even. Have they left dystopia behind? "We're already there," Helen Marnie points out.

Fittingly, Time's Arrow arrives as another moment from Ladytron's past recently returned, as the tides of the digital ocean moved in mysterious ways. Last month Ladytron celebrated the 20th anniversary of their formative 2002 LP Light&Magic. In mid-2021 the album's single "Seventeen" went viral on TikTok, sending the track into top 10s around the world. A new disaffected generation was introduced to Ladytron's music, with some 200,000 clips created, many of them with millions of views each. A twenty-year-old song by a group whose very existence predated social media itself: electronic pop quartet Ladytron.

As the strange rebirth of "Seventeen" shows, great work creates its own space. It never dies.

Originating in Liverpool, the band, made up of Helen Marnie, Daniel Hunt, Mira Aroyo and Reuben Wu, earned acclaim by relentlessly pushing boundaries, carving out new sonic and conceptual space and refusing to abide by formula or trend.

At the beginning they were known for shows in unconventional spaces, such as disused banks and bowling alleys, and placed emphasis on countries and cities other than their own. Thus the group's international recognition quickly grew -- playing shows in places where few artists went at that time, such as China and Colombia.

Along the way they twice took their primitive electronics to California's Coachella Festival, on relentless tours across Europe, Asia, North and South America, and were invited to perform with artists such as Bjork, Nine Inch Nails, and for Brian Eno at the Sydney Opera House. Eno remarked in an interview, "Ladytron are, for me, the best of British pop music. They're the kind of band that really only appears in Britain, with this funny mixture of eccentric art-school dicking around and dressing up, with a full awareness of what's happening everywhere musically, which is kind of knitted together and woven into something quite new."

Their minimal lo-fi debut, 604 in 2001, and its successor, 2002's synth-soaked Light&Magic, had Ladytron grouped with the so-called Electroclash wave, while 2005's Witching Hour saw them break out and win over a whole new audience. Pitchfork wrote: "Every quantum leap record has a quantum leap single, and in this case, it's "Destroy Everything You Touch." With a charging chorus and shivery production that sounds as equally indebted to shoegaze as it does synthpop, this is probably the most confident and menacing thing they've ever done."

2008's harder, darker Velocifero saw them grow further with the iconic singles "Ghosts," "Runaway" & "Tomorrow." They were then invited by Christina Aguilera to write and produce tracks for her forthcoming album.

A decade's retrospective was released in 2010, featuring a new single "Ace of Hz" and to follow, 2011's Gravity the Seducer took up a cinematic thread which had weaved through the previous albums with "White Elephant," "Mirage" and standout "White Gold." After another accompanying world tour that culminated in a euphoric sell out at the Los Angeles Wiltern, the band took a well-earned break.

In mid-2016 the band quietly began to write and record together again, picking up the trail with their songs and raw characteristics taken forward with a new palette of atmospheres and themes.

Released by complete surprise, "The Animals" was the first taste that came complete with a remix by electronic pioneer Vince Clarke, and a video clip filmed in the sprawling megalopolis of São Paulo. The track was unmistakably Ladytron, yet hinted at new horizons to come.

"It was the first new song we had, and with it we went almost immediately into the studio with Jim Abbiss, who has worked with us previously on "Destroy [Everything You Touch]."..and the Witching Hour album," says vocalist Helen Marnie "He's the producer who has really understood us the most."

Finally in 2019 their eponymous sixth full length album was released to critical acclaim, with Q Magazine calling it "Their finest record since 2002's Light&Magic." and that "Ladytron achieve near perfection here.," Mojo insisting that in "Dark times, Ladytron soundtrack them beautifully.." GQ described it as "Formidable machine music, full of urgency and menace." while NPR posited that "Ladytron seems enraptured at the idea of change, and of new beginnings in the face of a possible fiery end.." Blackbook called it simply "Ladytron at their absolutely most sublime."