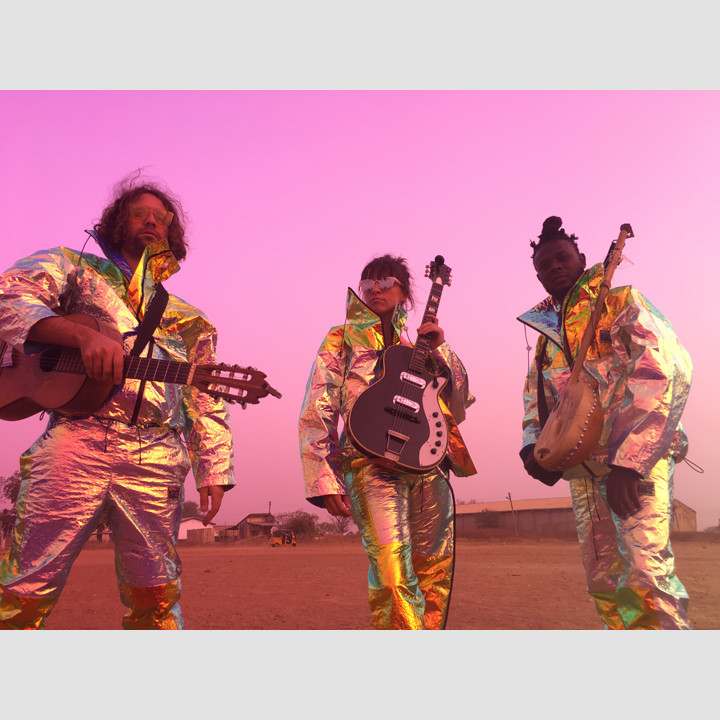 In February 2019, musician/songwriter Benjamin Lazar Davis and Lake Street Dive’s Bridget Kearney headed to West Africa to continue the life-changing musical exploration they’d begun five years before. Equipped with the most minimal of gear -- a guitar, two-channel recording console, and tiny toy keyboard -- the longtime friends soon struck up a collaboration with Stevo Atambire, a legendary Ghanaian musician and master of a two-stringed lute called the kologo. Less than a month later, Kearney and Davis returned to the U.S. with an entire album’s worth of material: the 11 wildly imaginative yet insightfully crafted songs featured on Still Flying, the duo’s full-length debut.

A work of profoundly joyful camaraderie, Still Flying has its roots in an impromptu session with Atambire, which was arranged by Colter Harper (an ethnomusicologist Kearney and Davis met during their 2014 trip to Ghana). Upon gathering in an empty café, the musicians soon found themselves swept up in an undeniable chemistry. “We were coming up with melodies and counter-melodies and it was all so electric,” Kearney recalls. “It was so exciting to experience this combination of sounds completely different from anything I’d ever heard.” As they worked with Atambire to shape the songs that now comprise Still Flying, they also teamed up with Aaron Bebe Sukura: a master of the gyil (an African wooden xylophone), and one of the figures most essential to their studies in a Northwest Ghanaian musical tradition known as Bawa. “I’ve never been a part of a record where everything came together so quickly and with such intensity and purpose, and I think that’s a testament to how inspired we were by working with Aaron and Stevo and Colter,” says Davis. “We never second-guessed anything, and the whole process was just magic.”

In each track on Still Flying, Kearney and Davis show their singular talent as both interpreters and innovators, reimagining traditional gyil parts and drum patterns in the context of their own graceful collision of folk and pop and indie-rock. Mainly recorded at a makeshift studio in Harper’s home in Accra (Ghana’s capital), the decidedly DIY album takes its title from a lighthearted track echoing the kinetic energy of their connection with Atambire. “‘Still Flying’ was one of the songs where Ben and I already had a lyrical concept going, and then Stevo came in and had us break down the theme and added to it from there,” Kearney explains. With its breezy back-and-forth between English and Atambire’s native tongue of Frafra, “Still Flying” unfolds in dreamlike storytelling that perfectly captures the everlasting high of youthful abandon. “That one was fun to write with Stevo, because it’s such a universal thing: those memories of being young and doing crazy things, and how the feeling of that time sort of stays with you for your whole life,” says Kearney.

With Kearney and Atambire trading off vocals all throughout the album, Still Flying kicks off with the wide-eyed reflection of “Endings/Beginnings,” a song celebrating the sometimes-terrifying possibility in rebirth and change. Lit up in effervescent beats and a radiant choir of childlike vocals, the track also speaks to the ceaseless experimentation that guided the album-making process. “During the 2019 trip we took a 16-hour bus ride to visit Aaron’s mom and witness where the music he was teaching us came from, and all night long there was music blasting with this super-sick bassline,” Davis remembers. “We had our phones out and started messing with GarageBand, and ended up coming with that melody and chord progression to ‘Endings/Beginnings.’”

One of the most riveting moments on Still Flying, “Dog Teeth” underscores the abundant attention and ingenuity that Kearney and Davis brought to the album’s rhythmic component. With its lyrics offering a layered meditation on cycles of aggression, the song’s shapeshifting rhythms took form as Davis electronically manipulated a particularly frenetic piece Atambire had performed on kologo. “The Ghanaian music we’re basing these songs on is mostly played at a really fast tempo, and the whole album is us slowing things down and creating a new kind of feel,” says Davis. “It was really exciting to not only be so inspired by this music we were learning, but also to bring something new to the table that we never would have created without having spent that time in Ghana.” The result is a mood both mournful and propulsive, setting the stage for lyrical interplay exploring broken love and friendships.

An album informed by a passion for musical discovery, Still Flying often finds Kearney and Davis chasing their curiosity to unpredictable outcomes. In creating “The Weatherman,” for instance, the duo drew inspiration from a musical fragment found on a USB stick given to them by a convenience-store clerk in Sukura’s home village. “We were asking around if anyone had any recordings of Bawa music to bring back home, and this guy at the convenience store filled up a thumb drive with a bunch of songs for us,” says Kearney. “There was one piece that really stood out because it had a lot of programmed gyil sounds and used a different scale, and when we got back to Accra there was this long process of transcribing everything, then disassembling and reassembling the different parts. Through all that, we ended up coming up with the backing track to “The Weatherman.” A soulful and groove-heavy number, “The Weatherman” is also threaded with sharply poetic commentary on climate change. “It’s about recognizing that the world that we live in won’t look the same very soon, unless we change what’s happening,” says Kearney. “It’s asking, ‘Could we be the last to see the world this way, in all its richness and beauty?’”

In the spirit of honoring Still Flying’s cross-cultural origins, Kearney and Davis adorned the album’s tracklist with two pieces of Bawa music, each performed by Sukura. “We wanted to put that cross-cultural aspect on display, rather than bury it or present these songs without context,” says Kearney. As she points out, Still Flying follows from years of a shared fascination with West African music, beginning back when the two friends were students majoring in jazz bass at The New England Conservatory. Not long after graduating, Davis journeyed to West Africa for the first time, a 2009 trip that included a chance encounter with Sukura. After several years of playing with Davis in myriad projects and sharing the stage at countless shows, Kearney proposed traveling to Ghana together to study the region’s music with the masters themselves. Their search for a teacher quickly led them to Sukura, who began giving them gyil lessons and later introduced them to Colter Harper (his fellow professor at the University of Ghana). Over the course of their four-week trip in 2014, Kearney and Davis seized on the overwhelming inspiration of their surroundings by recording with Harper at Vivivi Studios, resulting in their critically praised 2015 EP Bawa.

In looking back on the making of Still Flying, Davis recalls an especially poignant moment that transpired when Sukura brought them to a village inhabited by the Sissala people of upper west Ghana. “The chief was so excited about introducing us to his culture, and said how that was his job -- to promote the culture of the Sissala tribe,” says Davis. “It made me think how generous Aaron and Stevo were in sharing not only their personal takes on their music, but also the very deep history that runs within the tradition of that music. I was just struck by how much it means for all of them to make sure their music lives on not just in Ghana, but throughout the whole world.”

With the release of Still Flying, Kearney and Davis ultimately hope to extend that sense of connectedness to each of their listeners. “I’m so excited to celebrate the spirit of meeting these musicians from another part of the world who are just as passionate as we are about creating something new together,” says Kearney. “Hopefully when people hear the record, they can feel the same electricity we felt when we first played with Stevo, and had that incredible feeling of watching some flower we’d never seen before just emerge before our eyes.”